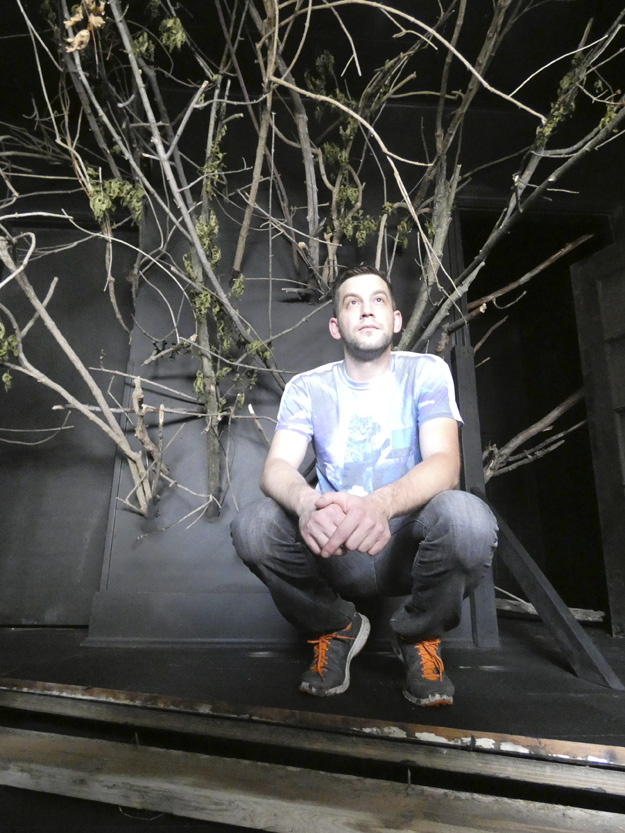 Tribune Chronicle/Andy Gray Dave Ruple, 30, of West Farmington incorporated elements from nature into his installation for "Occupied Warren," a joint project of Trumbull Neighborhood Partnership and the Fine Arts Council of Trumbull County.

WARREN — Door knobs, locks and other fixtures seem to float in midair and are piled in the corners of a second-floor room at 232 Vine Ave. NE.

It has a magical feel, like something out of a “Harry Potter” movie.

Look closer, and there are tags on many of those door knobs with the addresses for the demolished area houses from where they were salvaged.

Decay and reclamation are recurring themes at “Occupied Warren,” a joint venture between the Fine Arts Council of Trumbull County and the Trumbull Neighborhood Partnership and funded through a $4,842 grant from the Ohio Arts Council.

Artists have been working for months — during an unseasonably cold April and in the sweltering humidity of the last couple of weeks in a house with no utilities — creating site-specific installations for the different rooms that will be open to the public Friday and Saturday.

“There’s this old idea that artists suffer alone,” said James Shuttic, director of FACT, curator of the exhibition and one of the participating artists. “To see this many artists — a wide range of ages, races and sexes — come together and do something like this offers a bit of hope, and it’s inspiring.”

Cortland artist Dave Karr added, “This project as a whole blows me away. All of these rooms I walk into, I’m amazed at what they’ve created. I don’t know where you’ll see something else like this.”

The three floors offer a wide range of subject matter with the first floor dedicated to more family-friendly themes while darker images and topics are relegated to the top two floors.

Carl Henneman of Warren will incorporate live model, Bethany Caudill, into his installation, which was inspired by seeing a news story about a woman he knew who was caught up in sex trafficking.

“She was this clean-cut girl, and in a seven-year period, this deterioration happened,” he said. “I wanted to do something that reflected that — a killing jar idea of taking something beautiful and killing it for your own personal collection, and tying that in with what drugs and drug dealers are doing.”

Lydia Flowers of Warren created a giant 3D model of a brain cell that will hang from the ceiling in a blacked out room illuminated with a single light. She said she was trying to visualize how an idea begins.

“What does that transition feel like?” she asked. “I’ve grown up in quite a few rust belt towns where the factories have moved on. I’ve seen the different ways the different towns react and try to rebuild, and I don’t think Warren has found the proper transformation yet.

“I think that rebirth requires more creativity and flexibility than is present in this town, so in order to survive we’re going to have to change.”

Shuttic said many of the artists do address problems in the community, but it’s not all negative.

“Ginny Taylor’s room is about the community coming together, where we are and where we could be going in a positive light,” he said. “We have all angles.”

Gianna Jones, who graduated this year from Warren G. Harding High School, created a room with fellow artist Noah Diehl that is filled with images from the art that inspired them — everything from comic book characters to Vincent van Gogh. It also includes the quote, “I created this room in order to show that the solution to blight in Warren is creativity. As children we are surrounded by fictional figures that teach us to dream bigger and see the world for what it could be. We need to be more creative and imaginative people to turn our rundown buildings into works of art and innovation.”

Some of the art is portable and can be removed after this weekend’s events, but much of it was created on the walls of a structure that is destined for the same fate as the homes that provided all those door knobs.

“It is structurally sound, but it is one of those cases where the cost to fix it up and bring it up to livability and up to code is cost prohibitive,” Shuttic said.

Josh Ford of Youngstown will encourage visitors to take some of the pieces he created with them. Flowers said she’s definitely taking her piece home with her, and Jones is working to find a way to cut out the piece of wall that contains a reproduction of Johannes Vermeer’s “Girl with the Pearl Earring.”

Others were drawn to the temporary nature of “Occupied Warren.”

“It’s actually great,” said artist Dave Ruple of West Farmington. “Sometimes you make something, and it ends up on a shelf and you have too much time to think about how you made it, what you wanted to say and whether or not it was important. This lives in the moment, and there’s something special about that.”