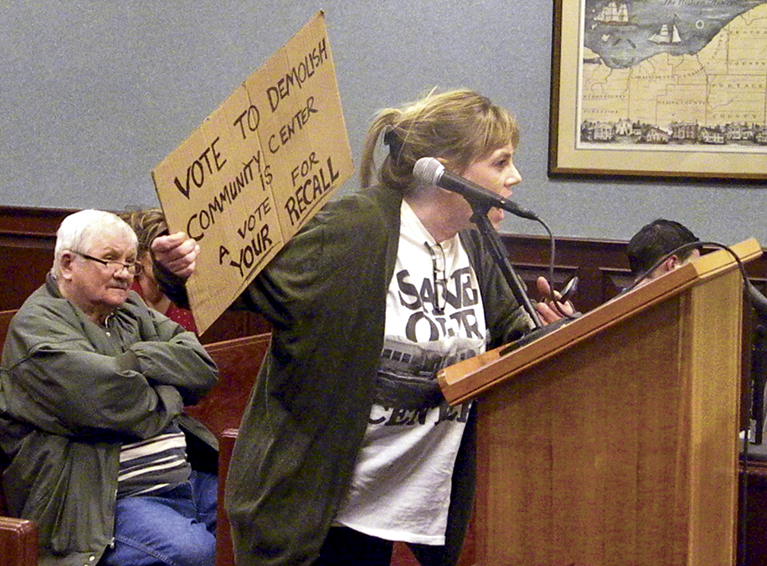 Newton Falls Historic Preservation Foundation member Lori Rankin holds up a sign while arguing in favor of preserving the Newton Falls community center. Residents voiced their objections to demolishing the community center at a city council meeting on Monday.

NEWTON FALLS — The community center here has received a reprieve, of sorts, from a date with a wrecking ball.

Council, faced with a recommendation from the village’s parks and recreation board to tear down the old structure on East Quarry Street and ask voters to fund construction of a new one, decided to give the Newton Falls Historic Preservation Foundation time to bring in a historian to plead their case to save the building.

So when council meets May 1, it should expect to hear from Everard H. Smith, a retired history profession from Wilmington, N.C., who focuses of historic buildings, especially United Service Organizations (USO) buildings like the community center was once. He will be given 30 minutes to speak.

The matter is drawing considerable interest from members of the community, several of whom Monday spoke out against razing the structure.

“To the Greatest Generation who fought in World War II, that building has significant meaning,” said former Mayor Pat Layshock.

Foundation member Werner Lange also argued to preserve the building based on its historical significance. He cited an article that ran in the Tribune Chronicle in 1942 from the dedication of the building. Former first lady Eleanor Roosevelt also sent a letter of praise to the building’s dedication when she couldn’t be present herself, said Lange.

“It’s the only original USO building in the nation that is closed and at risk of demolition,” Lange said. “It’s shameful that anyone would even think of demolishing it.”

In addition, the center was used for community events. Braceville resident Patricia Evans told council she’s known the center since she was a child, going there for everything from Christmas parties to baby showers.

“I was there every day for lunch and exercise,” Evans said. “Some of us seniors want someplace to go that isn’t 15 miles away.”

Another foundation member, Lori Rankin, said a vote to demolish the center would spell doom for members of council. Voters, she said, would vote them out.

The center closed at the beginning of January 2016 because the village did not have enough money to keep it open.