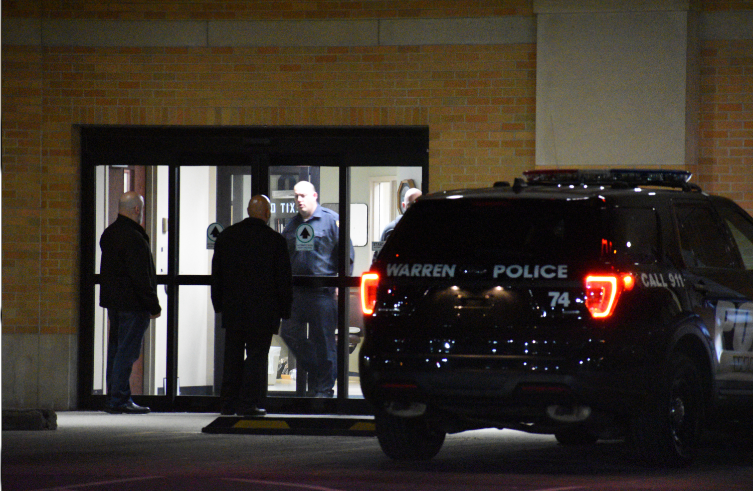 HOWLAND — Police from multiple agencies worked into the night following a gunfire exchange Monday between a motorist and a Warren police officer.

Warren Safety-Service Director Eddie Colbert said the officer approached what appeared to be a disabled vehicle on Pine Avenue SE and was fired upon.

Colbert and police Chief Eric Merkel said the officer was not hit, but returned fire.

“The incident escalated and shots were fired, we believe by both” Merkel said.

The suspect fled in possibly a black SUV and was at large, Merkel said at Trumbull Regional Medical Center, where the officer was taken for examination.

Merkel said the officer, whom he did not want to identify, was off duty but had a weapon.

After the gunfire, the officer radioed to dispatch, indicating that he was hit — or might have been hit. He was taken to the hospital to make sure he was OK.

“Your adrenaline is running and you don’t know if you’re hit,” the chief said.

The officer was later released from the hospital and was not injured.

A resident, who said the neighborhood is typically quiet, said police arrived with guns drawn.

Howland police are in charge of the incident because it began in Howland, and Ohio Bureau of Criminal Investigation most likely will come to the scene, Merkel said.

Weathersfield police worked the scene with a police dog. Cortland city police helped to block the roadway shortly after the gunfire exchange.