WARREN — Automobile sales in Trumbull, Mahoning and Columbiana counties leaped 16 percent in September from last year as dealers in the region continue to post numbers well ahead of the pace set in 2018. Mahoning Valley dealerships sold 5,006 vehicles last month to buyers across Ohio, up ...

YSU BUSINESS INTERNS: The internship program at Youngstown State University’s Williamson College of Business Administration recently provided seven YSU business students with full-time paid exporting internships in the region. This is the fifth year the the business college has partnered ...

NEWTON FALLS — Venture Plastics Inc. got the reason it needed to expand when it was awarded a contract to mold the plastic trunk finisher for the 2019 Nissan Altima. To make the part that protects the trunk’s latch mechanism, the company needed a new injection molding machine because the ...

AKRON — Akron Children’s Hospital, which has a large presence in Trumbull and Mahoning counties, is raising its minimum wage to $15 per hour. The change is effective Nov. 24. The increase also applies to all future hires in the system, which has campuses in Akron and Boardman and primary ...

LORDSTOWN — The Lordstown-built Chevrolet Cruze was the brand’s No. 5 best-selling vehicle in 2018. It remained in the top 10 into the first quarter of this year, but deliveries have plummeted. Now it ranks 15th among domestic deliveries, sandwiched between the Spark and all-electric ... 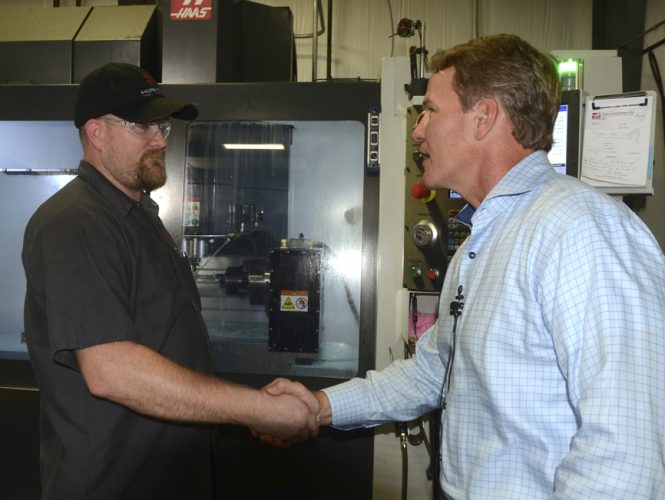 YOUNGSTOWN — Lt. Gov. Jon Husted’s statewide workforce development tour was in Youngstown on Tuesday to promote Ohio’s latest initiative he said is a win for businesses in need of highly skilled talent and for employees to develop new and better skills. The event at Kiraly Tool and Die ...

Local gas prices at or below average

Wagering down at racino

AUSTINTOWN — Wagering in August on video lottery terminals at Hollywood Gaming at Mahoning Valley Race Course was down about $2.2 million from July, but far outpaced that of August 2018. The facility on state Route 46 saw $113.4 million in credits played, down from $115.7 million in July, ...

STEM EXPO AT YSU: Youngstown State University’s College of Science, Technology, Engineering and Mathematics (STEM) will host a STEM Expo noon to 4 p.m. Thursday at Stambaugh Stadium, Gymnasiums A & B. Employers will attend to recruit and fill available internships and co-ops, and ...

VIENNA — Immediately noticeable at the new headquarters of the Builders Association of Eastern Ohio and Western Pennsylvania, in addition to the lingering new building smell, are the exposed structural steel beams and other visible systemic elements. “That was done purposefully so you can ...

TBEIC gets rebranded as Brite Energy Innovators to reflect future

WARREN — It took Rick Stockburger more time to explain the meaning of TBEIC than it did for him to describe what they did at the Tech Belt Energy Innovation Center. People often mispronounced the acronym, too, and the name wasn’t so much inclusive of the community, nor did it really ...

WARREN — Sales of single-family homes in Trumbull County through August are keeping the pace set for the same eight months last year, and they’re selling at a faster clip and for a higher price. There were 1,398 closed sales countywide, down just 0.1 percent from 2018, according to ...

WARREN — Trumbull County’s unemployment rate fell in August by 0.1 percent from July, but the county jumped two spots and is now tied for fourth worst in Ohio, according to numbers released Tuesday by the Ohio Department of Job and Family Services. Mahoning County’s rate remained at 6.1 ...

WARREN — More than 100 colleges and businesses are invited to attend a college, career and trade conference Oct. 29 at the Eastwood Mall. It’s expected more than 3,500 students in grades 8-12 in Trumbull County will attend the event at the former Sears store. It’s open to the to public ...