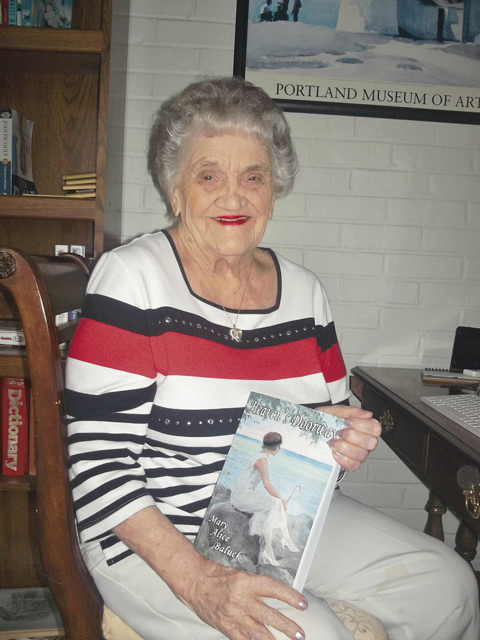 Mary Alice Baluck, 92, of The Blackburn Home Senior Living and Independent Community in Poland, published her first novel, âHeavenás Doorway.ã The retired junior high school English teacher said her new career as a novelist gives her a reason to get up each morning. (Submitted photo)

POLAND — It was a trip to Kelleys Island more than 40 years ago and hearing the story of the area’s only unsolved murder mystery that planted the seeds that flowered into a 92-year-old Mary Alice Baluck’s first novel.

“Heaven’s Doorway” traces the lives of three generations of women in a family that traveled from Ireland to Canada and finally to the Lake Erie region in the United States between 1880 and 1928.

Although also set on an island and drawing from the scenery, Baluck said her novel bypasses that crime.

“It’s not a murder mystery at all, but it is that story that inspired me and stayed in my mind all those years,” she said.

According to her book listing on Amazon.com, “Heaven’s Doorway” tells the story of Brigid Walsh, her daughter Maggie Mahoney and granddaughter, Maura Ryan. It vividly tells how the three women suffer terrible losses and significant triumphs. Along with dozens of well-drawn characters, Lake Erie is an abiding and powerful presence, sometimes menacing and and sometimes calming.

“I already have an idea for a third novel,” Baluck said.

“I never dreamed of having a book published, but this has been a dream come true.”

Baluck grew up in Youngstown, not far from Youngstown Sheet and Tube Co., where her father and grandfather worked. After graduating from Woodrow Wilson High School in 1945, she started nurse’s training at St. Elizabeth Hospital. She left that pursuit a year later and soon after “married my handsome high school sweetheart at age 20, and we had six great kids.”

Baluck spent most of her 20s and 30s working as a full-time housewife and mother.

“At age 33, I was given the opportunity to go to Youngstown State University, and I grabbed it,” she said. “With the help of my family and the constant encouragement of my oldest daughter, Linda, I was able to finish in seven years, and at age 40, I graduated with a B.A. in education and a minor in English.”

Daughter Linda Pompeii said, “By the time all six children were born, we were living on Hopewell Drive in Struthers. That sixth child put us over the top in that house, though, so we moved to a larger home on Fifth Street in Struthers. So, always Struthers. We figured my brother would be the mayor. He’s not, but my other brother is a councilman at-Large.”

The Youngstown Diocese offered the YSU study program in exchange for a commitment to teach in the diocesan Catholic schools for a period of time.

Baluck said she retired with 24 years as a teacher.

Although never desiring to become a published author, Baluck has been writing poetry and short stories since her pre-teens. She often wrote poems and did other writings, but never sought to have them published. She would show them to friends and loved ones and then tuck them in a file folder or envelope.

“I’ve always loved words and I’m fascinated by history and cultures,” Baluck said. “My father, Richard (Barholomy), used to tell my two sisters and myself stories every night. He was a teller of tall tales. It was a game in our family.”

Baluck believes listening to her father, as well as her youngest sister, was where she developed her love of stories and of the English language.

“My husband passed away in 1999, and although I had always written short stories and poetry as a pastime, I had never seriously thought of writing and publishing anything until he died,” she said.

Baluck said she had not placed pen to paper in the writing of the novel until four years ago.

“It just stayed in my mind,” said Baluck, who has lived at The Blackburn Home Senior Living and Independent Community in Poland for the last 2 1/2 years. “This is a character study. It is about the growth of town.”

It was approximately a year ago, when one of her caretakers, Kathy Sabol, was reading through some of Baluck’s letters and poems that she was given the unpublished novel that was written and set aside about four years ago.

Sabol began to push Baluck to get the novel published.

“She was very encouraging,” Baluck said. “She encouraged me to find a publisher. She pushed me. I don’t think I would have done this without her encouragement.”

“I have macular degeneration, so I’m legally blind,” Baluck said. “I can see shapes, but I cannot make out details very clearly.”

The new computer program allows the font on the computer to increase to 72 points or greater, so she can see what she is typing.

“The staff here, especially director, Michele (Rudge) have been very encouraging,” Baluck said. “They take to time to check on me and what progress I’m making.”

Sabol said the self-published novel was edited by area residents David and Lenore Dvorkin. Baluck self-published the book in June, two months ahead of her 93rd birthday.

Pompeii said, “My mother has an active inner life where the people, places and ideas she writes about are actively percolating most of the time. This keeps her mind busy, which is important. She continues to be blessed with strong language and cognitive skills that give her the ability to maintain a focused narrative.

“She’s always been very articulate and capable of logic and argument, to wit, my dad always used to tell her that if they ever got a divorce, he wanted her for his attorney.

“She’s a natural storyteller from a family that enjoyed telling stories,” Pompeii said. “In fact, I’d say it was their primary form of conversation. Even if it was just a trip to the store, it was reported in story form — often way longer than they needed to be.”

Baluck said, “This has been a God’s blessing to me. It gives me a reason to get up every morning. It has given me a purpose. Not everyone has that, especially at my age.” 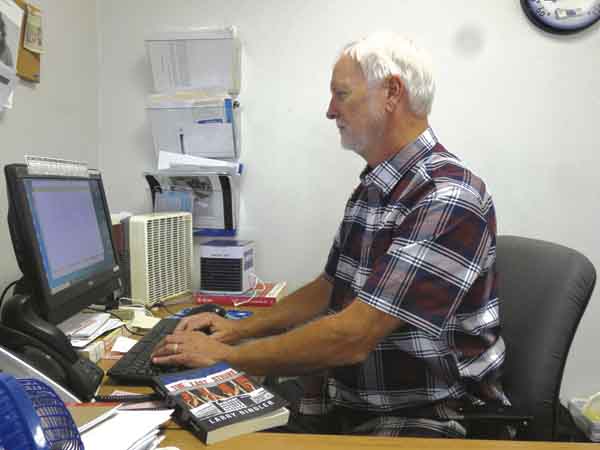