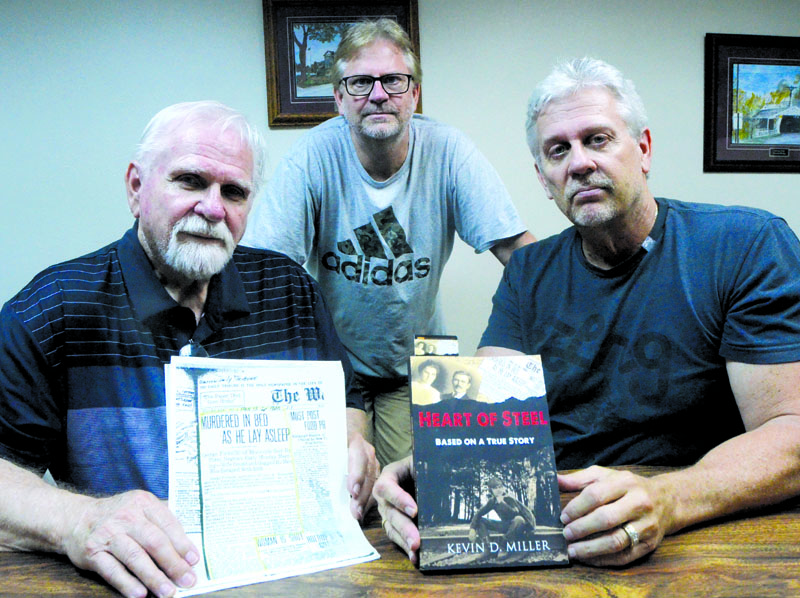 From left, Bob Miller with sons Craig Miller, standing, and Kevin Miller, display news clippings and book Kevin wrote based on family history that involved a murder in Southington, a breakout from an orphanage and family secrets. (R. Michael Semple)

SOUTHINGTON — A news clipping passed to his uncle triggered the unraveling of family secrets surrounding a murder in Southington.

“My Uncle Rick was at a funeral. One of his cousins handed him a newspaper article,” Kevin D. Miller, now of Burbank, Calif., said. “He called and said, ‘By the way, our last name isn’t Miller.'”

It was, in fact, Puchalski.

“We had an identity crisis when we first heard this,” he said.

Kevin’s younger brother Craig Miller of Maricopa, Ariz., said, “We could never do the genealogy past Miller. Beyond that, we were lost.”

Kevin Miller launched his quest to uncover his family’s true history. His research found stories both horrific and heroic.

A MURDER IN SOUTHINGTON

On Sept. 13, 1920, Kevin Miller’s great-grandfather, George Puchalski, 49, was shot in the head while he lay sleeping in his bed.

Kevin’s great-grandmother, Stella Puchalski, told police that at 1 a.m., three men broke into their farmhouse a little northwest of the corner of now state Route 534 and Helsey Fusselman Road, bound and gagged her, murdered her husband, and escaped with $600.

“Coroner Henshaw stated this morning that every indication was that the man had never known what killed him,” the Warren Daily Tribune reported. “Evidently, the men had walked to the side of the bed and placing a revolver near his right temple, fired. The bullet tore clear through his head, bringing instant death.”

Stella’s story broke down quickly. Within a week, she and two co-conspirators had been arrested.

Investigators found there had been no break-in nor a theft. Stella had paid her brother-in-law, Frank (Olesyski) Syski (accounts at the time spelled the name as “Sesci”), 26, of Lisbon, the $600 (some accounts list the amount as $500) to murder her abusive husband.

Syski told investigators that he and Vincenzo Georgevitch waited in the woods for Stella to signal with a lantern when George Puchalski fell asleep.

The killing was supposed to happen a night or two earlier, but they drank too much while waiting for the signal and had to postpone the murder.

Syski told investigators that when it came time to commit the act, he was shaking. “He had been drinking raisin jack, he said, and his hand was unsteady,” the newspaper reported. “In order to assure the bullet going straight, he alleged Mrs. Puchalski held his hand while he pulled the trigger.”

In her confession, Stella Puchalski maintained that she was not in the room when the shot was fired.

Syski also exonerated Georgevitch, who he said had no idea of the real reason they went to the Southington farm.

Kevin Miller said the Puchalski kids were bullied. Stanley knew he must keep a promise he made to his mother before she was sent away to take care of his siblings.

Stanley, 12, ran away from the orphange, scooped up some money his mom had hidden at the farm, and hopped a train for Chicago. It was the era of Prohibition, and the boy earned cash working as a speakeasy lookout and mixing with bootleggers.

Stanley harbored no intention of becoming a gangster himself, but taking their money would help him free his family, Miller said.

Five months later, Stanley Puchalski returned to Warren with cash. The 13-year-old bought a car and secured a house. In the middle of the night, he climbed up the three-story Victorian house, crawled through a window, and broke his siblings out of the orphanage.

They eventually settled near Canton and Stanley raised his brothers and sisters for the three years their mother remained in prison.

They adopted the surname of Miller and swore to never reveal who they really were.

“My grandfather died Nov. 25, 1985,” Kevin Miller said during a September visit to Trumbull County. “Even on his deathbed, he didn’t say who he really was.”

WRITING TO RIGHT THE RECORD

“The truth is my Great-Grandfather George was abusive,” Kevin Miller said.

He said he believes the marriage was arranged in Poland when Stella was 13 and George was 23. They were married in 1905, and in 1919, bought the farmstead in Southington.

George Puchalski is described as a “good ol’ boy” who bought drinks for everyone. The whiskey fired up his violent tendencies. “My great-grandmother lost six kids through miscarriage from his beatings,” he said.

Great-Grandmother Stella endured the thrashings, but when George turned his rage on their oldest daughter, she had to put a stop to it.

In those days, domestic violence was considered more of a family’s private business and no place for the law to get involved, Miller said. So she enlisted her brother-in-law to put an end to it for the sake of her children, he said.

“It’s hurtful even writing the story,” Kevin Miller said. “It’s hurtful to think my great-grandfather could be that mean and cruel.”

Earlier this year, Kevin Miller published a book titled “Heart of Steel.” He calls it historical fiction based on a true story — his family’s secret story.

He pieced together everything he could find, from news accounts to court documents to stories various family members recalled, to lay the foundation of the record of the Puchalski family. He was hampered by vows of silence and from inconsistencies in records. For example, “Puchalski” is spelled “Puchaelki” in some of the accounts.

A retired website developer and technical writer, Miller filled in the gaps from suppositions, imagination and growing familiarity with the characters.

He dedicated it “to my grandfather Stanley William Miller, the patriarch who gave us our family name and our legacy. To my father, who encouraged me to write his story.”

“As a child, I knew my father stole his siblings out of an orphanage,” Robert Miller said. “The story was that his mom was in prison for making bathtub gin.”

It was in Canton that Robert’s dad met the woman who would be his mother, EmmaMae Flagg. Stanley and EmmaMae were married in 1926. It was she who is credited with helping Stanley Miller through his journey of healing and finding peace. They had three sons, Bill, Robert and Rick.

In his book, Kevin Miller writes, “None of his children ever knew the real story of their father, Stanley William Puchalski, and the family tragedy that defined his life and the lives of his siblings. They never knew the oath of silence they swore in 1921.”

What they knew, Robert Miller said, was a legacy of caring — including from his grandmother.

“My grandmother Stella (Poulos) was a wonderful, loving, passionate person,” Robert Miller said. “They (she had remarried) had a farm around Salem. They sold produce. I would spend two weeks in the summer with my grandmother.

“As the grandson of Stella, I have the greatest admiration for what my father did, and my father carried on with that love with his own family.”

His guess on why the family name was buried was because of the embarrassment and scandal.

“This is probably the most unusual story that could be,” Robert Miller said.

Kevin Miller ends his novelization of the family history with these words:

“Stanley William Miller left his legacy through a passionate Heart of Steel. A heart that knew no limit of love or sacrifice. Nothing was more important to him than his family and eventually his love and acceptance of Jesus Christ.

“The Miller clan lives on through all the generations that follow the young farm boy from Southington, Ohio. Remembering and honoring the patriarch who gave them all their name, their family history, and their legacy.”

The book is available on Amazon and at the website heartofsteel book.com

Sherri Mamounis, 56, of Youngstown, gets paid to be the live-in caretaker for her twin sister, Sheryl Lasky, who ...

July is a busy month