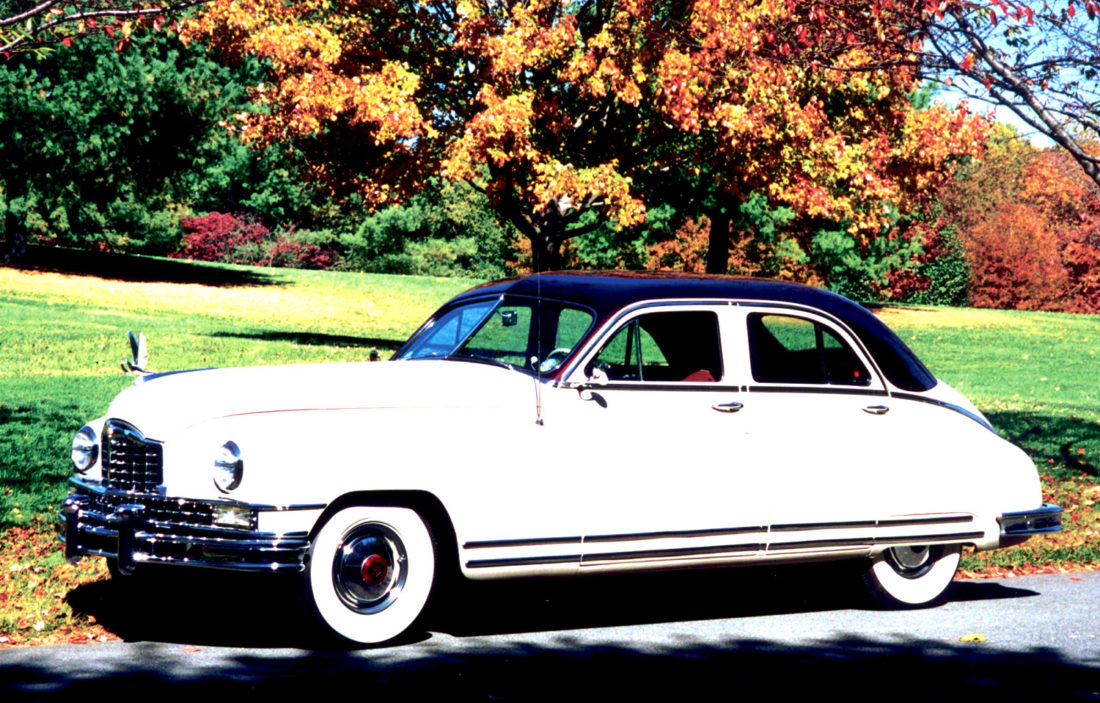 During the 1999 celebration at the birthplace of Packard automobiles in Warren, Hal Hermann carefully looked over more than a thousand Packards from around the world on display. What he found most impressive was the quiet 356-cubic-inch, L-head engine introduced in 1940.

The powerful straight-eight-cylinder powerplant, contained nine main bearings, as well as a 105-pound crankshaft, and developed an awesome 160 horsepower. Hermann went home determined to get a prewar Packard model with a majestic 356-cubic-inch engine. The search led to a 1948 Custom 8 Touring Sedan. It sold new for a base price of $3,750.

Hermann talked for hours over the telephone with the owner of the Packard and photographs were sent to add more information to the decision-making process. Eventually, Hermann had garnered as much data as he could without seeing the car in person. The moment of truth had arrived.

“I had to swallow pretty hard,” Hermann says, “to buy it on a picture.” After wiring the money to the owner, with fingers crossed, he awaited the arrival of his Packard.

When the Packard finally arrived its battery was dead. Hermann, anticipating such a happenstance, had an appropriate battery ready. With it, he was able to start and drive his 4,175-pound Packard. “It ran beautifully and only needed points and a coil,” Hermann reports.

From headlight to taillight, the side panels are smooth. The traditional cormorant hood ornament towers over the special front bumpers. In addition, the same egg-crate grille motif carries over into a faux grille on the rear of the car below the trunk lid, incorporating the taillights into the design.

Under the hood — which opens from either side — on top of the big engine, is a two-barrel, dual downdraft, Carter carburetor with an automatic choke. “This engine is the ultimate refinement of the big straight-eight,” Hermann explains. The 160-horsepower engine features “Safety Sprint Acceleration,” which reduces engine speed by 27.8 percent with the overdrive engaged.

The owner’s manual boasts of “Flite-Glo” instruments and “Comfort-Aire” ventilation, along with “Tru-Course” steering. The dashboard houses an AM radio with four vertical push buttons. Across the face of the dashboard, in what appears to be a continuous strip of chrome, are disguised buttons to activate the lighter, headlights, instrument lights, map light, fog light and heater fan. Ankle-level vents are operated by knobs under each end of the dashboard.

One feature offered only by Packard was the fuel filler “Ventalarm.” The owner’s manual instructed the driver: “Tell the attendant to fill it up until the whistle stops.” Only Packard had a whistling warning in the 20-gallon tank. The 20-quart cooling system worked by air drawn through the radiator by the five-blade, 18 1/2-inch fan.

Other literature boasts that “Packard achieves a rare blending of great roominess, lavish appointments and an unbelievable ease of control.” Hermann subscribes to Packard’s claims. “I bought it already done,” he says. “I just drive it.” The farthest he has driven it is 300 miles in June to a national Packard meeting in Canandaigua, N.Y. He says the car has performed flawlessly.