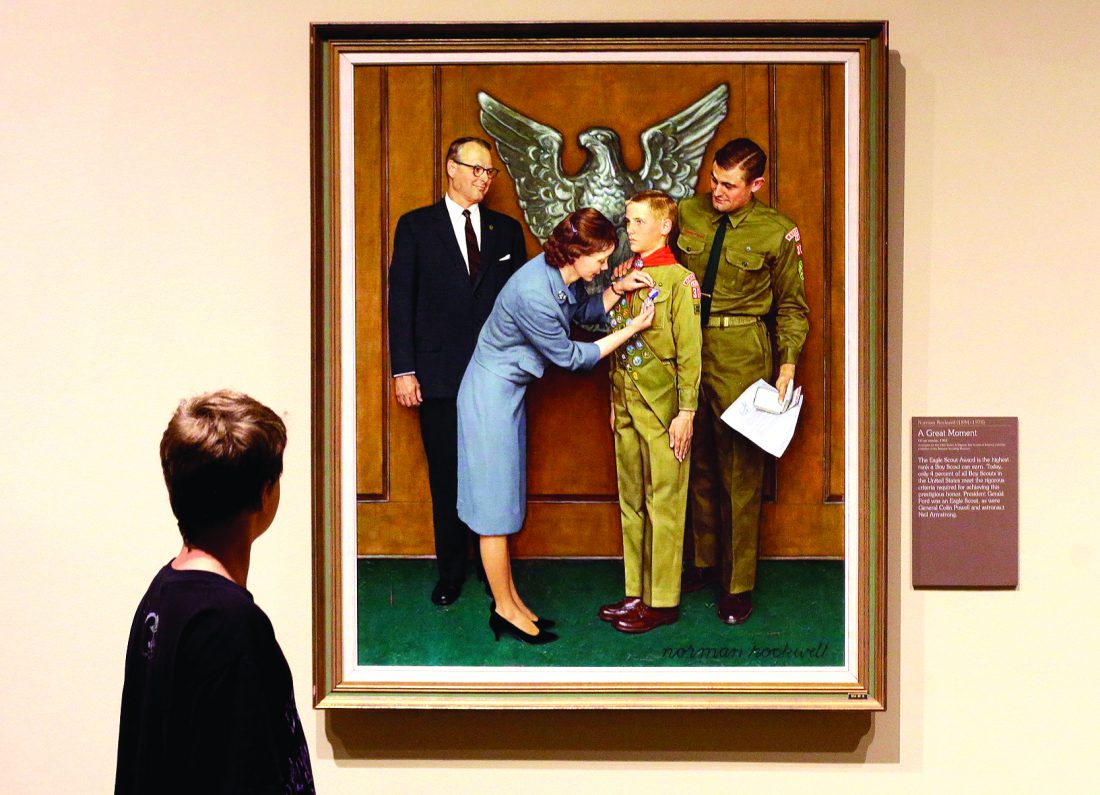 The Butler Institute of American Art Board of Trustees voted this month to table for one year deciding on a chance to become custodian of an art collection that includes more than 66 original Norman Rockwell works valued at $130 million.

The delay could mean losing an opportunity to showcase the second largest collection of original art by Rockwell, a renowned American artist. The decision to table the matter is based largely on fears of a stigma that the artwork is owned by the Boy Scouts of America.

Howland attorney Ned Gold, a member of the Butler board who worked for two years to bring that collection to the Mahoning Valley, called the decision “incredibly disappointing.”

John A. Anderson, a former Butler board member and director of Foundation Medici, the not-for-profit group that funded the construction of the Butler’s Trumbull branch in Howland, equated the decision to censorship.

“It is not even censorship of the art but of the art’s owner,” Anderson said. “Is the Butler prepared to censor art on an ongoing basis out of irrational fears of how its patrons and the community might view various works of art for varying reasons related to the subject, the artist, the history and character of the artist and, incredibly, the owner of the art and who knows what other reason?”

Louis Zona, executive director of the Butler, said a Wall Street Journal article in December about potential legal and financial challenges the Boy Scouts of America face from past child abuse allegations led to the board’s decision, despite initially approving the plan in September.

“We’ve worked very hard here to maintain a solid presence in a conservative community like ours,” Zona said. “We’re very proud of our reputation. Could it have been hurt by this? I don’t know. But I think that was certainly a consideration when they decided to table this.”

The Boy Scouts of America, or BSA, announced in 2016 that it was closing its museum next to the national office in Irving, Texas, and moving it to Philmont Scout Ranch in New Mexico. The BSA decided not to move its fine arts collection to the National Scouting Museum at Philmont because that facility was not equipped with the security, climate controls and other necessities for fine art preservation.

The collection includes about 350 pieces, nearly all of which are Boy Scout-related, but the main attraction is the 66 works by Rockwell, the renowned artist and illustrator. The BSA was one of Rockwell’s first employers, hiring him to create pen and ink drawing for its “Hike Book” in 1912. He produced scout images for Boys Life and the Saturday Evening Post as well as paintings used for the Boy Scout calendars issued by Brown and Bigelow.

The BSA owns the largest collection of Rockwell works outside of the Norman Rockwell Museum in Stockbridge, Mass.

“When I found out what was going on, I went on a quiet crusade to, one, stop the sale, and two, get the whole collection for the Butler,” Gold said.

Gold, 77, said he’s been involved in scouting for nearly 70 years. Anderson said that’s an under-estimation. “Ned came out of the womb in a little-bitty uniform,” he quipped.

Gold put together a presentation, stressing the Butler’s focus on American art; its proximity to Summit Bechtel Preserve in West Virginia, the site for the National Boy Scout Jamboree and the 2019 World Scout Jamboree; and how 70 percent of the U.S. population lives within a day’s drive of the Mahoning Valley. He included letters from Gov. John Kasich and other elected and community leaders in support of bringing the collection to Ohio and the Butler.

“They (Boy Scout officials) came here on Aug. 20 to view the facilities,” Gold said. “First they saw Howland. Loved it. They stayed at the Avalon Inn and that night over dinner they said, ‘You’ve got it.’ The next morning they saw the Youngstown Butler and were very impressed. Then we started working on the agreement.”

The Butler would pay the transportation costs to move the collection from Texas, cover the costs of insurance and preservation and pay $100,000 to the BSA. If they did not have the collection for at least two years, the $100,000 would be returned.

The Butler board unanimously approved a resolution in September, and plans already were underway to display half of the Rockwells in Youngstown and the other half at the Trumbull branch.

At the September board meeting, Gold said, “I was given a standing ovation. The other day I felt like I was trashed.”

Attitudes about the acquisition changed Dec. 12, when the Wall Street Journal reported the BSA was exploring all options, including filing for bankruptcy, to protect itself from the potential lawsuits that could happen as states lengthen and eliminate the statute of limitations on sexual assault claims.

“What could be worse?” Zona said. “That really hit home. Everybody understands bankruptcy, which they are facing, but the other is very different.”

Gold acknowledged there have been Boy Scout leaders accused of abuse, which he called a societal issue that has affected many institutions that deal with children, not just the Boys Scouts. And he argued that the BSA does not try to bury those allegations when they occur. For 10 years, Gold served as youth protection chairman for the central region covering 13 states and has first-hand knowledge of the organization’s procedures.

“All great organizations have bad characters,” Gold said. “The test of the organization is what they do with bad characters. The BSA gets rid of them fast and then carefully takes care of those who have been injured. … We do not hide. If there is a credible allegation of actual abuse? Straight to the authorities.”

The BSA agreed to waive the $100,000 payment, reducing the Butler’s financial risk. Gold tried unsuccessfully to allay the board’s fears.

To Gold, the board’s decision is a missed opportunity for the Valley. This summer, 43,000 scouts from 133 countries will be five hours away for the World Scout Jamboree in West Virginia. Many may have included a visit to see the collection as part of their trip to the United States.

Beth Kotwis Carmichael, executive director of the Trumbull County Tourism Bureau, said, “I feel like this collection could have drawn from a wide audience and brought them into the area. It would be disappointing to hear this collection landed in another museum when we could have had it here.”

The Norman Rockwell Museum in Massachusetts had nearly 137,000 visits in 2018 and Margit Hotchkiss, its chief marketing officer said more than 70 percent of the museum’s visitors come from out-of-state.

“Five percent of our visitors are international, and we pretty much hit every state,” she said.

Zona doesn’t believe the deal is dead. He forwarded an email sent Dec. 27, 2018, by John H. Green, former group director of general services for the BSA, who wrote, “With those circumstances in mind, we think it best to table our discussions for the time being. We still believe it may be possible for The Butler to showcase these marvelous works and we earnestly wish to keep that door open.”

Effie Delimarkos with BSA Communications responded to an email sent to Green asking how long the Boy Scouts would wait for a decision from the Butler with, “We hope and look forward to a day in the future when these iconic works may be displayed at the Butler Institute of American Art.”

Zona said, “When I say we’re hoping to look at this again, I mean it, and we are.”

Gold fears the board can’t wait a year to make that decision, which is for how long the board tabled the motion.

“I’m bewildered by the view that this great institution of the Butler would censor this collection of Norman Rockwell paintings because of the subject matter of the paintings and the ownership of the collection,” Gold said. “I’d like to see them revisit the decision and take the collection.”