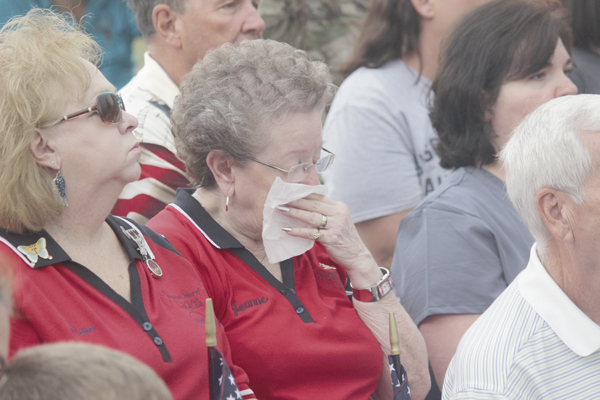 Jeanne Eakins of the Fraternal Order of the Austintown Eagles cries during a speech about September 11 during a memorial service held Wednesday evening in 9/11 Memorial Park in Austintown.

Lightning silently sliced the sky as the Steel Valley Pipes and Drums police and fire memorial band finished a rendition of taps under stormy weather, and a Wednesday memorial in Austintown for the tragic events of Sept. 11, 2001, came to a close.

Several hundred people gathered in 9 / 11 Memorial Park on South Raccoon Road to remember the 2,993 people who died and honor first responders and others who put their lives on the line, both in duty and on that day.

“They ran into the fire,” Mahoning County Commissioner Anthony Traficanti said of those first responders.

“We as first responders, as members of our military, as citizens of this great nation answer the call,” he said.

Skowron visited the national 9 / 11 memorial in 2018 while representing Austintown at the National Homeland Security Conference in New York. The memorial rests in the footprints of where the Twin Towers once stood.

“As you walk toward the memorial, the air becomes increasingly heavy and silent,” said Skowron. He described water falling to eternity and the bronze names of those who were lost.

The Austintown 9 / 11 Memorial Park is just one of seven in the country that include relics from all of the sites impacted by the terrorist attacks of that day, according to Austintown Trustee Jim Davis. Originally Trustees Park, the area was renamed in 2004 after Pat Connolly spearheaded an effort to build the memorial. The park includes beams from the 91st floor of the twin towers, bricks from the Pentagon, and an urn with soil from the site where the fated Flight 93 was brought down by its heroic passengers.

In July 2011, Vienna fire Chief Richard Brannon and other fire officials traveled to New York City to acquire pieces of the World Trade Center that were brought back to make the 9 / 11 memorial in front of the Vienna fire station.

Brannon said at Wednesday’s 9 / 11 remembrance, attended by more than 50 people, that throughout the day people stopped to see the special display. The display has a wreath placed in front of it by Girl Scout Service Unit 807 members.

“That day will never be forgotten and is the reason this fire department built that memorial. This day is an opportunity for us to come together as a community to remember those who have lost their lives and to pay tribute to all safety forces around the world,” said fire Lt. John Hinely, who was among those to get the artifacts.

Brannon said Vienna, along with Austintown and Bazetta, are the three local communities that have 9 / 11 memorial displays with artifacts from the World Trade Center. He said the community, businesses and residents contributed $6,780 for the Vienna memorial.