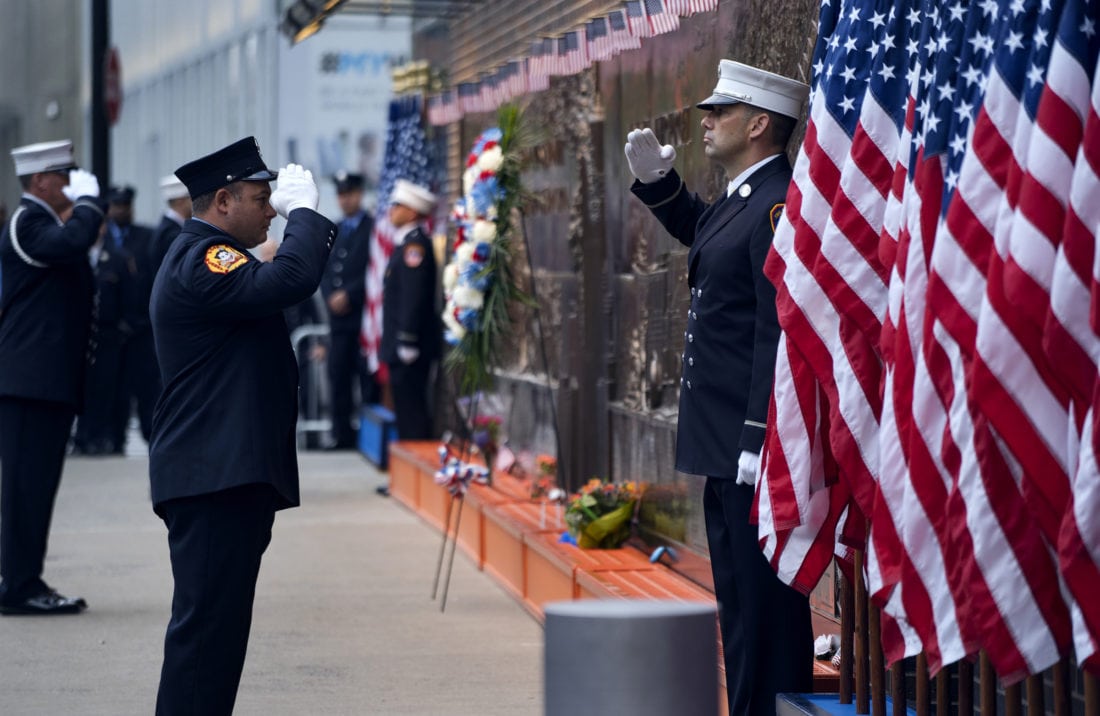 New York City firefighters salute this morning in front of a memorial on the side of a firehouse adjacent to One World Trade Center and the 9/11 Memorial site during ceremonies on the anniversary of 9/11 terrorist attacks in New York. (AP Photo/Craig Ruttle)

NEW YORK (AP) — Vice President Mike Pence has told family members of the 184 people killed at the Pentagon on 9/11 that the nation still grieves with them.

Pence spoke this morning at the Pentagon Memorial. President Donald Trump and first lady Melania Trump are at the 9/11 memorial near Shanksville, Pennsylvania.

President Trump says the nation is recalling “the moment when America fought back.” He said during a somber remembrance at the Flight 93 memorial that the fallen “joined the immortal ranks of American heroes.”

The president is honoring those killed 17 years ago at the site where the fourth airliner crashed after 40 passengers and crew members realized what was happening and tried to storm the cockpit. He says the fallen “took control of their destiny and changed the course of history.”

Trump listened as the names of the victims were read aloud, followed by the tolling of bells.

He recalled the heroism of service members and civilians working in the Pentagon that day. They evacuated and went back into the building again and again to rescue survivors.

He says the terrorists “hoped to break our spirit and they failed.”

The outpouring of emotion on the 9/11 anniversary includes a poignant message from New York’s Finest.

It urges: “Never miss a chance to let those held dearest know your love for them.”

Americans are commemorating 9/11 with somber tributes, volunteer projects and a new monument to victims today, after a year when two attacks demonstrated the enduring threat of terrorism in the nation’s biggest city.

Margie Miller was among the thousands of 9/11 victims’ relatives, survivors, rescuers and others who gathered on a misty Tuesday morning at the memorial plaza where the World Trade Center’s twin towers once stood. She came to the site from her home in suburban Baldwin, as she does 10 or so times a year, to remember her husband, Joel Miller. Only a few fragments of his remains were recovered.

“To me, he is here. This is my holy place,” his widow said before the ceremony began a moment of silence and tolling bells at 8:46 a.m., the time when the trade center was hit by the first of two terrorist-piloted planes. Victims’ relatives who had brought signs bearing photos of their loved ones wordlessly held them high.

A new “Tower of Voices” was dedicated Saturday at the memorial in a field near Shanksville.

Nearly 3,000 people died in the attacks on 9/11, when international terrorism hit home in a way it previously hadn’t for many Americans. Sept. 11 still shapes American policy, politics and everyday experiences in places from airports to office buildings, even if it’s less of a constant presence in the public consciousness after 17 years.

A stark reminder came not long after last year’s anniversary: A truck mowed down people, killing eight, on a bike path within a few blocks of the World Trade Center on Halloween.

In December, a would-be suicide bomber set off a pipe bomb in a subway passageway near Times Square, authorities said. They said suspects in both attacks were inspired by the Islamic State extremist group.

The recent attacks in New York, as well as terror attacks elsewhere, were on Miller’s mind today as she arrived.

Debra Sinodinos, who lost her firefighter cousin Peter Carroll and works near the trade center, said she tries not to let the recent attacks unnerve her.

“You have to move on,” she said as she headed into the anniversary ceremony with her extended family. “Otherwise, you’d live in fear.”

The 9/11 commemorations are by now familiar rituals, centered on reading the names of the dead. But each year at ground zero, victims’ relatives infuse the ceremony with personal messages of remembrance, inspiration and concern.

For Nicholas Haros Jr., that concern is officials who make comparisons to 9/11 or invoke it for political purposes.

“Stop. Stop,” pleaded Haros, who lost his 76-year-old mother, Frances. “Please stop using the bones and ashes of our loved ones as props in your political theater. Their lives, sacrifices and deaths are worth so much more. Let’s not trivialize them.”