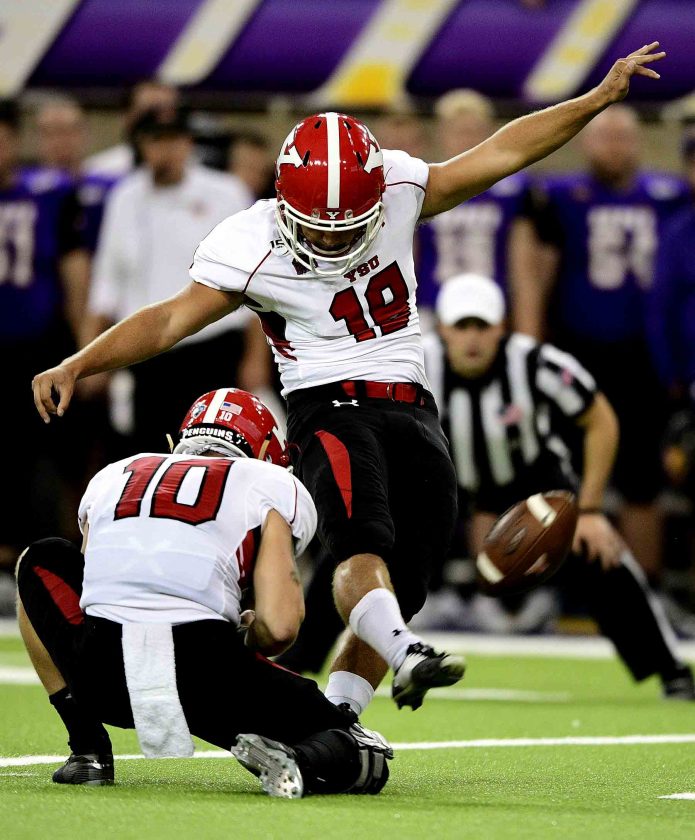 Earning respect hasn’t always been a given for Colt McFadden.

The Poland High School graduate has been a place kicker throughout his football career, and said kickers don’t always garner the same esteem as the rest of the team.

Fortunately for McFadden, he isn’t the average kicker.

He was a team captain at Poland and was named one of the “offseason captains” now as a junior at Youngstown State University. He was given responsibility because he has shown he can handle it, first-year YSU coach Doug Phillips said.

Phillips admits it’s not easy for a specialist to earn such high praise.

“It’s difficult in that position, but Colton overcomes that just by what he does in the weight room or when they’re doing mat drills (non-football-related drills that test players’ limits) or off-season drills,” he said. “Sometimes those aren’t the strengths of specialists, and Colton thrives in those situations. Our kids respect him and have admiration because he does the work they do, and he does it just as hard as they do. He’s strong and he’s tough.”

McFadden’s level of respect is the same as other players in part because his vision for YSU football is the same.

He wants to help turn the program back into a national contender just as badly as anyone. In fact, he may have more of a reason than most. His father, Paul, was a standout kicker at YSU during the early 1980s and was selected to multiple Pro Bowls during a six-year NFL career.

Colt has learned a great deal from his father, who still holds the YSU record with five field goals of 50-plus yards, and said the two kick together on Sundays.

“We started that a few years ago,” Colt said. “It’s great to have the opportunity to go out with him on a weekly basis and pick his brain and learn things from him. He’s always been someone to stand back, watch from a distance. He doesn’t ever want to say too much to me, but he’s giving me so much advice. I would not be where I am today without his guidance and everything he taught me.”

With the extra down time, McFadden said he was able to “fire up some of his (dad’s) old tape” and took some things from Paul’s form that he would like to incorporate into his own style.

Being the son of a former NFL kicker hasn’t always been such a blessing. Colt put a lot of pressure on himself to live up to the family name back in high school. He has since learned to channel that burden into his work ethic.

“It can be, when I was younger, something that was on my mind a lot,” he said. “Mistakes were just a little bit higher. Now, where I’m at, I love it because it pushes me that much harder. It’s trying to keep that family name up and represent my name the right way. You do that by performing with excellence, just giving my absolute 100-percent effort.”

His father isn’t the only former NFL kicker to help mold Colt, who started his college career at Kent State University before transferring to YSU last year.

Former YSU and NFL standout Jeff Wilkins will often come to the Penguins’ games. Wilkins, who still holds the YSU record for career field goals (66), also has influenced Colt throughout his career.

“Jeff, being a former Penguin, he’s been an awesome guy whenever I have the opportunity to learn from him,” Colt said. “That’s 14 years of NFL experience. That’s something you don’t come by very often. He’s an unbelievable person and obviously was incredibly talented. He’s a great dude.

“He comes to a lot of the games. I’ve learned a lot of things from him over the years. He’s been a key person in my development as an athlete and as a kicker.”

Now, Colt is trying to make his own name.

He was a solid 6-for-8 on field goal attempts last year. He had a long of 43 yards. He also made 43-of-46 extra points. Both of those tasks become trickier at home games, with the swirling winds at Stambaugh Stadium giving any kicker fits.

McFadden doesn’t use it as an excuse. He understands that if he’s going to call others out about their mistakes, he must hold himself to the same standard.

“I get a lot of feedback from my teammates and coaches,” he said. “(Strength and conditioning) coach (Terry) Grossetti, we’ve had weekly meetings with him. He wasn’t afraid, if one of us weren’t up to the standard, he would let us know. There were times he told me I needed to improve the things I was doing. It’s just being able to accept that criticism and not look at it as a bad thing, use that as an opportunity to grow as a player and as an athlete.

“That’s kind of the way it works. It’s not like just because you’re a captain you don’t get critiqued as well. I encourage guys in my group, if I wasn’t doing my end of the deal, to call me out. It’s a two-way deal.”

And it’s how McFadden earns respect.