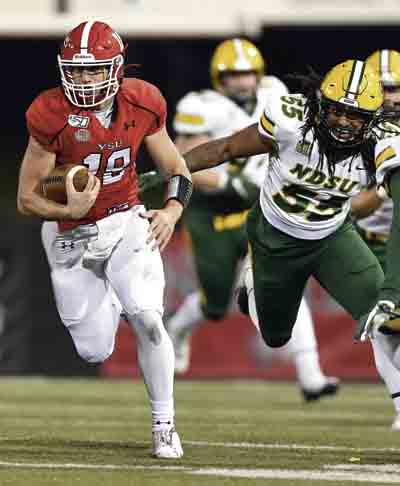 The Youngstown State football team may have officially hit rock bottom in a topsy-turvy season that has been in a downward spiral for weeks.

The Penguins were whipped, 56-21, by a sub-par South Dakota team last week. It was the second-straight game YSU (4-5, 1-5 Missouri Valley Conference) allowed 56 points.

As the Penguins play for pride, fans are calling for the ousting of fifth-year coach Bo Pelini, whose tenure started off well but has faded fast. That talk won’t help as YSU attempts to salvage some part of its season.

They’ll again be facing a struggling team as Indiana State (3-7, 1-5) has lost four straight and five of its last six. Unlike YSU, they’re at least keeping it close, dropping a 17-9 contest to No. 5 Northern Iowa last week, a game in which ISU outgained the Panthers, 345-258.

YSU’s defense will have to play better as it is struggling on all levels right now. Maybe facing the league’s second-worst offense will help the Penguins pick up a victory?

YSU — Joe Craycraft played OK in his first full start. His numbers were solid, going 18-of-30 for 246 yards, three touchdowns and zero interceptions, but he was sacked six times. With YSU forced to throw more because of an early deficit, South Dakota rushed the passer at will. It was a tough situation to be in as the Penguins trailed 14-0 just 7 minutes into the game. The young, strong-armed QB needs more help from the players around him to be successful.

ISU — The loss of preseason first-team All-MVFC pick Ryan Boyle in Week 4 was devastating. Boyle was a star and the leader of a young team, and the Sycamores never recovered. Replacement Kurt Wilderman has been up and down. Last week, he was 15-of-25 for 220 yards, but he threw two interceptions in a close loss to UNI. That’s how much of his time under center has gone. The Sycamores also use a “Wildcat” QB in Michael Haupert. He has thrown just one pass (an interception) and rushed for 194 yards and zero TDs.

YSU — Senior Joe Alessi tried to play against the Coyotes after suffering an undisclosed injury the week before against North Dakota State. He apparently re-aggravated it because he left the game in the first half and didn’t return. The ground game suffered, gaining just 66 net yards (minus 32 on sacks). Granted, running the ball was hard to do after the first quarter because of a 21-7 deficit. With YSU’s offense predicated on running the football, that’s a problem. It needs to change.

ISU — Junior running back Peterson Kerlegrand is having a nice first year as a starter. His 661 yards are sixth best in the MVFC. He also has 18 catches for 149 yards receiving. He shares time with Dominique Dafney, who had a team-high 81 yards on 16 carries last week. Dafney, who also lines up at wide receiver, has two TDs and 134 yards rushing.

YSU — Several players got involved last week, with YSU throwing the ball so much, but it’s obvious the Penguins aren’t a team that prefers to spread the field and throw the ball 30 times. Jermiah Braswell continues to be a big-play threat as he caught TDs of 53 and 9 yards last week. He leads YSU in catches (24), yards (515) and TDs (7). When healthy, tight end Miles Joiner is a big target who’s especially dangerous in the red zone.

ISU — Dante Hendrix (6-3, 195) is having a breakout sophomore year. He leads ISU with 44 receptions for 526 yards and two TDs. YSU has struggled to cover all types of receivers, but taller ones have been especially problematic. Dakota Caton (5-10, 175) and Dante Jones II (6-2, 215) each have 19 receptions, second best on Sycamores.

YSU — The offensive line was probably in the toughest position following the large deficit. The Coyotes were able to send a multitude of blitzes, and the defensive line could rush the passer most of the game. The line has been inconsistent much of the season but had played well the last few games leading up to South Dakota. They need to be better to help the offense get straightened out.

ISU — The line is led by all-conference center Wyatt Wozniak, a 6-3, 300-pound senior. By the numbers, the Sycamores have been average up front, allowing 25 sacks and paving the way for 1,581 yards and eight TDs (seventh in the MVFC). In the line’s defense, they’ve blocked for five different QBs.

YSU — The line seems to be trending in the wrong direction after playing very well most of the year. South Dakota had its way with the Penguins both passing and running. With players like Justus Reed, DeMarko Craig and Mal’ik Richmond, more is expected. Reed leads YSU and is second in the conference with 9.5 sacks. Richmond is fifth with seven.

YSU — When a team has two running backs each rush for more than 100 yards, the linebackers have to take some heat. The ‘backers had been playing fairly well, but the wheels came off against USD. The Penguins have struggled to make offenses one dimensional, and if that continues, the defense is going to be in trouble. Leading the LBs is Ray Anderson, who is third on the team with 46 tackles.

ISU — Middle linebacker Jonas Griffith (6-4, 250) is one of the top linebackers in the league. He leads the Sycamores with 89 tackles to go along with four sacks, seven TFLs and one interception. Outside linebacker Clayton Glasco is having a huge senior campaign, with 66 tackles in just seven games and a team-high 13.5 TFLs. Still, ISU is allowing 179.3 rushing yards per game, third worst in the MVFC.

YSU — It’s hard to imagine things getting any worse for this group. Teams have picked apart the secondary all season, and USD did the same, throwing for four TDs and zero picks. The Penguins had seven interceptions through four games but have one since. The corners and safeties can’t get on the same page, and both are getting burned on a regular basis. It’s a mess.

ISU — Indiana State is giving up the least amount of passing yards per game in the league (150.7). Part of that is because teams have run the ball well against one of the league’s worst rush defenses. Corner Keawvis Cummings has a team-best 10 passes defended and two interceptions. Safety Michael Thomas, a converted receiver, is third on ISU with 56 tackles.

YSU — Ryan Teminsky continued to handle the punting duties after taking over for Nick DeSalvo in Week 10. He has done OK, averaging 36.1 yards per kick, slightly better than DeSalvo’s league-worst mark of 35.2. Colten McFadden has been consistent on field goals (5-of-6) and kickoffs. Jacob Coates is one of the league’s top returners, but teams haven’t punted much lately.

ISU — Place kicker Jerry Nunez, a first-team All-MVFC kicker, is 12-for-16 on field goals with a long of 42. Punter Travis Reiner is averaging 37.3 yards per boot, one of the worst marks in the league.

A season that started with so much promise has fallen apart for YSU. The Penguins have been embarrassed two straight weeks and haven’t played well on either side of the ball.

Their best chance at winning one of their final two games is Saturday. The Sycamores have struggled in the conference (and against YSU) for years, but the Penguins have been a mess the last few weeks.

If they’re going to turn things around, it starts with the defense figuring things out. The miscommunications and malfunctions have been the only consistent part of the secondary. Maybe that improves against one of the league’s worst passing offenses. The offense needs to run the ball to set up the play-action pass. It’s possible, and it has happened before.