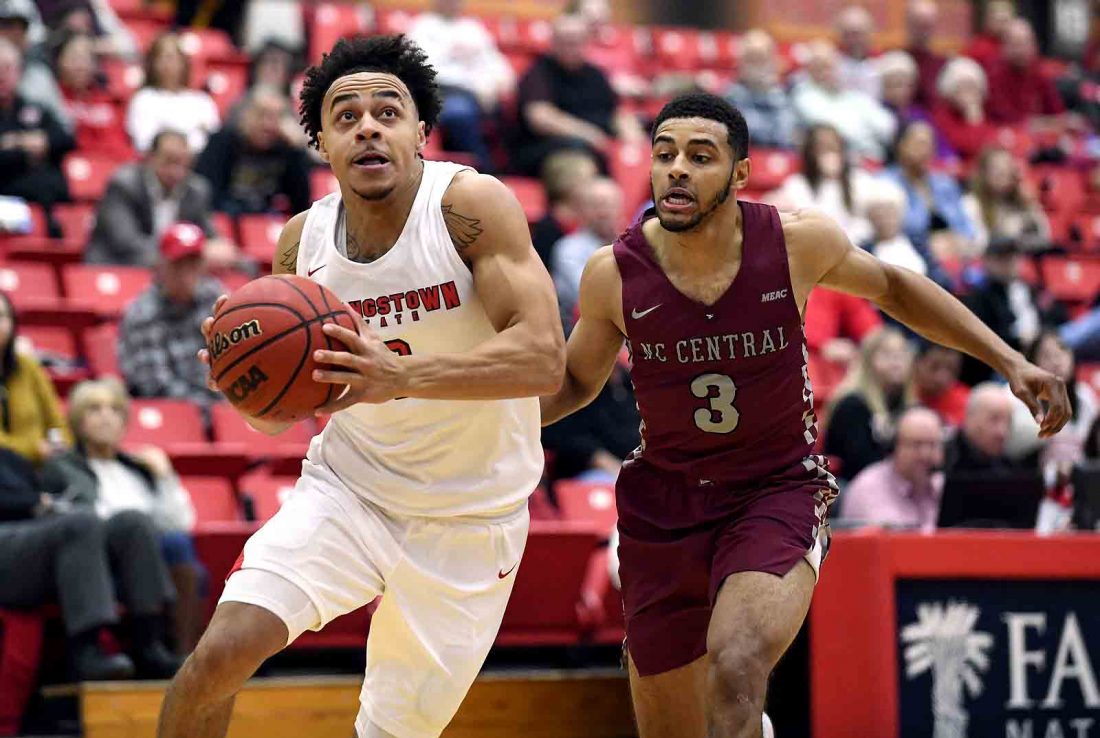 Correspondent file photo / Robert Hayes Youngstown State sophomore guard Darius Quisenberry, left, drives to the basket during a recent game. Quisenberry is one of the Horizon League’s top scorers as he takes his game to another level in his second season with the Penguins.

YOUNGSTOWN — Darius Quisenberry saw the defense surrounding him. Not much the opposition could do as the Youngstown State University sophomore started dribbling, weaving by defenders.

He passed the 3-point arc and entered the lane. Is there a sliver of room for his 6-foot-1 compact frame to wiggle through defenders?

“I drive and the other teams suck in, that creates a lot more open shots for the other teammates and kick outs more as well,” said Quisenberry, who entered Wednesday’s game with Westminster averaging 16.8 points a game — top three in the Horizon League.

He ranks high in the league in free-throw percentage, assists, steals and field-goal percentage — the Penguins’ only double-figure scorer.

He leads the team at the foul line with 36 attempts. The 26-of-36 mark from the charity stripe is nowhere near where Quisenberry, a Springfield, Ohio, native, wants to see from himself.

He was 15 of 20 from the line in Saturday’s win against USC-Upstate, a school record on attempts and makes.

Still, not good enough for the YSU sophomore point guard.

“If I don’t miss two front ends of a one-and-one, I shoot 22 free throws instead of 20,” Quisenberry said.

Last week, YSU was out of the practice routine with three games in five days. This week, with Wednesday’s home game and a road game not until Saturday at Central Michigan, the Penguins have time to hone their games.

Quisenberry said it’ll take confidence and working in the gym to get out of this offensive funk.

Getting better offensive starts with aggressiveness toward the hoop is something YSU coach Jerrod Calhoun prefers seeing from his team.

He saw it with Akron guard Loren Cristian Jackson and Tyler Cheese.

“Those guys open up a lot for their teammates,” Calhoun said. “I think that’s a big piece of the puzzle, when guys can get where they want to go, pick their spots, come out of a pick and roll, play in transition and have that ability to not only finish for yourself, but to get others involved. That makes you a really dynamic player. I think that’s something we’ve really been drilling with our guys.”

Quisenberry drives through the lane and usually finishes out of bounds on his back, giving every ounce of effort the YSU point guard can muster.

“Just that pit-bull, bulldog mentality,” he said. “I have a very quick first step. I think that is to my advantage. I think our post does a tremendous job setting me screens so I can get downhill. I think getting in that lane and creating is what I do best.”