Changes on the horizon for Penguins? 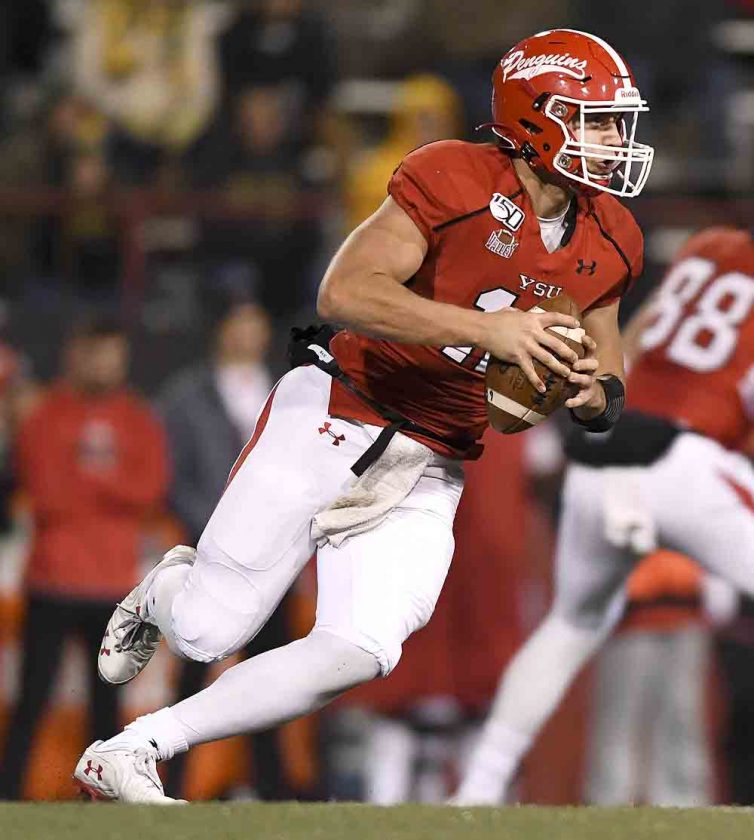 YOUNGSTOWN — Under fire by fans and mystified by his team’s mistakes, Youngstown State’s Bo Pelini didn’t sound like a coach ready to step away.

He sounded like one ready to step into a new way of doing things.

Coming off a third-straight loss that dropped the Penguins to 1-6 in the Missouri Valley Football Conference and 5-6 overall (after a 4-0 start), Pelini admitted changes need to be made. Some of those changes, he said, must be in his own coaching style.

“You’ve got to adapt with the times a little bit and the nature of who you’re coaching,” said Pelini, who is 32-28 at YSU and could endure his third losing season in five years. “There are some things that I already have in mind as far as what needs to happen going forward and some changes that need to be made. There are a number of things. I’m not going to get into all of that today. What I’m focused on right now is Illinois State and what we’ve got to do to prepare for this game, but believe me, I’ve thought about some things that need to be adopted into the winter and spring ball and beyond that to get ready for next year.

“I think there are a lot of pieces in place,” he added. “I don’t think this team’s far off to where we can compete with anybody in this league.”

Some of the changes have already begun.

Several younger players got their first taste of extended playing time in last week’s 24-17 loss to Indiana State, and the youthful trend will continue in Saturday’s noon matchup with sixth-ranked Illinois State. The biggest change could be under center. Pelini said true freshman quarterback Mark Waid will see more playing time after not participating in the last two games.

Waid, a highly touted recruit out of Girard High School, will still be considered a redshirt freshman next season because this will be the fourth game he has played in (the maximum allowed by the NCAA before a player relinquishes his redshirt). Waid sparked two second-half scoring drives against North Dakota State on Nov. 2, the last time he played. Sophomore Joe Craycraft took every snap in the last two games.

Pelini said the Penguins were careful with how they used Waid because they wanted to get him experience but not burn his redshirt.

“We were pretty much settled on the fact that if Joe (Craycraft) had gone down in the last two games, we were just going to go ‘Wildcat’ and live with what had to happen to stay with the plan of Mark not playing,” Pelini said. “Fortunately, Joe stayed healthy, and he got some experience. Now Mark is available, so we’re going to make sure he gets some experience in this game.”

Waid certainly won’t be the only freshman on the field.

The infusion of youth is a tough call for Pelini, who also must think about honoring the seniors on Senior Day against Illinois State (8-3, 5-2), one of the top teams in the FCS.

“There’s a lot that goes into it,” said Pelini of the decision. “You want to play well and win the football game, but at the same time, you want to take advantage of the opportunity to get some guys some playing time.

It’s been a hard season for the Penguins.

They were ranked as high as 17th in the FCS after a 4-0 start in which they won each game by at least 20 points. A three-game losing streak to start conference play started the downfall. Things looked to be back on track after a 59-14 victory over Western Illinois, but routs by North Dakota State (56-17) and South Dakota (56-21) put the playoffs out of reach. Last week’s loss to a 3-7 Indiana State team began questions about Pelini’s future.

Pelini, who signed a three-year contract extension in March, understands the criticism.

“That comes with the territory,” he said. “People want to criticize me, criticize what’s going on with the program or criticize me personally, that’s their prerogative. It’s not going to change how I approach my job. … At the end of the day, as a coach you have to be able to look at yourself in the mirror and make sure you’re doing everything you possibly can for the program. At the same time, you have to understand that as you go, you have to keep getting better. You’ve got to adapt with the times, and you’ve got to make changes when they’re necessary.”