YSU puts it all together in rout of Western Illinois 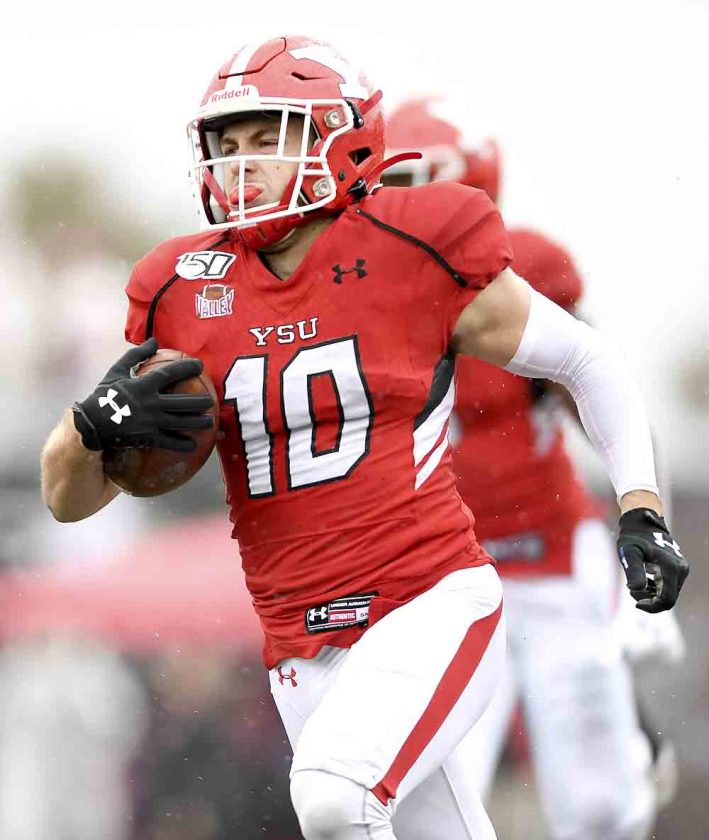 YOUNGSTOWN — Players admit that it is hard to know what is coming from the Youngstown State football team on a weekly basis.

YSU coach Bo Pelini is adamant that when the Penguins “stay out of our own way,” they’re really good.

They weren’t in the way Saturday. At times, it didn’t seem like the Western Illinois Leathernecks were either.

YSU dominated from start to finish, crushing Western Illinois, 59-14, in a steady rain to snap a three-game losing streak and earn its first win in the Missouri Valley Conference.

“I thought it was important to get our mojo back a little bit,” Pelini said. “I don’t think this team lacks confidence or anything like that. I just keep saying, when we stay out of our own way, we can be pretty good. We didn’t make a lot of grave, big mental errors. Our execution was pretty good. We took a step forward because we took a big step back (in last week’s 35-10 loss to Southern Illinois). We took a step forward this week, and we’ve just got to keep that going.”

The Penguins (5-3, 1-3 MVFC) welcome top-ranked and undefeated North Dakota State to Stambaugh Stadium at 6 p.m. next Saturday. With three losses already in the conference, a signature win against the nation’s top team would do wonders for YSU’s playoff push.

“They’re always a good football team, and we always play them really well,” YSU linebacker Christian Randall-Posey said of NDSU. “I just hope that we keep this momentum rolling. I’m more worried about us going out there and doing what we’ve got to do, take care of what we have to take care of than what they’re going to do.”

A repeat performance of Saturday would certainly give them a chance.

A balanced YSU offense overmatched the Leathernecks (0-8, 0-4) from the start. The Penguins scored on the third play from scrimmage, with running back Joe Alessi cutting to the outside and outrunning defenders for a 44-yard TD.

WIU responded with a tying touchdown, but Alessi struck again, this time bursting through the middle for a 56-yard TD. The senior from South Range High School finished with 156 rushing yards and two TDs on 13 carries.

He was one of several players to shine.

The offense was the story.

Quarterback Nathan Mays was 10-of-17 passing for 182 yards and a career-high four touchdowns. With the run game rolling, the play-action pass opened up, and Mays hit Jermiah Braswell on a 40-yard TD pass deep down the middle for a 21-7 lead.

Backup QB Joe Craycraft came in on the next series, and he, too, fired a TD pass to Braswell, completing a similar throw deep in the middle of the field. This one went for 54 yards. Christian Turner later caught a 1-yard pass on fourth down for a TD, and the half was capped with Mays launching a Hail Mary that was caught by Kendric Mallory as time expired for a 39-yard TD and a 35-7 halftime lead.

Mays, one of the team leaders, was happy to see the team come together after three straight defeats, including an embarrassing loss last week.

“To come out there and really dominate in every phase of the game going into next week, the biggest game of the season, it was nice to see,” he said. “… Just the amount of mental errors that we decreased from last week to this week was what I was happy to see.

“Most of the guys, week to week, were playing so tight,” he added, “and they finally came out, and It was visibly evident that they played loose this afternoon. It just proves how our guys can be at their best.”

The defense allowed just 260 total yards, much of which came late in the game, with the outcome already decided. YSU finished with 524 yards of total offense. They forced three fumbles and recovered all three and played well on special teams as well.

While those are all good signs as they prepare to face the defending national champions, Pelini believes in a week-to-week approach, not keeping the momentum going.

“I don’t buy into all that (crap),” said Pelini, who earned his 99th career victory. “This was the next game. I thought we played well. We’ll enjoy tonight and get ready for North Dakota State this week.”