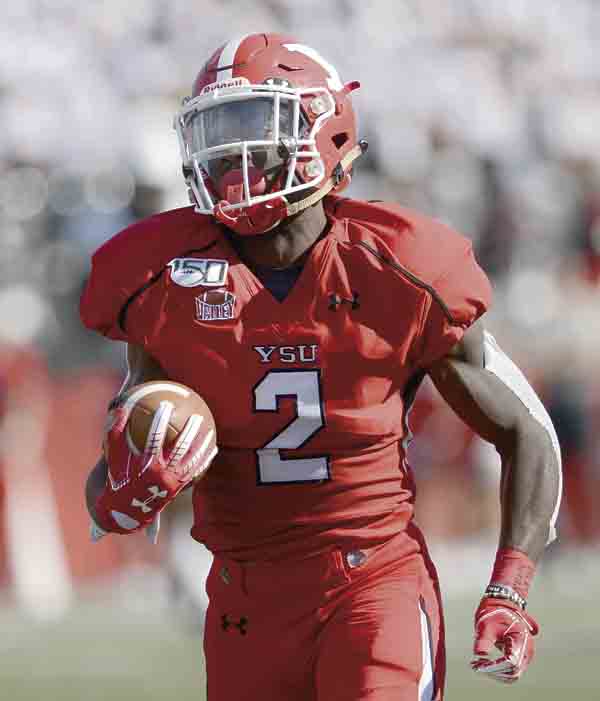 Staff photo / R. Michael Semple Youngstown State defensive back Dee Ford returns an interception in last week’s victory over Howard. The defense had its ups and downs and needs to make improvements against Duquesne on Saturday.

YOUNGSTOWN — The first two tests of the season were quite different for the Youngstown State Penguins.

The third brings another new challenge.

YSU hosts Duquesne, a returning playoff team, in an interesting matchup that may not favor the Penguins as much as it has in the past (YSU beat the Dukes, 45-10, in 2016 and is 3-0 all time versus them).

It’s hard to get a gauge on Duquesne, which has played just one game, a 44-3 victory over Division II Walsh last week. They beat Towson in the opening round of the 2018 playoffs before being trounced by South Dakota State, 51-6.

The Dukes had several standout players return and will be another viable opponent for the Penguins, who are coming off a mostly dominant win over Howard, which also boasted a few stars.

YSU (2-0) leads the FCS in rushing yardage and is second in touchdowns, but it could be facing its toughest test yet after wins over Samford and the Bison. That’s not necessarily a bad thing as the Penguins prepare for the rigors of conference play.

YSU — It might be a stretch to say Nathan Mays is entrenched as the starter. He has been solid but far from spectacular, and backup Joe Craycraft, who he narrowly beat out for the job, played at key moments in both games. Still, Mays’ poise and leadership are vital attributes to this young team. He is 18-of-32 passing for 306 yards, four TDs and one interception on a tipped pass. He’s a hard runner, too, with 120 yards and one TD.

DU — Senior Daniel Parr (6-foot-3, 210 pounds) was one of the more efficient QBs in the FCS last year, completing 188-of-311 passes (60 percent) for 2,447 yards, 20 TDs and 11 interceptions. The Preseason All-Northeast Conference selection has decent mobility (7 rushing TDs last year), but his accuracy and decision-making are his main strengths.

YSU — YSU’s powerhouse backfield continued its ways against Howard as six players churned out 454 rushing yards and five TDs. A true running back by committee is averaging 7.3 yards per carry. Braxton Chapman leads with 182 yards, and starter Christian Turner is next with 171. It’s a great mix as players can run with power or break off long chunks. Nothing will change against the Dukes.

DU — The Dukes boast one of the most elite running backs in the FCS in senior A.J. Hines (5-11, 225). The All-American ranked third in the FCS with 1,520 rushing yards last year, including seven 100-yard games. A Walter Payton Award finalist last year, his mix of speed and power, along with decent hands out of the backfield, make him a complete back. He will undoubtedly be the central focus of the YSU defense.

YSU — Jermiah Braswell continued to emerge as one of Mays’ top targets. His fully extended 38-yard touchdown reception was so impressive it was one of SportsCenter’s To 10 plays. More importantly, he and junior Samuel St. Surin have shown the ability to be legitimate threats. No. 3 wide receiver Ryan Emans caught his first career TD pass last week as well. All three have one TD catch, and Braswell and St. Surin are averaging more than 20 yards per reception.

DU — Duquesne lost the school’s all-time leading receiver in Nehari Crawford, but its No. 2 and No. 3 flankers, Kellon Taylor and Kareem Coles Jr., return. Taylor caught six passes for 60 yards in the opener. He was one of seven players to catch a pass. Three different players caught TDs, so the Dukes could force YSU to cover the whole field.

YSU — The line has been the strongest unit of the offense to this point, which is great news considering the physicality that is needed up front in the Missouri Valley Football Conference. Even with four new starters stepping in, the line has been brilliant — allowing just one sack while clearing the way for the nation’s best rushing attack. Their importance cannot be downplayed as YSU is fully committed to a run-heavy offense from here on out.

DU — This is where DU may have some growing pains. The Dukes graduated four starters — including two all-league picks. They do have some experience back in Gabe Spurlock (6-4, 295), a preseason All-NEC pick, and Lyle Petrosky (6-4, 300), who started six games last year. If YSU can win the battle up front and slow Hines, Duquesne’s offense could be in trouble.

YSU — The d-line showed some flaws for the first time in a while. The strength of the ‘D,’ the line struggled to contain agile QB Caylin Newton last week. They have a different challenge this week with Parr. While he is mobile, he’s more of a pocket passer, which plays into the line’s best attribute of rushing the quarterback. End Justus Reed already has five sacks, and remarkably, tackle DeMarko Craig is tied for the team lead in tackles with 12.

YSU — After a few weeks in which the linebackers weren’t as involved because of pass-first offenses, the LBs should be get more playing time against Hines and the Dukes. Led by senior Cash Mitchell, the ‘backers need to be on their game against one of the nation’s best running backs. It will also serve as a bit of a preview of what the Penguins will see in the MVFC.

DU — Linebacker Brett Zanotto is the leader of the Dukes’ defense. A Maryland transfer, the 6-1, 215-pound Zanotto led DU with 89 tackles and six TFLs last year. Fellow senior Brendan Thompson saw limited time as a junior but is the starting middle LB this year. He led DU with eight tackles, two for losses, last week. Junior Tom Jurkovec is another reliable player, with 32 stops in four starts last year.

YSU — The secondary has been opportunistic with four interceptions in two games, but they have struggled as well. Surprisingly, top corner Bryce Gibson was beaten badly on a couple different occasions against Howard. He struggled against a bigger, stronger receiver and was replaced. He’ll likely be back out there with surprise true freshman Dee Ford on Saturday. Safety Kyle Hegedus is tied for the team lead with 12 tackles.

DU — Punter and place kicker Mitch MacZura is another all-league pick. He averaged 39 yards per punt and was 9-of-10 on field goals, with a long of 39. The Dukes are breaking in new punt and kick returners.

Once an afterthought on the schedule, Duquesne is now a powerful FCS program. They’ve won three of the last four NEC titles, and while the conference isn’t one of the strongest in the FCS, the Dukes proved they can compete with elite teams in their 31-10 first-round victory over Towson last year.

One of the big keys for YSU is slowing the run game and forcing Duquesne to become one dimensional. That won’t be easy with Hines in the backfield, but YSU’s defense is due for a big game, and they’ve played fairly well against the run to this point. DU is a capable of making big plays through the air, so the secondary needs to play better.

The hope is the Penguins begin to play cleaner, allowing fewer big plays on defense and showing a bit more efficiency passing the ball on offense.