At home in the Valley 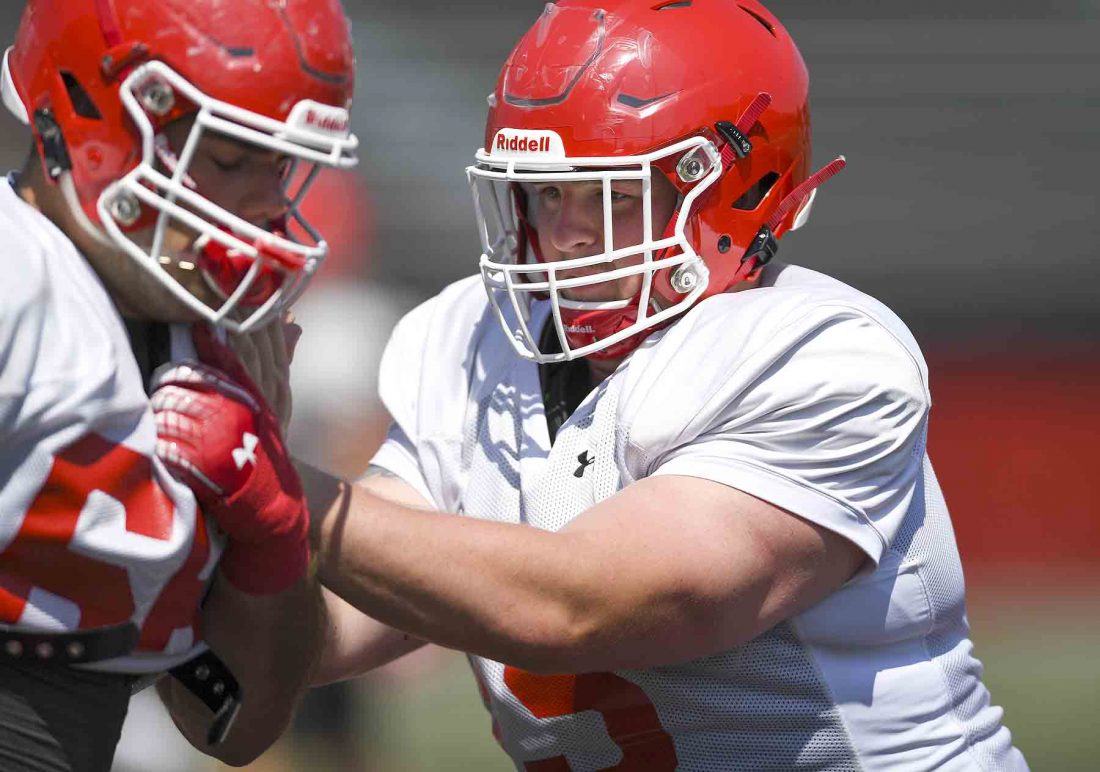 Tribune Chronicle / Robert Hayes Hubbard graduate Matt Jones, right, practices this week at Youngstown State. After four years at West Virginia where he was a two-year starter, Jones is playing for the Penguins as a senior graduate transfer.

YOUNGSTOWN — There is a lot to learn for Matt Jones.

The former Hubbard High School standout transfered from West Virginia University to Youngstown State in January, and a week into preseason camp, he realized his biggest challenge.

“I’m still learning everyone’s name, so it’s a work in progress,” he said with a laugh. “It’s harder than you think. I’d like to know everyone’s name. I’m working on it. We’re all working together.”

The rest of his transition has been rather smooth.

Jones was a two-year starter with the Mountaineers, but he said he wanted to spend his final year of football in his hometown. The Mahoning Valley means a lot to him. The 22-year-old recently got married to his high school sweetheart, and the two now have a home in Hubbard.

The 6-foot-3, 325-pound senior graduate transfer also enjoys the food — a lot — something he made clear when he announced his transfer, saying, “I can’t wait to be able to perform in front of friends and family, play for my hometown, and eat lots of Youngstown pizza.”

The football part of it is working out well, too.

He said learning the playbook wasn’t all that difficult, in part because YSU uses a lot of the same terminology as West Virginia. The team has welcomed him with open arms as well, and he certainly knows his way around town.

It’s exactly what Jones envisioned when he decided to return.

“I’m just happy to be back, playing my last year at home, putting people in the stands,” he said. “Hopefully we can come out and win games. That’s the main goal is to win games and have fun. It’s a blast being here.”

“It’s so much different,” he added. “I’m going home now (after practice), like home home, not just my apartment. It’s different, and it’s a good different.”

The Penguins are hoping he provides a difference for them.

YSU is coming off a disappointing 4-7 season in which they lost the season opener to lowly Butler. A turnaround will start up front, and Jones brings experience and talent to a young offensive line.

Jones likes the way things are coming together so far.

“That’s a big part of camp is creating a chemistry and coming together,” he said. “If you think about it, we’re with each other everyday all day from 6 in the morning till 8 at night. We’re in a tight little meeting room, so I think we’re all becoming pretty good friends.”

YSU coach Bo Pelini seems to be one of those friends.

He spoke highly of Jones and what he brings to the team. Pelini understands it can be difficult for a player who just joined the team to be vocal and lead, but Jones brought a strong presence with him from WVU.

“Obviously experience. Physicality and attitude,” said Pelini of what attributes Jones possesses. “He’s a very smart football player. He’s the total package. He’s a really good player, and the intangibles he brings to the table are important. He’s a leader. All the guys respect him. He’s played in a lot of big football games, so that’ll help.”

The Penguins will hold their first intrasquad scrimmage of the preseason at 10 a.m. today. One of the main areas for fans to watch might be behind Jones as a quarterback battle continues to play out.

Senior Nathan Mays and sophomore Joe Craycraft are the favorites, with true freshman Mark Waid also part of the mix.

If someone is leading the race, Pelini isn’t giving away any hints, and he doesn’t expect to name a starter anytime soon.

“Probably August 24, you’ll find out that day,” said Pelini of when he’ll name the starter, which not so coincidentally is the same day YSU opens the season. “It’s hard to say. There’s good competition, and that really goes with every position. The guys that earn it through camp, and the guys we feel can play winning football for us are the guys that are going to be out there come August 24 when the lights come on. I don’t put a time frame on any of that. We’ll know when we know.”

The Penguins open the season at 3 p.m. at a neutral site against Samford in the “Week Zero FCS Kickoff” in Birmingham, Alabama at the Cramton Bowl. The game will be televised on ESPN.