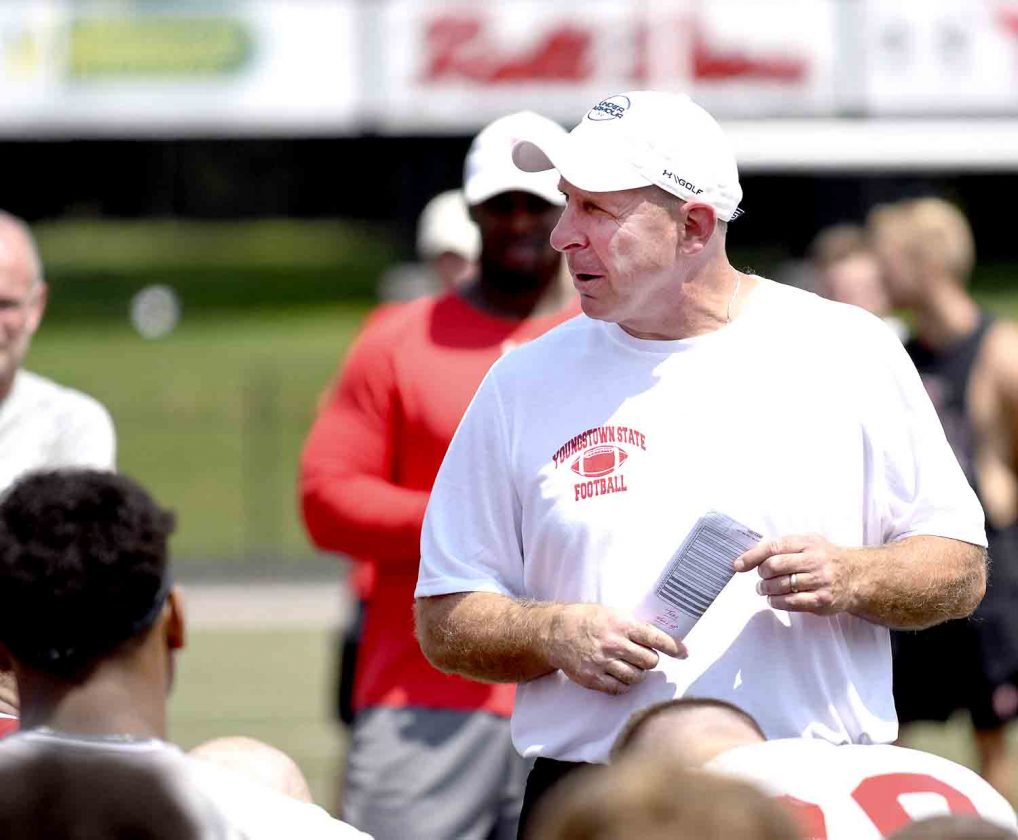 YOUNGSTOWN — It may only be July, but football is back in the air at Stambaugh Stadium.

The Youngstown State Penguins play the Samford Bulldogs in college football’s “Week Zero” on Aug. 24, which prompted YSU to begin fall practice on Saturday, a bit earlier than normal.

“I don’t think I’ve ever started in July in my coaching career, since I’ve left the NFL,” coach Bo Pelini said. “But we play on the 24th, so we’re back here a little bit early. You’d better have a sense of urgency, we’re going to go down there and play a good football team in the first game.

“But we’re not concerned with that right now. We’re concerned with our football team, and our progress and taking it day to day and earning our right to play good on the 24th of August,” Pelini said.

Pelini seemed pleased with his team after practice. 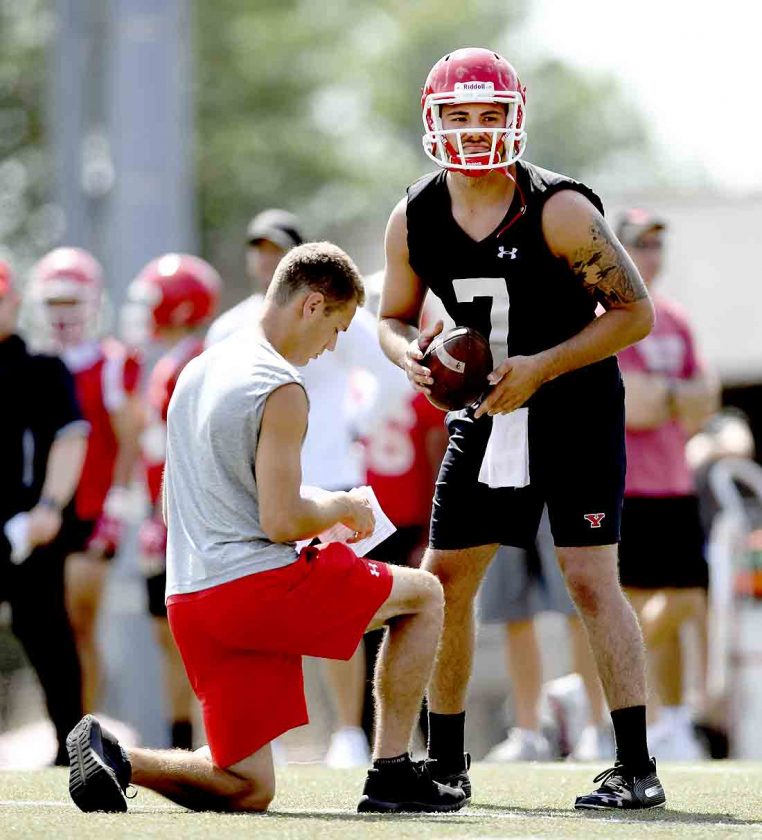 Tribune Chronicle / Robert Hayes YSU quarterback Nate Mays gets set to run a play during the Penguins' first practice of the season Saturday at Stambaugh Stadium.

“I thought it was a good first day. Along with the vets, we have a lot of new faces out there, guys that are obviously swimming it a little bit mentally, but I thought that guys came out here and competed,” he said. “I thought we had a really good summer leading up to this, and the message is, we have the opportunity to be a really good football team, but we’ve got a lot of work ahead of us.”

Veteran quarterbacks Nate Mays and Joe Craycraft took a lot of first team reps during Saturday’s practice, and Pelini is unsure how those two will split reps during camp.

“We’ll see how they compete, and we’ve got a good group of quarterbacks,” he said. “Obviously, Mark Waid (Girard) is also in that mix getting reps, he’s a young guy who’s trying to figure it out also. The other two guys have been around a little bit, I think they’re healthy, ready to go. All three of them had a good first day, there’s a lot of learning and a lot of competition that needs to happen over the next couple weeks.”

Mays is coming off of an injury which limited his time last season, and sidelined him for much of the spring practices. As a fifth-year senior, he’s excited to see some of the younger players on the team taking reps.

“A lot of young guys that have made camp, we’re getting them as many reps early as we can to see who can make some plays and maybe go on the field,” Mays said. “But a lot of the guys that we have that are veterans haven’t played as much either. We’ve had a lot of guys that, despite this being their fifth year, they haven’t necessarily been on the field much. But they’re all veteran guys and big leaders that can step up and help those guys.” 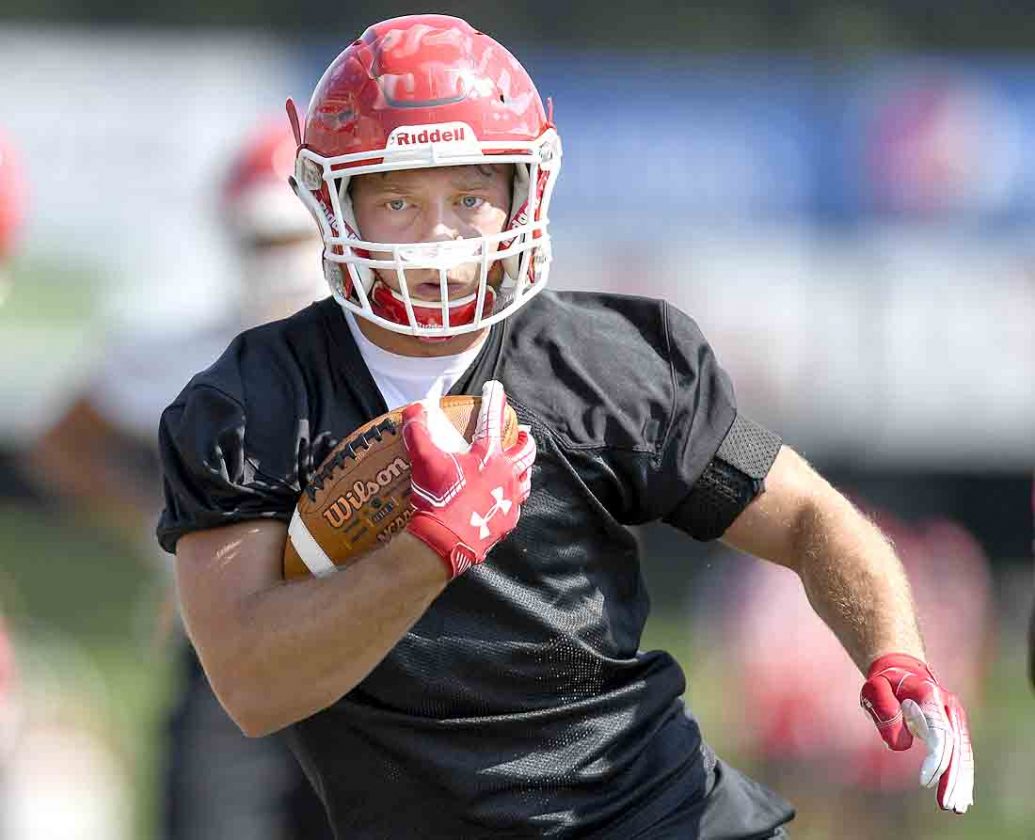 Senior Joe Alessi (South Range) was happy to get back to work.

“It feels awesome to be back on the field, I love it,” he said. “Everyone is hyped up day one, people are hitting, there’s no pads on, so it’s always a good time.

“He’s (Pelini) getting across that everyone needs to work on the mental side of the ball,” Alessi said. “You can do the physical side of the ball all you want, at the beginning of camp, but the biggest thing is young guys needing to learn how to play faster in college. You need to learn how to play quicker mentally, not just physically, but mentally.”

Redshirt junior Wes Thompson said he thinks that it is important to start off on a good note.

“It always starts with day one, being here for my fourth year now, the older guys know what to expect. We have a bunch of freshman coming in too, we just have to bring them along with us and make sure they understand what the culture is around here.”

Carl Pelini returns to Youngstown State after spending a season at Bowling Green. During his tenure with YSU from 2015-17 he was the Penguins’ defensive coordinator, but he has a new role this time around as associate head coach, where he’ll be overlooking both sides of the ball.

“New challenges for me, it’s something that is kind of like the responsibilities I took on at BG when I was the interim head coach there, so we just carried that over to this program,” he said.

“Our tight end play, our receiver play, we got three really talented quarterbacks, really four guys who could play the position, but most importantly the biggest improvement I’m seeing is physicality and athleticism on the offensive line. I think that’s going to surprise a lot of people, and it’s going to be something that we want to hang our hat on, we want to be a more physical team then we were a year ago.”

Bo Pelini is happy to have his younger brother back on the staff.

“It’s big for me, obviously he brings a lot of experience, and we got a couple of new faces on the coaching staff, but all guys that I’m very familiar with. I don’t think we’ll miss a beat as far as that’s concerned, but having Carl back is big for our program and it’s big for me personally.”

The Penguins have an off day today, and resume practice Monday morning.