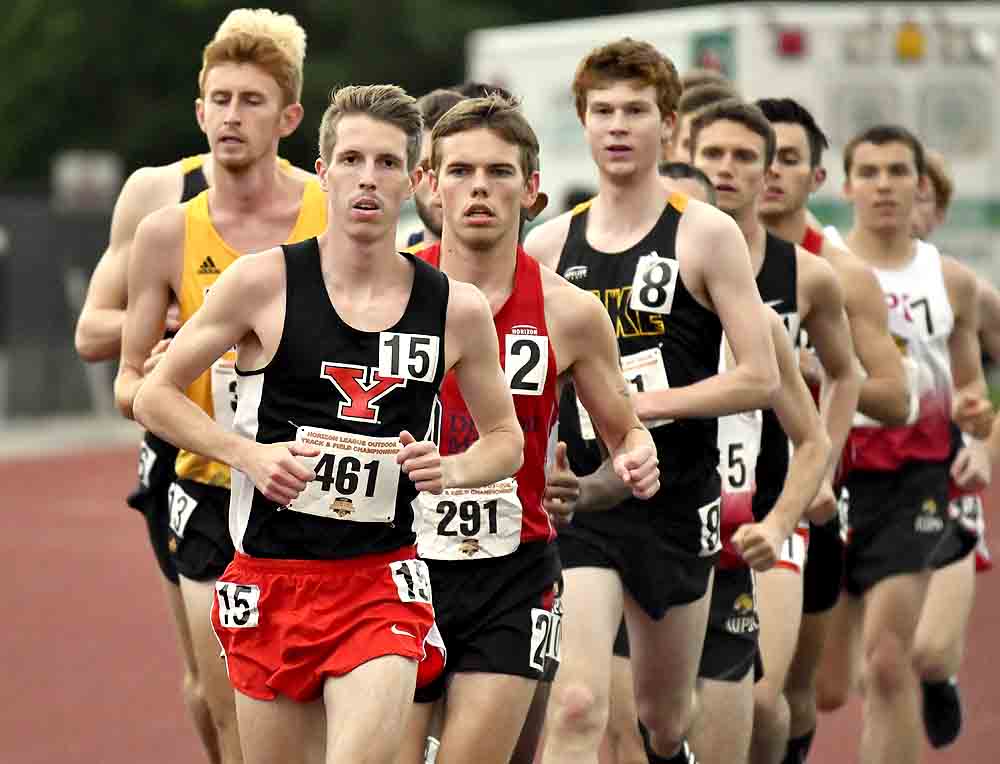 Tribune Chronicle / Robert Hayes Howland graduate Ryan Sullivan, front, leads the pack at the start of the 10,000-meter run Friday at the Horizon League Championships at Youngstown State. Sullivan won the event in his senior season as a Penguin.

YOUNGSTOWN — “I’ve always had the individual goal to be a champion myself, and today I finally realized those dreams.”

Howland graduate Ryan Sullivan wanted to end his Youngstown State career on a high note, and he sure left his mark on Day 1 Friday of the Horizon League Track and Field Championships on the campus of Youngstown State University. Sullivan won the 10,000 meters in a time of 30:52:30.

YSU coach Brian Gorby couldn’t have been prouder of Sullivan.

“I’m so happy for him, and so happy for everything he’s done for the program, it’s just great to see him go out. He redshirted last year for this moment, and to see it all come together for him and to be healthy and to be able to do it in front of his family and all of his friends,” Gorby said.

Sullivan has come close to winning the outdoor 10K at YSU before, with his best finish being second place during his freshman season in 2015.

He’s just happy to represent his hometown at the collegiate level.

“YSU has a great tradition of bringing so many athletes that are from this region, it’s amazing to come out here on the home track, 20 minutes from home and represent Youngstown and the community.

“It just feels amazing to be able to bring that home to our hometown.” Sullivan said.

Winning isn’t something new to the track program at YSU, with both the men’s and women’s team coming off of first-place finishes in the indoor season.

Sullivan is happy to be a part of that prestigious program.

“I came in here as a distance runner and I was familiar with the distance side, but I had no idea until my freshman year that we had a dominant field crew, jump crew, pole vault, sprints,” he said. “I mean it’s just amazing to be a part of this team and we all work hard. You’ll see three or four different practices just in one day and it’s amazing to be a part of a team like that.”

“He’s maybe the most successful distance athlete we’ve ever had, and he hit the conference at the wrong time with who was in the conference. For years the distance has been tough.

“He deserved many, many, conference titles but the guys he had to run against were national qualifiers,” Rupe said.

It was a great first day of the Horizon League meet for the Penguins, as both the men and the women lead going into the second day. The men currently sit at 52 points, and the women have 46 points.

Gorby couldn’t be happier about the way the first day went.

“He’s (Sullivan) been part of so many of these, and he’s never ever once said, ‘Can I just do one event?’ He’s done three events, and always been second, third, or fourth helping the team out,” Gorby said.