YSU back in WNIT

Penguins go to Cincy on Thursday 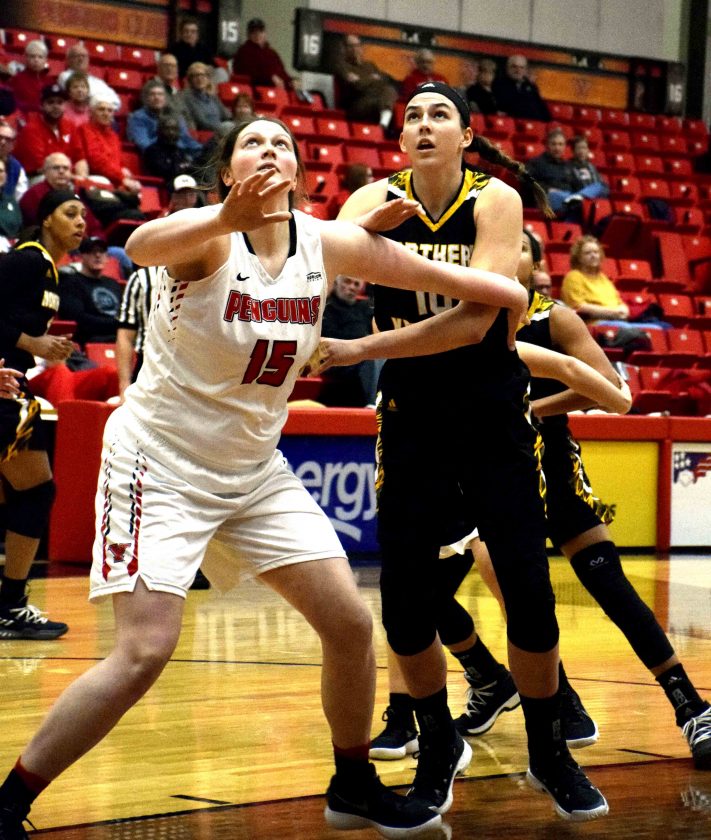 Sarah Cash has toiled through numerous knee issues dating back to her career at Lordstown High School. She came to Youngstown State University as a preferred walk-on player.

Then, Cash had an opportunity in the first couple of games into her career. From there, she became the heart and soul of the women’s basketball team.

She’s a graduate student and came back this season for her fifth year with the Penguins.

Melinda Trimmer came from West Branch High School, leading the Warriors to the Division II Final Four. She’s eventually grown into a valuable member of the backcourt for this year’s Penguins.

Alison Smolinski has had a knack for 3-point shooting. This season, she became YSU’s all-time leader in 3s and the Horizon League’s leader for 3s in a season.

All three are the team’s seniors and will lead the Penguins (22-9) into Thursday’s first round of the Women’s National Invitation Tournament at the University of Cincinnati (21-10). Time for the game is yet to be determined.

This is the team’s third trip to the WNIT in school history.

YSU beat Indiana State and lost at Toledo in 2013, while losing in the first round against Duquesne in 2015. The Penguins also made it to the Women’s Basketball Invitational in 2016 and 2018.

The Penguins were on spring break last week, so this team went through some basics during that time, waiting for their fate.

“We’ve been working hard on basic fundamentals this last week and last couple of days, things we didn’t get a lot to work on throughout the second half of the season because we were so busy playing games all the time,” Barnes said. “You get away from the little things. We worked on a lot of basic stuff, a lot of shooting, just fundamentals of what we build our program on.”

“I think we played a heckuva game,” Barnes said. “Green Bay is a great team. They were way ahead of us in RPI and rank. For us to be able to battle. From being down 12 and come back and almost get a win, that was a heckuva battle for our kids.

“I don’t think there’s anything to be disappointed about or not proud of. If anything, proud of how hard we battled back to give ourselves a chance to win.”

The Penguins embark on their new postseason trail Thursday.

“I know how excited the players and the staff, the YSU community and local community, how excited everybody is that we got in,” Barnes said. “Now we got to start preparing and get ready.”