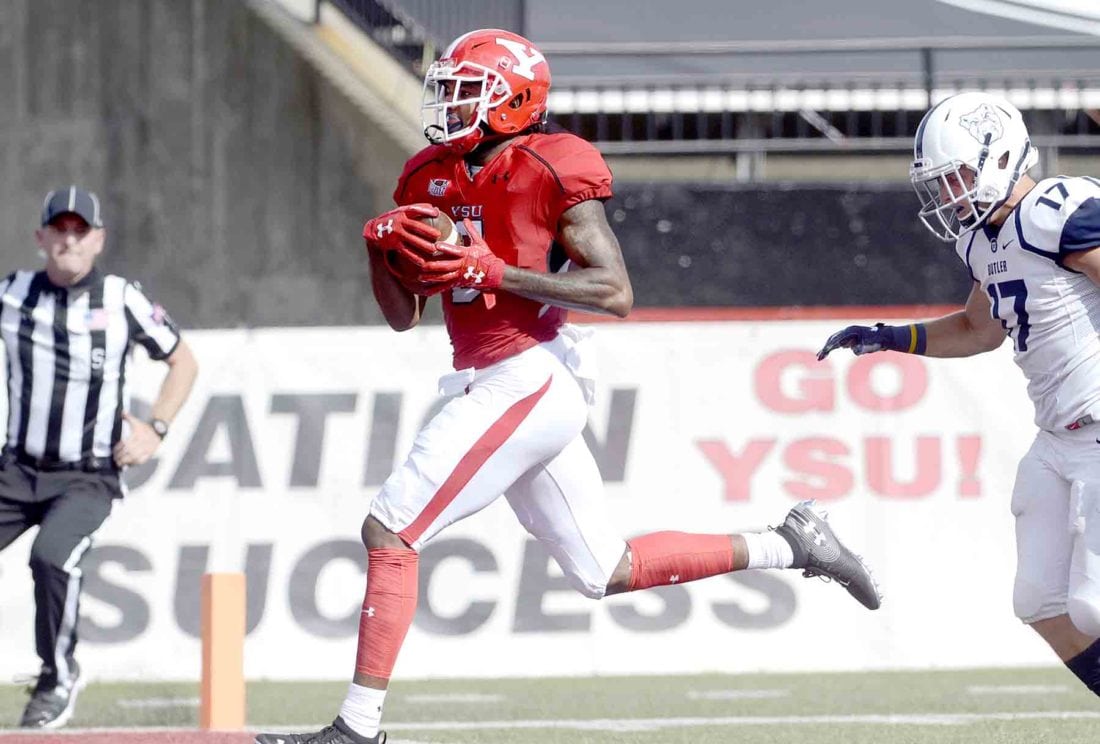 YOUNGSTOWN — No scholarships. No respect. No chance.

No problem for the Butler Bulldogs.

A non-scholarship program that was 35 1/2-point underdogs to 24th-ranked Youngstown State pulled off one of the biggest upsets in Penguins’ history, knocking off YSU, 23-21, with a field goal in the final seconds on Saturday at Stambaugh Stadium.

The loss was the first season-opening defeat for YSU since 1995 — snapping a streak of 23 consecutive victories. It also baffled Penguins coach Bo Pelini, who thought his team was prepared leading up to the game.

“I don’t know if I’ve ever been this disappointed or embarrassed — there are a lot of words I could mention,” he said. “I thought we were ready to play. Obviously I was wrong. The comedy of errors that happened out there, it’s just hard to describe. It was one guy after another taking their turn, and they (Butler) executed and made the plays. Anybody will beat you when you don’t respect this game. 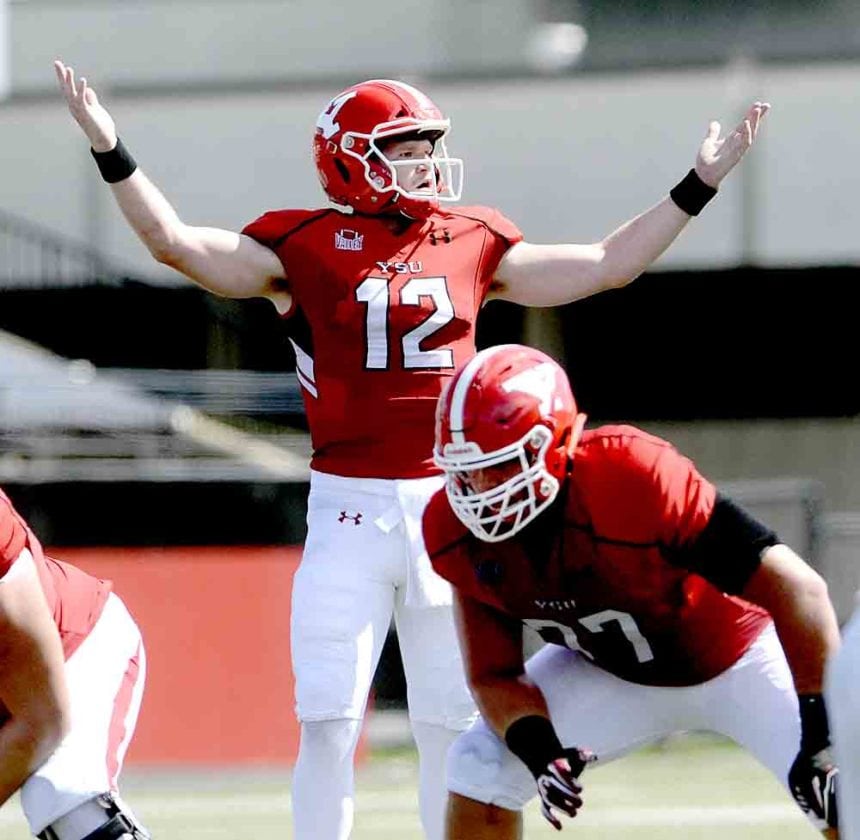 YSU's QB #12 Montgomery VanGorder finds confusion at the line while trying to get a play called against Butler during 3rd Qt. action...by R. Michael Semple

“We didn’t deserve to win the football game, and we didn’t,” he later added. “It would have almost been a shame if we did, because that team outplayed us.”

Butler, which lost to the Penguins, 44-13, in 2014, outplayed YSU from the start, taking a 7-0 lead just minutes into the game, and while the Penguins appeared to be pulling away with a 21-7 edge entering the fourth quarter, the Bulldogs fought back and scored 16 unanswered points.

Butler moved to within 21-14 with an 11-play, 80-yard drive that was capped by a 6-yard touchdown pass from quarterback Will Marty to wide receiver Pace Temple with 9:20 left in the fourth quarter. Temple, a senior wideout, dominated YSU, catching 14 passes for 167 yards.

YSU gained just one first down from that point on, and the defense simply couldn’t stop the 6-foot-1, 200-pound Temple.

“Pace is a special player, and he’s going to make plays regardless (of who we’re playing),” Butler coach Jeff Voris said. “But today we were able to move him around a little bit, and we were able to move him around because we have a lot of other guys that can play multiple positions. Backs can play in the slot. Tight ends can play in the slot, and you can move some guys and allow him to go some places where maybe it’s not as easy to double-team him.” 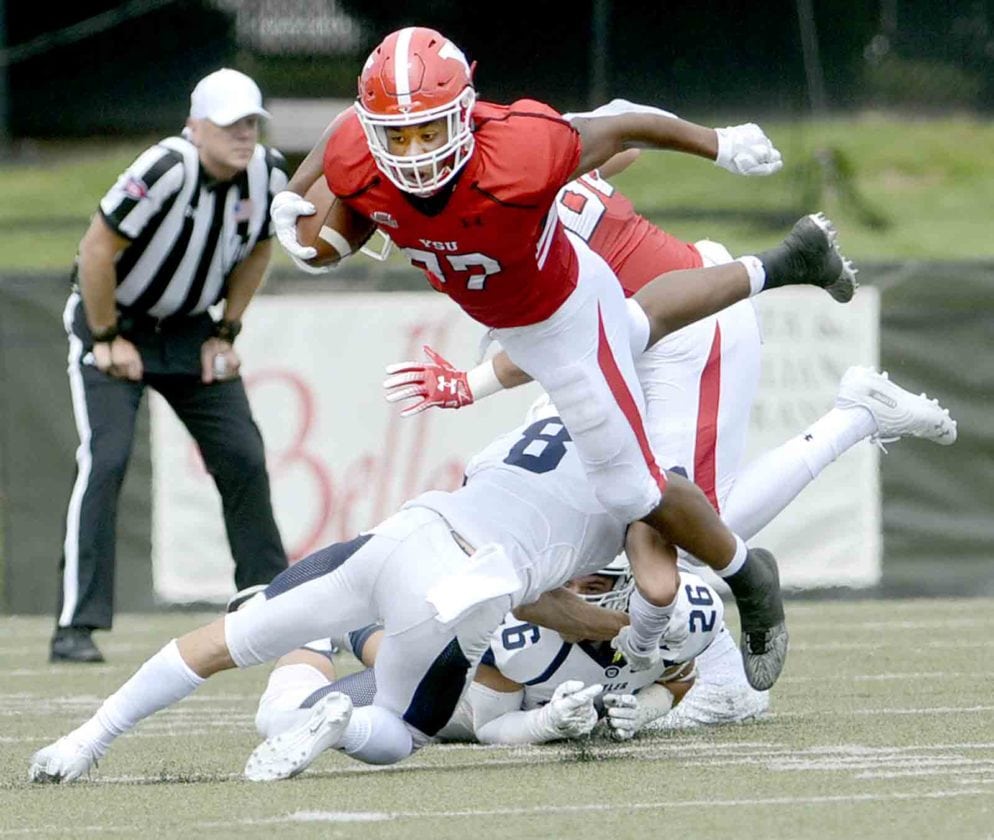 After a three-and-out by YSU and a 28-yard punt by Mark Schuler, Butler took over at the YSU 42 with 3:18 left in the fourth quarter, trailing 21-14. Marty hit Temple on three straight passes to move to YSU’s 19. Marty then ran seven yards for a first down, and with 1:30 left, he rolled to his right before throwing a pass back across the field to a wide-open Sam Yeaton, a tight end who snuck off the end of the line and hauled in the 12-yard TD pass.

The Bulldogs, trailing 21-20, decided to go for the 2-point conversion with 1:20 left, and it appeared YSU would hang on for the victory when they sacked Marty for a loss, but the ball seemed to bounce Butler’s way on this day.

On the ensuing onside kick attempt, the ball slipped through the hands of the Penguins’ Terray Bryant, and the Bulldogs recovered and had the ball at their own 47 with 1:18 remaining and zero timeouts.

“First of all, the guy should have let it go. The ball would have went out of bounds,” Pelini said of the onside kick. “If you go for it, you better catch the ball. … It was terrible by us. You’re supposed to let it go to the back line, and we didn’t do that.”

On the final drive, Temple caught two passes for 21 yards, and Thomas Baldwin added another for eight more. The Bulldogs were at the YSU 27, and it looked like the field goal would be a cinch when Temple broke wide open at the 10-yard line, only to experience his only drop of the day.

Marty got one yard on third-and-10, so that meant Drew Bevelhimer had to boot a 43-yarder. A first-team all-conference pick, Bevelhimer missed a 32-yard field goal earlier, and a bad hold led to a turnover on downs in another instance. With the wind at his back, he hit a low line-drive that barely cleared the crossbar with 4 seconds left.

YSU was only able to advance the ensuing kickoff to the 33 as time ran out, sending all of Butler’s players onto the field in a raucous celebration.

“Our guys did a great job of believing they were going to get it done and kept playing,” said Voris, whose Bulldogs had never defeated a team from the Missouri Valley Football Conference before Saturday. “We willed the ball to bounce our way enough times.”

YSU must bounce back quickly as they face FBS power and 17th-ranked West Virginia at 6 p.m. Saturday in Morgantown. 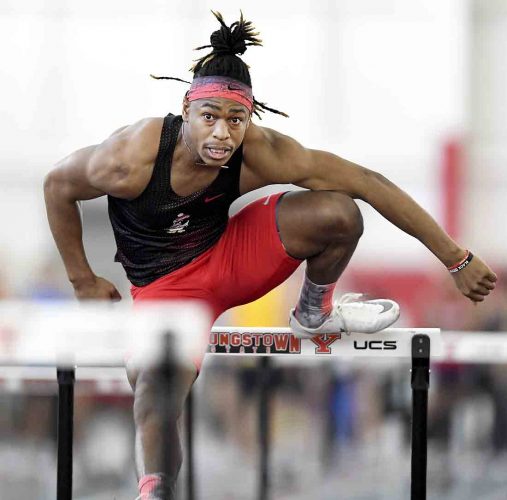