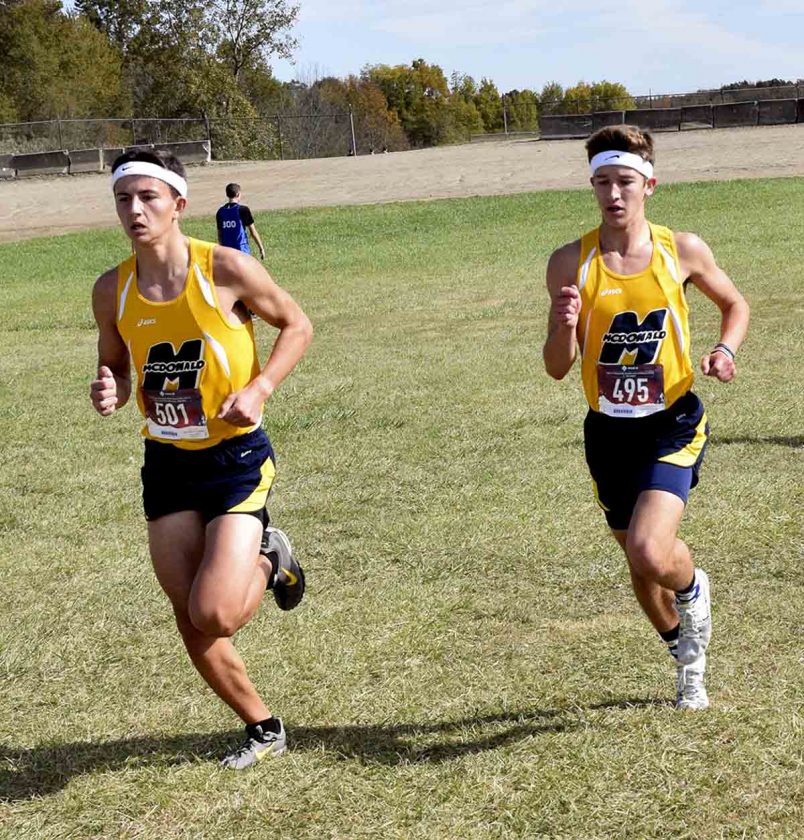 Ethan Domitrovich felt the aches and pains shoot through his legs all too often, more than he cares to recall.

The McDonald High School graduate is free of those setbacks.

He’s doing his own mini triathlon each day, running 4 to 8 miles, bicycling and swimming.

It’s been a world of trial and error the past couple of years to figure out what works to keep him from feeling the all-too-often shin splints. That happened four times over his running career in different spots because of recurring problems in his bones.

Running this past cross country season healthy was more of a goal than running a personal best 16:26 at the Tiffin Carnival.

Not worried about the postseason performances. Finishing. That’s all the McDonald distance runner wanted. Running from late August to early November. Domitrovich couldn’t ask for more.

“The main goal of cross country was to just finish the season healthy,” he said. “That happened. I don’t have any complaints about that. I’m happy to be going into college healthy and be able to train the way I was hoping to.”

Domitrovich is heading to John Carroll University to continue his cross country and track and field career.

He chose John Carroll over Walsh because of his major, exercise science.

Did those physical struggles in high school sway his decision in a major?

“I think it definitely had some influence,” Domitrovich said.

Sure, not running this past spring because of the COVID-19 pandemic was rough, but so was overcoming injuries.

“It’s been really hard,” he said. “A lot of these injuries come out of nowhere. They were hard in the moment, but looking back I feel I was able to learn a lot from them and have the perseverance to push through. Things don’t always go your way. Nothing is every going to go perfect. Just being able to keep gritting and do what’s necessary in the moment while not sacrificing anything for the future.

“I have to be careful in my training and make sure I stay healthy from here on out.”

McDonald boys track and field coach and Ethan’s father, Lou, has seen his son go through his rough patches. He’s seen him excel as well.

Maplewood’s Michael Shipman and South Range’s Ian Pierson, runners Ethan Domitrovich has faced over his career, are at John Carroll — helping the younger Domitrovich adjust to life at the collegiate level.

“They’ve sort of taken Ethan under their wing a little bit with their training and coach Kyle (Basista) there has been amazing,” Lou Domitrovich said. “If the young man can stay healthy, I really think the sky’s the limit for him.

“He accomplished so much academically at McDonald being the valedictorian. I hope and pray that some athletic things can work out for him at the next level.”

PITTSBURGH — The Pittsburgh Steelers are united heading into the 2020 season. Yet even with every member of his ...

CLEVELAND — Jose Ramirez homered from both sides of the plate and drove in four runs, and the Cleveland Indians ...

YOUNGSTOWN — The fourth annual running of the Youngstown Marathon and and Half Marathon won’t happen on Oct. ...

CLEVELAND — Indians manager Terry Francona remains absent from the team to get rest while dealing with a ...

CLEVELAND — Oscar Mercado’s gamble paid off for the pitching-rich, hitting-poor Indians. “It probably ...