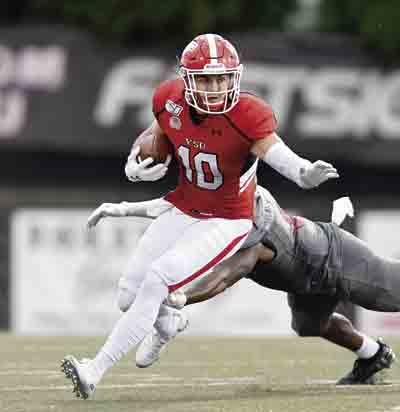 YOUNGSTOWN — Jake Coates has always played his role as a football player.

That’s his motivation every time he steps on the field, and his role has varied greatly over the years.

He was Mr. Everything at John F. Kennedy High School, playing nearly every snap as a three-way starter as he led the Eagles to a state championship in 2016. Coates was a track star as well and had the chance to run at Penn State.

He chose to play football at Youngstown State University instead. His playing time has gradually increased, as Coates has mainly been utilized as a return specialist on kickoffs and punts — becoming one of the league’s biggest threats.

The wide receiver is hoping to expand that role in his final season with the Penguins. 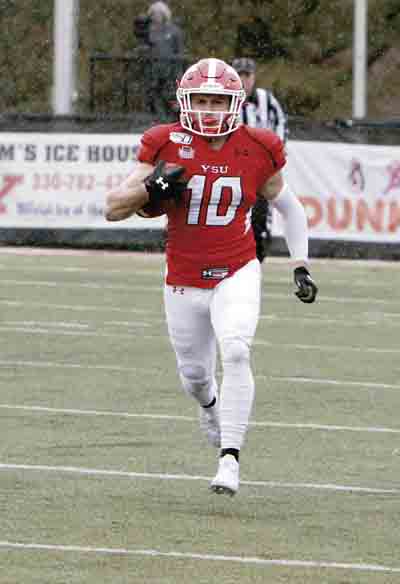 Submitted photos / Youngstown State Athletics Jake Coates was one of the conference leaders in returning punts last year, bringing one back for a touchdown.

“Obviously my goal is to play more receiver this year,” said Coates, a 5-foot-10, 170-pound senior. “I did my part last year, returning punts and kickoffs here and there, but I would like to play more. Whatever I can bring to the table, I want to help this team win a championship. So, whatever the coaches think that is for me, I’ll do my best at it.”

Phillips is still trying to get to know his players. He took over for Bo Pelini in early February and only had a short time to work with the team before the COVID-19 pandemic struck.

He and the staff have spent much of the recent quarantine using different virtual software programs to get to know the players a bit more. Phillips understands that those calls only go so far when it comes to building a relationship, and while he doesn’t want to embellish his personal relationship with the players, he sees a lot in Coates.

“From the few months we had on campus doing some drills, he’s going to be a work-hard, go-hard type of kid,” he said. “There’s probably not a day that goes by that he’s not working. Whether it’s lifting, whether it’s running, whether it’s going and catching footballs, whether it’s working at his family’s business, Jake is one of those that’s a hard worker. He exemplifies that. He leads by example.

“If we can get all of our kids to work as hard as him, we’re going to have chances to win a lot of football games this fall.”

Coates is intrigued to see how this year’s team comes together.

He was one of the bright spots from last year’s 6-6 campaign. He was named second-team all-conference as a special teams player. His 353 return yards on 32 punts set a school record, and his 11-yard average was second best in the conference (1 yard short of the leader). He returned a punt 63 yards for a touchdown — his first as a Penguin — in a home game against Robert Morris, and he had a career-long 81-yard return against Western Illinois.

While excited to be contributing more, Coates is hoping he can become a bigger part of the offense (he has two career catches for 41 yards). Still, he isn’t letting any selfishness get in the way of bringing YSU together.

“Right now, I’m really just focused on the team,” he said. “We need to get the guys back together, especially with a new coaching staff coming in. We didn’t have a ton of time with them, so as a team and a coaching staff, we need to get know each other a lot more, which we have over Zoom, but that can only do so much.

“I’m excited to see what this season offers, coming off kind of a disappointing season last year. One last go-around for me, so that kind of makes it fun.”

Phillips is probably more anxious than anyone.

The majority of spring practice was canceled because of the pandemic, and that removed an integral part of his evaluation process. That’s why it was tough for him to say exactly how he could use Coates’ abilities in the offense.

Phillips was able to watch film from last year, and the Mahoning Valley native remembers Coates playing in high school, so he has an idea of the speed and agility Coates possesses.

“Special teams is a third of the game of football,” Phillips said. “So when you have a threat like Jake… he has the opportunity to turn a 10-yarder into a gamebreaker. Those are the differences in a football game. Those are big plays that, if you did a study, teams that win, they win with a greater chance when plays like that are made.

“I’m sure he wants to do it more on the offensive side of the ball,” Phillips acknowledged, “and he’ll have every opportunity because he has that speed. When you’re a 10.8 (seconds) guy in high school (in the 100-meter dash), you’ve got that track speed. We know he’s a good football player, so I’m anxious to see what he can do for us this fall, not only on special teams, but offensively.”

Phillips said he is still awaiting word as to when he can start working the players again. There have been reports of possibly creating some offseason training activities, similar to the NFL’s OTAs, but there has not been any official word from the NCAA.

“Whenever we get back,” Phillips said. “… We have to do a great job finding out what our kids can do in a quick time.”