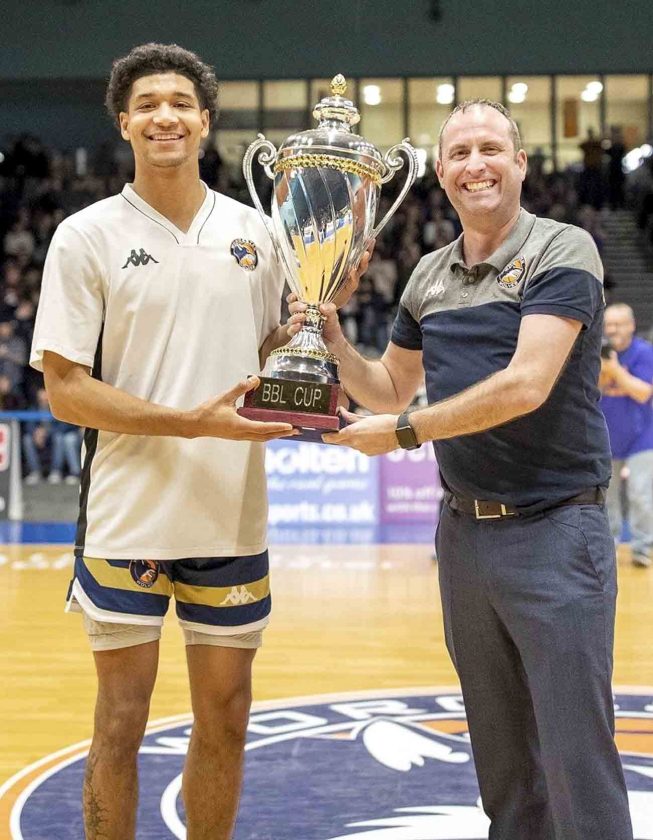 Mark Hughes was standing by his new coach Matt Newby. The two were celebrating winning the British Basketball League cup trophy with the Worcester Wolves, who stood victorious among the other 10 teams in the league.

That late January night is what set Hughes, a former Ursuline High School and Wright State University standout, apart from the rest — playing across the Atlantic Ocean.

It’s what came next that stunned the 6-foot-4 guard, a trip to the nearby Worcester Warriors — the local rugby club.

The Wolves sat in loges, taking in all the action on the field below.

The experience was his first, seeing bruising, well-built men violently crashing into one another in pursuit of a weirdly-shaped ball by traditional American sports standards. No pads or helmets like football. It intrigued the Youngstown native.

“I’m going to stick to basketball,” Hughes said. “There were some big boys out there. They were hitting each other there at full speed, no padding, no equipment of any kind. It was nothing like football.

“That was a really different experience for me. The boys are big, too. They have the cauliflower ear. It’s disgusting to see. That’s a brutal sport. I don’t know if it’s for me.”

Basketball is Hughes’ sport. He averaged 14.4 points per game, shooting 44 percent from 3-point range and 55 percent from the floor when play stopped in mid-March. The COVID-19 outbreak forced the BBL to cancel the remainder of its season.

Hughes was sent home, unsure where or if he’ll be playing next season.

Playing basketball since he’s been back has been difficult with the Ohio Department of Health closing school facilities until June 30. Good luck getting in a gym. Hughes has only played four or five times since he’s been home.

He maintains his fitness by running almost every day at a track near his house. Last Sunday, not so much, it was snowing.

Welcome back to Ohio with weather more conducive to stay at home orders, which has been the case through most of May.

“I’m trying to stay as healthy as I can,” Hughes said. “Whenever I get an opportunity to get in the gym, I’ll definitely make the most out of it.”

He admits he’s a big sightseer and visited London a few times with pictures of Buckingham Palace and the London Eye (a gigantic rotating wheel that helps visitors have a bird’s eye view of the city).

Big Ben was being renovated.

“I didn’t get to see it in all of it’s glory, which was kind of upsetting to me,” Hughes said. “I really wanted to see that.”

On the team’s trip to Glasgow, Scotland, he saw a castle.

“Just a lot of architecture up there, which I thought was pretty cool,” Hughes said.

Almost as cool as his first year as a professional basketball player.

“It was a great experience, especially for the city of Worcester,” Hughes said. “The fans were super dedicated to us, traveling on the road with us. To give them a championship, it meant the world to them and the city.

“It meant getting back to winning ways with something I wanted to do my first year there, kind of build a good resume to propel me further in my career.”