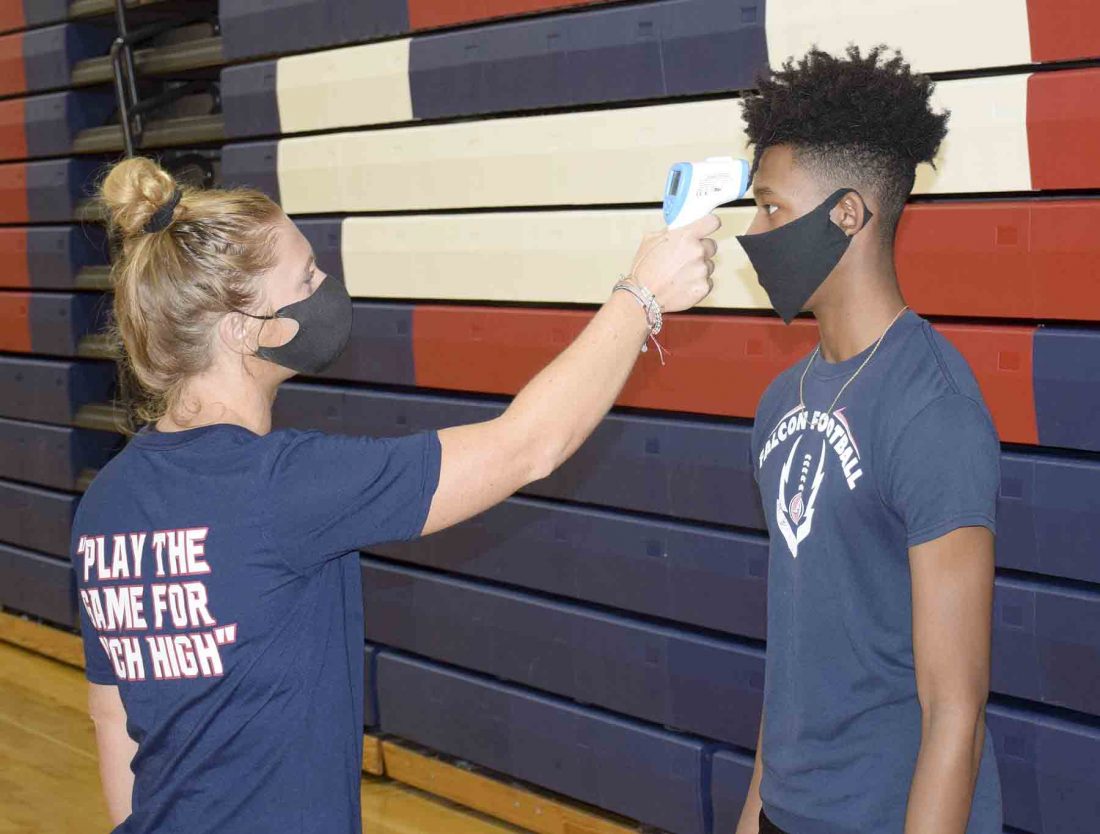 AUSTINTOWN — T.J. Parker had his mask up over his beard.

It’s not the look he envisioned when he took over the Austintown Fitch football program in December. Then again, who saw this coming?

The former Falcons athlete was on social media with the constant hashtag #FeedTheNest. Offseason conditioning and weightlifting were highlighted. The Falcons seemed as if they were ahead of the curve, so to speak.

The COVID-19 pandemic took a stranglehold on the area and by mid-March, all school sports-related activity in Ohio was suspended. All that mattered was the collective group of us — not only in this area, but around the world — working on flattening the curve of new cases, utilizing the notion of social distancing.

But spacing wouldn’t keep the Falcons apart. They virtually kept their team together with Zoom chats and challenged their athletes with training they could do on their own. 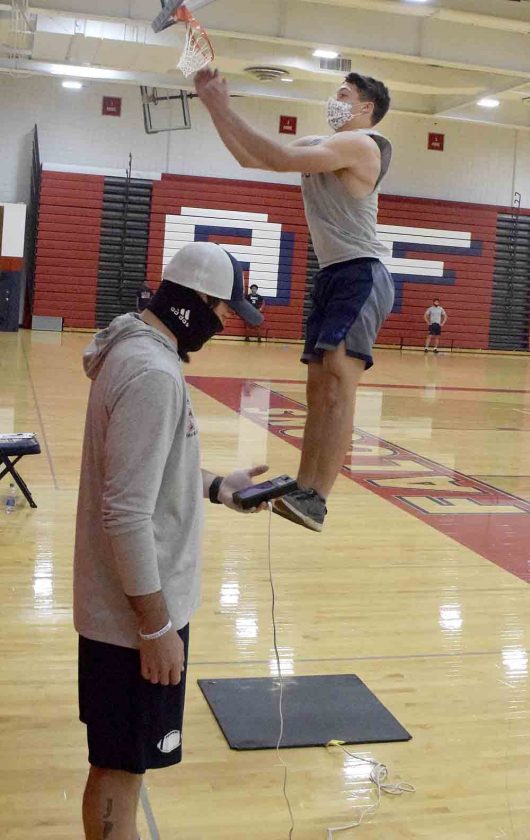 “How can we challenge the kids?” Parker said. “We wanted to push them. Every week you’re going to have a challenge. It may be post a quote to social media. It may be challenge a player. It may be us posting a video of a player pushing a vehicle. We try to get creative with it.

“Anytime you can keep the kids on their toes and make competing fun, it’s a good thing.”

No handshakes or any greetings you’d normally see with football players with people wearing masks and remaining at least 6 feet apart. It bugs Parker, as it does most people.

“I’m a high-energy guy,” he said. “There’s times I’ve caught myself, see somebody for the first time. I’m so excited how they look, how they’re doing the drills. I want to chest bump them or give them a high-five. I can’t do that. 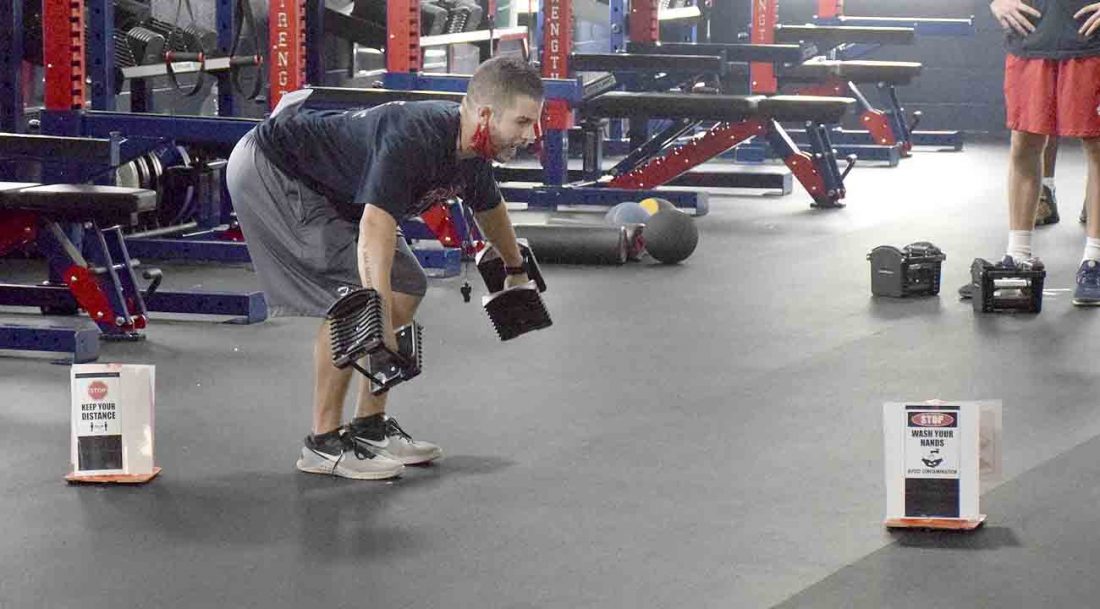 The state ruled last week that athletes could return to action as long as guidelines by the Centers for Disease Control and Prevention were followed. The opening of school facilities was to be determined by individual school systems, no longer the Ohio Department of Health.

Fitch’s players and coaches knew this day was coming and were prepared for a return to play.

Parker and his staff wanted to bring back thes team as soon as possible, and so did the administration on the Fitch campus.

How would they go about doing this to comply with guidelines?

Strength and conditioning coach Daniel Wedding was on a Zoom call with his fellow professionals around the state.

Parker said he’s been in touch with others trying to figure out what they’re doing and how they’re doing it in order to continue getting training for their athletes.

“It’s been a process,” Parker said. “I think we have the right people. We have a great administration who set the guidelines, the recommendations. We’re going to follow them to the T. We’re excited to get back with the kids and work with them in some sense. Even if it’s little-by-little, it’s still going to help.”

There are groups of 16 players coming every 45 minutes during the day, starting in the morning and going throughout the day. There are about 120 players in the program with some on a waiting list.

Each player has to staying 6 feet apart from others, wear a mask and turn in a signed permission from their parents or guardians.

A large container of hand sanitizer is there before each session begins and at each station, to be used by each athlete and coach.

There are temperature checks for each athlete. Questions follow, have they had a fever, been in contact with anyone with COVID-19 or had a cough in the last two weeks?

Everybody brings their own water bottles, no sharing, and all stay away from the water fountains.

White duct tape Xs are placed on the gym floor and small cones are set up. Coaches keep a watchful eye on things, reminding the athletes to keep their distance.

Some athletes were in better shape than others. Coaches were monitoring progress. There were some tempo runs and sets of one-by-20s. Vertical jumps were measured. Sprints across the gym were spread by at least 6 feet apart. Eventually, the team will do drills on the field turf. There was a constant threat of rain this day, keeping activities limited to the gym and weight room.

Masks have to be worn while they’re listening to instructions or not doing activities.

“For this, they have to pull it up and wear it. If you don’t have a mask, you’re not permitted in,” Parker said.

Wedding said he wants his athletes to feel safe.

“Everything we’ve done has been built around the safety and health of the kids,” he said. “For us, we don’t want the athlete to feel they have to leave the mask on. When we’re running, we want them to pull that mask down. If it’s a safety precaution they need to keep it on, we leave it up to them.

“The mask can make it difficult with a thing like that. That’s why we try to pull it down for a rep, let them recover and catch their breath and they slide it right back on.”

Masks and social distancing are about keeping everyone safe and allowing Fitch to resume preparation for the season.

In the days to come, the intense heat emanating from the field turf where it gets 10 degrees warmer than the normal temperature will be a factor. It could present another issue for the athletes.

“The one thing I’m worried about is one of the recommendations concerning the water bottles,” Parker said. “Today is a great day because we’re inside. When we’re outside and it’s 96 and you have one water bottle, suck it down and it’s done. I’m scared of, OK we’re avoiding heat exhaustion or we’re avoiding COVID. Now there’s heat exhaustion or fatigue. We can run into some situations there.

“We bought some cases of water for the kids anytime they need something.”

Starting June 15, the school system’s food service is giving athletes each an individually-packed breakfast and lunch.

Athletes step into the weight room where Wedding is waiting with his interns from Youngstown State University and a coach or two to monitor the situation.

Every group is to go one direction. No group will interact or cross another as the day resumes.

There are signs posted to keep up with the recommended guidelines. Those reminders are posted at all workout stations.

The newly-renovated weight room is sanitized an hour before the first group arrives.

“At the conclusion of each group, we will have the group participate and clean everything they use (with disinfecting wipes),” Wedding said. “We’re confined to certain spaces so we’re not spread out everywhere as you can see. At the end of the day, we’ll clean once again as a staff. Then, we’ll have an individual in and do a deep clean at the end of the night.”

There are coaches spotting for each athlete lifting as the others remain at least 6 feet apart.

Football isn’t the only program using the weight room. Wedding said each sport at Austintown Fitch is scheduled to use the facility this summer.

Following guidelines are great, but getting that personal interaction — even with social distancing — is so much better.

“It feels great,” junior Devin Sherwood said. “I’ve been able to get some lifts on my own. It’s a really good feeling to lift with the team and see everybody’s faces out here. It’s a good feeling.”