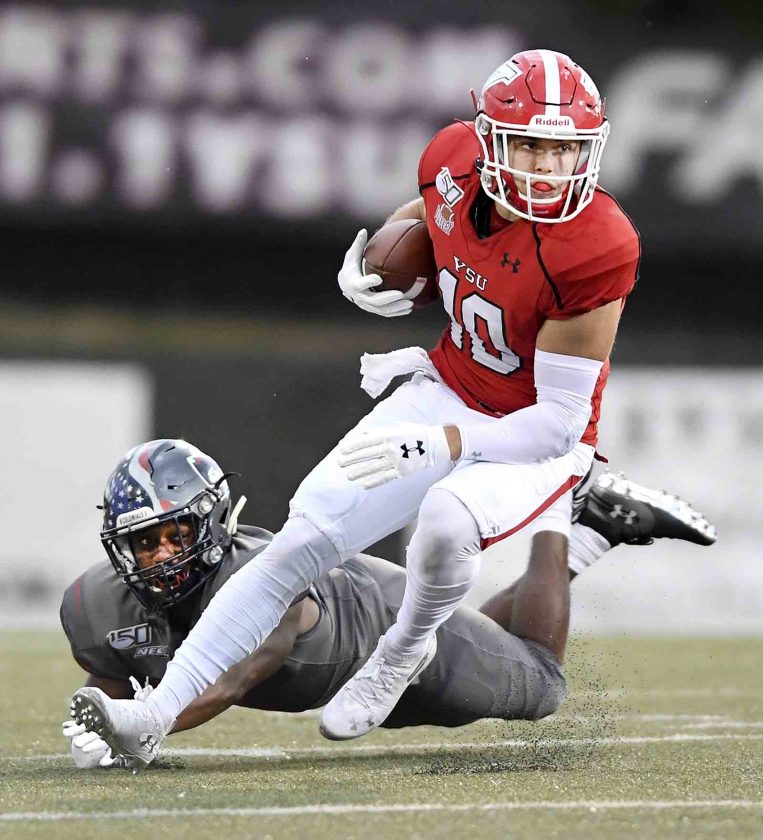 YOUNGSTOWN — The first phase of bringing student-athletes back to college campuses begins Monday, and Youngstown State University will be part of the initiative.

The NCAA announced last week that student-athletes in football and men’s and women’s basketball will be allowed to participate in voluntary athletic activities starting June 1. The facilities had been closed off since mid-March because of the coronavirus pandemic.

As of now, no weight room or lifting equipment can be utilized. All the training will take place outside and will gradually move indoors to the weight rooms and other training areas.

YSU football coach Doug Phillips said he will allow players to return, and he is cautiously optimistic about the situation. He is glad athletes can use the facilities because many of them don’t have equipment at home. He also prefers his players work within the confines of the campus, where he knows the amenities are being properly sanitized.

“It’s voluntary workouts, which means no football actions,” said Phillips, who is not allowed to attend the workout sessions. “It’s mostly kids being able to work out under the guidance of strength coaches and trainers.”

While it’s a step forward, the university did create several guidelines to follow, starting with 10 or fewer players training at a time. That means the players who are able to attend will do so in groups, with players signing up for specific times.

Phillips said everything will be disinfected after each group departs. Trainers and other staff members are required to wear face coverings during the workouts. Student-athletes must wear them to the field but can take them off during the drills. Everyone’s temperatures will be checked before entering the facility.

Phillips, who only had a few weeks of in-person time with the players before the COVID-19 pandemic began, said he sees it as a time for his players to work together and build a better rapport.

“It’s all about doing it the right away and keeping them safe and healthy,” he said. “The opportunity to make them feel like it’s not going to be normal, but it’s more normal than the quarantine was. We’re not asking kids who are out of town to, ‘Hey, run back into Youngstown.’ So, the kids who are in town, especially the upperclassmen that are here and working in town, they’ll have an opportunity now during the course of the day to sign up and work out at the facility.”

Players are anxious for it to begin.

The Penguins have been apart for much of the last three months, with spring football being quickly interrupted by the pandemic. They were forced to try different exercises and workout routines at home, which limited their training.

“It’s a huge step toward this upcoming season,” said senior wide receiver and kick returner Jake Coates, a former John F. Kennedy High School star. “It was a long three months during the quarantine. It was tough working out at home. Not a lot of guys have equipment at home, so all the coaches were giving us home remedies to make homemade weights and stuff like that, just to stay in shape. It’s not the same as being with a group and pushing each other and working out with each other.

“We have a lot of time to make up for, but I’m excited to get back going next week.”

Phillips isn’t sure what the next move is by the NCAA.

He is hoping for some time to work with his team before preseason camp begins in August. He said he hasn’t heard anything specific, but the former University of Cincinnati assistant coach has had discussions with Bearcats’ coach Luck Fickell to get an idea of what may be forthcoming.

His main interest is to find out what the rest of the Missouri Valley Football Conference is doing.

“We’re hoping to hear word. We’re checking with our league and when schools are bringing back everyone,” he said. “We call it summer access, being we can start doing football (workouts). Whether it’s (organized team activities), where we can instruct and do drills with no footballs — at least we can go on the field and do drill work without footballs — but do drills and meet with them. We’d call that OTAs. I think they’re looking at if we can do that mid-July, late-July. I think that’s what everyone is waiting to see, what we’re doing in our league.

“I talk to (University of Cincinnati coach) Luke (Fickell) the most about their summer access,” he added, “and they’re bringing their kids back July 1. We don’t necessarily have to compare to Cincinnati. We’re not going to do what they do. We just want to make sure we’re doing what the Missouri Valley (Conference) is going to do.”

No racing at Sharon

The Ohio Department of Health has mandated activities to be limited in the state of Ohio due to the continued ...

CLEVELAND — The spotlight for change is shining on the Cleveland Indians. Now that the NFL’s Washington ...

The Pittsburgh Penguins opened training camp Monday after voluntarily sidelining nine players who may have had ...

16U DuraEdge 4, Avalanche 0 – Caleb Jones had two hits, including one double, and scored once, Braden Gebhardt ...