Penguin players stay connected with fans, each other 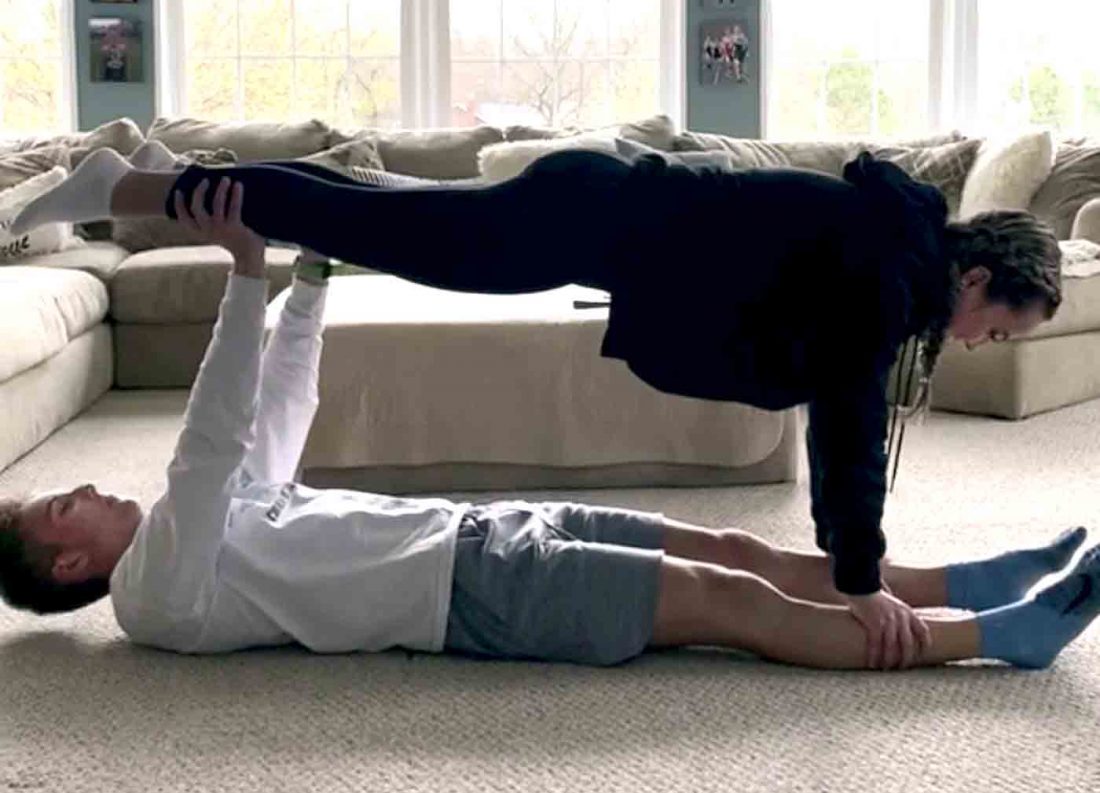 Mady Aulbach considers herself luckier than most in quarantine, going through the COVID-19 pandemic.

The Youngstown State University women’s basketball freshman guard has her brother Jack, a senior at Blackhawk (Pa.) High School. He’s a distance runner and has signed to run for the Penguins’ cross country and track and field teams.

They’ve been working out together, trying to get each other ready for their respective seasons.

“He’s definitely my biggest motivator,” Aulbach said. “He’s younger than me. He’s somewhat of a role model to me. If I work out hard, he probably works out 10 times harder than me. I’ve never seen him take an off-day. He’s so dedicated and motivated by his craft of running that he has everything down to a perfect science even when it comes to his nutrition and hours of sleep he should get. Everything he does is for a reason and super beneficial for him as well as working out for him. I’ve been having him involved with me doing some different workouts while I’ve been at home and throughout quarantine.

“I’ve used him to my advantage because I have a mini-personal trainer in my house, just how knowledgeable he is as far workouts, nutrition. He’s an awesome person to be in quarantine with right now.” 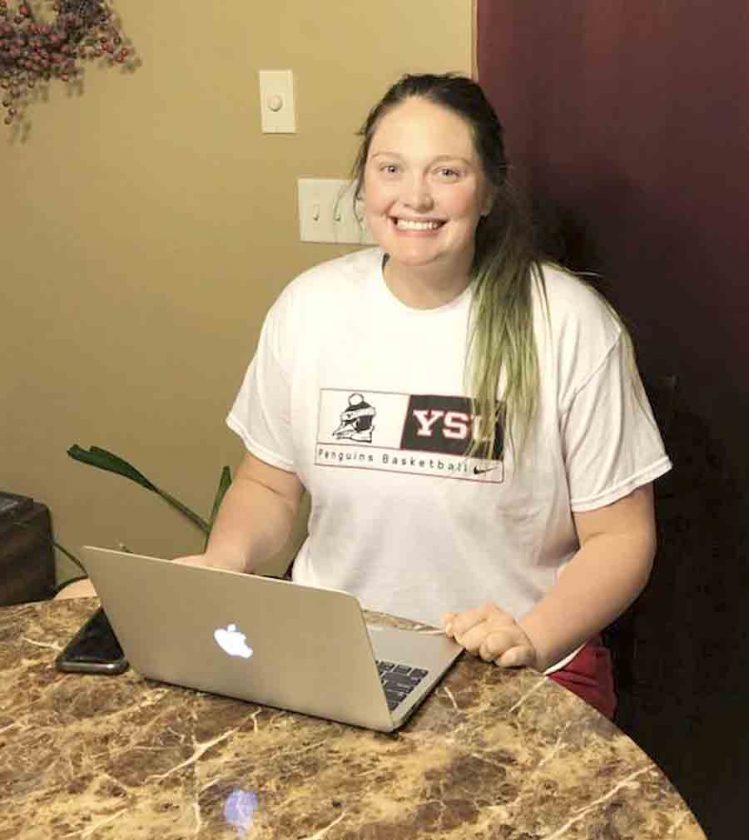 Submitted photo Mary Dunn worked on a video, which debuted Friday, of the YSU women’s basketball team set to the new lyrics of the 1985 song “We Are The World.” The YSU women have been active on social media during the COVID-19 pandemic.

She’s been doing workouts online, inspiring others on her social media accounts.

“A lot of younger girls were asking what I do as far as ball handling and some different strength and conditioning stuff when I’ve been in quarantine,” Aulbach said. “I did some different ballhandling workout things I do. I would send them to them, just to give them an idea of something to do when you can’t get into a gym and you only have your driveway or garage. I’ve been doing some small stuff like that.”

How could the YSU women’s basketball team let people know how they’ve been staying busy and in shape during this unexpected down time? The NCAA does not allow players to work out on team accounts, but personal accounts are fine.

Enter Mary Dunn, a YSU senior, who is looking to get a medical redshirt after only playing in the first four games this past season.

She’s working from her western Pennsylvania home, busy preparing for the season.

Dunn had an idea of how to get everyone involved. YSU’s team released a video on YouTube. Dunn wrote team-specific lyrics to the 1985 tune of “We Are The World” to let fans, recruits and others know the Penguins were continuing to work during the pandemic, even though they couldn’t be with one another.

“I think we’re a little behind-the-scenes right now, but we are trying to put ourselves out there during this quarantine and make a name for YSU women’s basketball,” Dunn said. “Making sure everyone knows we’re still working really hard, and next season is going to be a great season regardless of when we’re all able to get back together.”

John Vogel, YSU’s Assistant Director of Athletic Communications, is the media liaison for the women’s basketball team. He said he helped edit Dunn’s video which was released on Friday.

Vogel bounced ideas off of Aulbach, Dunn and McKenah Peters, trying to get some feedback.

“The bottom line is they’re 18-22 year old females and I am not,” Vogel said. “For me to bounce a lot of ideas off of them just because a lot of social media is with recruiting.

“They’re way closer to the target age, gender than I am and (YSU head) coach (John) Barnes is. They have a much better idea what’s appealing to 15-18 year old females.”

There is the Instagram takeover in which Aulbach, Gabby Lupardus and Jen Wendler have had the account for a day to give a day-in-the-life perspective.

There’s been catching-up with players from the team, going through a simple question and answer session posted on the team’s website.

The end-of-season banquet award winners were posted throughout the week, along with cutting out an action picture of a player — leaving people to guess who is the YSU player. Vogel puts four possible answers below.

Then there’s TikTok, short-form video clips, which has taken off in the past year.

Dunn said she’s used workouts on the format to help her train.

“I’ve really got into the TikTok workouts that I see on there,” Dunn said. “They’re super hard. They’re good cardio. I have some weights in my garage, not a lot. I’m fortunate enough to have more resources than other people have now. I’m definitely utilizing them.”

Vogel said YSU athletics is in the process of creating a department-wide TikTok account after spring semester finals.

“There’s some value to it,” Vogel said. “Hopefully we’ll have some fun with it, with recruits and college-age students. We’re probably going to start with the YSU sports account. If we find that there’s some teams really good at it or really want to take off with it during the academic year, that’s a bridge we’ll cross.

“For right now, we’ll have a department account and hand it over to different teams whether it’s for a day, a week. If there’s a student-athlete that has a really good idea, we’ll hand it over to them or kind of repost. We’re in the planning stage.”

Peters, a telecommunications major, said she’s glad to see YSU women’s basketball accounts have been posting more during the quarantine to keep recruits and fans engaged.

“I’ve heard a lot of positive feedback from our social media platforms,” she said. “The Instagram takeovers allow people from the outside, especially recruits, to see what the life of a Division 1 athlete entails. It also gives anyone the opportunity to ask questions and get feedback from the athlete themselves.”

If nothing else, these social media engagements are brief distraction from the constant barrage of coverage of the COVID-19 pandemic.

“It’s definitely for our fans — the YSU community and YSU basketball community — to keep up with our players and feel apart of what they’re doing,” Barnes said. “It let’s them know how they’re handing this time at home. It definitely gives you an insight and kind of a unique perspective. We kind of get to know each player a little bit better spending the day with them.

The unexpected situation might have spurred a new direction for Aulbach.

She majors in business administration and plans to turn that into a marketing and sales major with communication. She loves using social media and talking to people.

Aulbach is on track to get her bachelor’s degree after her junior year and to get her master’s in her senior season. She’s looking to be a pharmaceutical sales representative and travel on the job as much as possible.

With all the dribbling skills and other helpful tips she’s provided to younger players online, coaching might be a possibility for Aulbach later, after her playing days are done.

“I was kind of thinking about that and thought that maybe would be just a really good thing for me to do because I do love basketball,” Aulbach said. “I don’t have dreams of playing professionally just because I want to start my professional job out of athletics right away. I think me being a coach could keep me involved with sports and athletics, but kind of get me more on the professional coaching side.