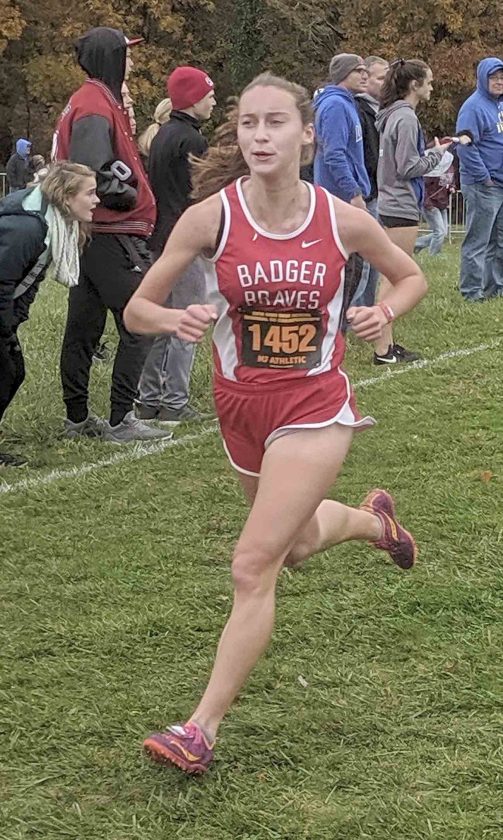 Staff file photo / John Vargo Miranda Stanhope of Badger runs in the regional meet last year at Boardman, trying to qualify for the state meet. The Ohio High School Athletic Association on Wednesday announced the state meet will move from the National Trail Raceway in Hebron to Fortress Obetz on the southeast side of Columbus.

The venue in Hebron has hosted the high school state cross country meet since 2011, after the Ohio High School Athletic Association deemed Scioto Downs, which hosted the meet from 1985 to 2010, not a viable course because it could not shut down its then-newly placed slot machines during the meet.

On Wednesday, the OHSAA announced the state cross country meet is moving to Fortress Obetz, a 50-acre multipurpose sports complex with a 6,500-seat grandstand located on the southeast side of Columbus.

The last couple of years at National Trail Raceway, the NHRA drag strip off a two-lane road, there were more complaints about it hosting the state meet, which draws more than 11,000 people each year, according to the OHSAA.

The 2018 state meet was delayed a week because of flooding that drowned out the course and a nearby grass parking area.

Boardman High School boys cross country coach John Phillips has had his share of competitors qualify for state, including 2013 Division I state champion Mark Hadley. This past year, senior Mitchel Dunham and junior Frank Bero qualified — placing in the top 35 in Division I.

“The experience at National Trail Raceway the last couple of years has been almost a letdown when you pull up to the venue,” Phillips said. “Last year, half the park was taken over by Christmas lights. The year before they had the flooding. It kind of took away from the experience.

“You compare it to Jesse Owens Stadium for track, there’s no comparison whatsoever. It almost felt like cross country was pushed to the side as far as a state experience goes. If you compare it to basketball, track, football, it was not as exciting as the regional to be quite honest.”

The OHSAA said most of the new course at Fortress Obetz will be visible from the 6,500-seat grandstands. The grandstand includes 1,100 flip-down seats, 2,000 bench-back seats and 3,400 bleacher seats.

“We can’t wait for our student-athletes and Ohio’s entire cross country community to experience the state championships at Fortress Obetz,” OHSAA Commissioner Jerry Snodgrass said in a news release. “This facility is so impressive, from the course layout for the competitors to being more spectator friendly for the fans, and we are thrilled to sign a five-year agreement. We would like to thank National Trail Raceway for hosting the state championships for the last nine years and doing an outstanding job as our host.”

District, regional and other cross country invitationals had the fans up close at those venues. The OHSAA hopes to put fans as close to the action with this new facility.

The OHSAA said Fortress Obetz was built to host sporting events, concerts, festivals and more. It was the home of the Ohio Machine professional lacrosse team from 2017 to 2019. The facility has five video boards, concessions, restrooms and a huge parking lot — on blacktop.

“State cross country removes the ability of the runners not to be interfered with, they’ve moved the crowd so much out of it,” Rupe said. “You can understand it both ways. I know that has been a challenge. People have been used to getting down close and encourage their runners. They feel like they’re part of things. State isn’t that way very much. It’ll be interesting if we’ll be able to let the fans see a lot more of what’s going on and feel a part of it — have the runners enjoy their families, and fans can see a little bit more of it so there’s not such a separation between the participants and the fans.

“Hopefully, we can move in that direction to an extent. I know a lot of people will appreciate it if that what comes out of it.”

It likely won’t have the feel of Scioto Downs where runners would come over a ridge from the outside of the racetrack and feel the reverberation of the fans cheering from the concrete stands as they would finish the race on the grassy part of the infield.

“It was incredible there — the roar of the crowd when people entered the infield,” Grisdale said. “I don’t think any place could ever quite replicate that (the metal roof helped echo all of the noise), but this sure seems like it could come close.”