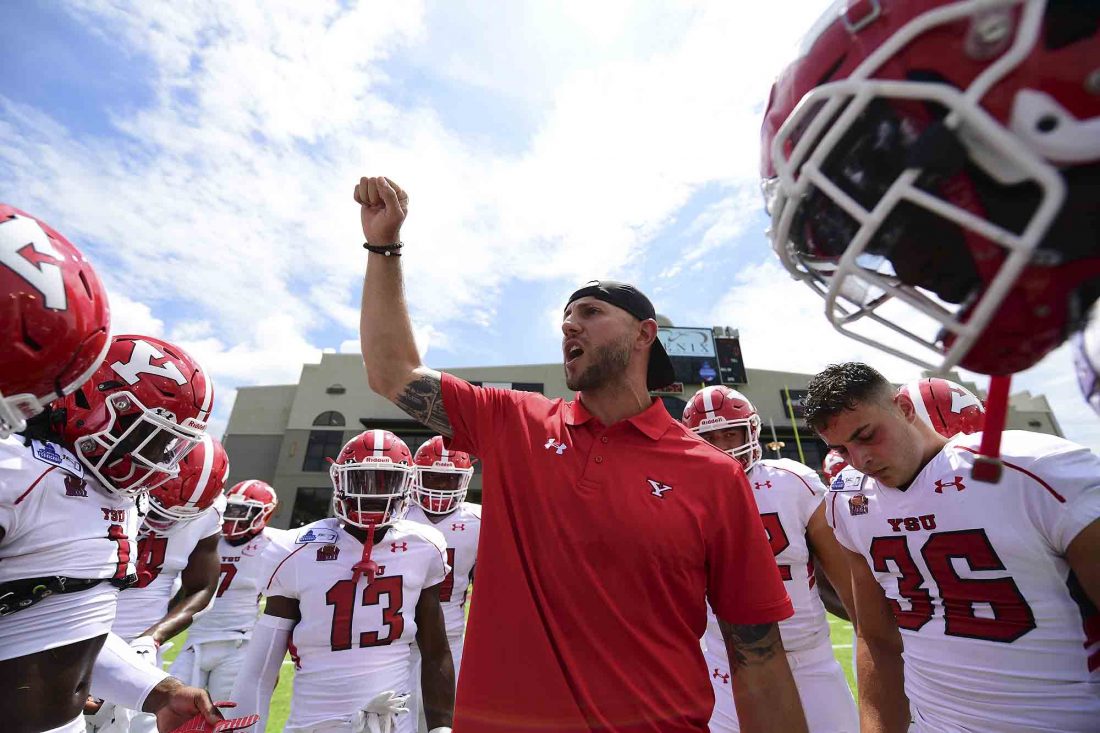 Following the news every day has become a little overwhelming lately for Terry Grossetti — and probably a lot of other people.

Grossetti admits the coverage of the current coronavirus pandemic is important, but an overload of information starts to take a toll on the Youngstown State University football strength and conditioning coordinator. To decompress from all the negativity, the 34-year-old works out.

“There’s a lot of stuff going on in the world, and it could be pretty taxing on your mind if you pay attention to the news every day,” he said. “So, ramping up your training’s intensity could actually help you.”

For those athletes who have already been ramping things up for weeks, however, Grossetti said it’s also important to let the body rest and recuperate.

Grossetti and fellow strength and conditioning coordinators Reuben Green III (Morgan State University) and Tarik Muse (Mercer University) continue to offer their suggestions on how to properly train in the fourth and final part of a series aimed toward helping athletes stay in shape during Ohio’s stay-at-home order.

Taking time off hasn’t been much of a problem for most high school athletes lately, but others may have access to weights and exercise machines or found ways to train at home. If the rigors of workouts have an athlete feeling overly sore or run down, it can be helpful to decrease the intensity and find other ways to improve.

“It’s important to focus on things you’re not good at,” Grossetti said. “I told our players that (recently). This is a good time to reflect on your season, look back and watch the film from last year… see what you really need to work on, then write those things down.”

If athletes aren’t stimulating their brains, they can still initiate their muscles as all three strength coaches agreed down time doesn’t mean time off.

Even if the body is sore, they said it’s important to stay active, just in a less intense manner. Muse, a 2014 Liberty High School graduate, said just sitting or laying around could have a negative effect. He suggested going for a walk, a short jog or doing a light lifting session.

“Basically, on those off days, you don’t want to just lay in bed all day because when you come in for the next training session, you’ll feel tight or sore,” Muse said. “You don’t need to necessarily take a true off day. You want to get your heart rate up a little bit, get a good sweat going, maybe do a warm-up, something like that.”

Another area the coordinators agreed on was the benefits of yoga.

While they discouraged long stretches before working out, they suggested doing yoga afterward or during a day with a light workload. The slower workout involves focusing on breathing and different poses that can stretch and activate muscles and joints, and yoga is often overlooked by athletes, Muse said.

The smart ones make sure to incorporate it.

“Yoga is very beneficial,” he said. “It helps with recovery and for mobility purposes. You’re not able to recover if you’re not mobile, and then you may not be able to perform like you want to in the weight room or in your sport.”

Green is a big proponent of the slow-moving exercises.

The 2012 YSU graduate (an exercise science major) said there are a lot of attributes athletes may not realize that can come from focusing more on the movement than the amount of weight or number of repetitions they’re doing.

A shorter or less intense workout is a great time to practice those motions, he said.

“When they slow down, they’re able to work on their technique, work on getting stronger in the movement and in different phases of the movement — going down and up,” Green said. “On top of that, when you go through so many repetitions, that movement pattern just gets ingrained in your mind to where it’s kind of hard to forget it.

“… That’s what I would tell a lot of the high school kids, and even tell some of my (college) athletes, this is a great time to just really focus on the movement and how you feel in performing everything.”

The veteran trainers also emphasized that an “off day” should not turn into a day to eat their weight in food.

Proper nutrition is a major component to staying in shape and building muscle, Grossetti said. He added that it’s about more than what they eat, but what they drink as well. Avoiding pop, iced tea, coffee and many juices can help keep athletes better hydrated and performing at a higher level.

“That’s one thing we can control more than anything,” Grossetti said of nutrition. “We can’t control the equipment that we have, but we can focus on eating healthy. It’s harder because you can’t leave your house. For me personally, it’s tough to eat healthy during this time because you have so many snacks laying around. You can really test your discipline.”