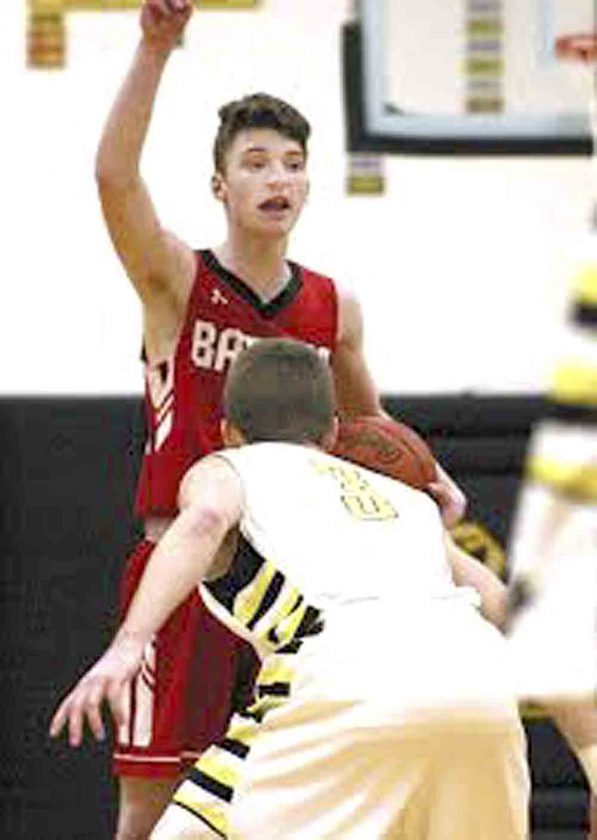 When a coach sees potential in a player, they can tend to be harder on that player. Badger senior Logan Lendak showed potential early and Braves coach Joshua Upshire made sure Lendak was able to live up to those expectations.

“I probably rode Logan harder than I rode even Aidan (Miller) or (Logan) Popovich or anyone else over those four years,” Upshire said. “I rode him, rode him, rode him and every time he’d just look at me, kind of shake his head, say ‘Okay, I got it’ and he’d carry on.”

That attitude helped Lendak when he came to the realization as he began his senior season with the Braves that he needed to step it up if he wanted to reach the dream he had for himself.

Going into the senior night contest Feb. 18 against Maplewood, Lendak needed 11 points to reach the 1,000-point mark. After sinking a shot he’s made time after time, Lendak reached the milestone he had been chasing for as long as he could remember.

“There’s a lot of emotion,” Lendak said. “I was happy I could finally get it. It was something I wanted to do as long as I can remember … At the start of the year I was thinking that I might not get it, but coming down the stretch I put together a few good games and it definitely felt like a huge relief (to score 1,000).”

Lendak stepped on the court in a Braves uniform for the last time in a sectional bracket final on Feb. 28 against Windham. Looking back on his time with Badger, one of his fondest memories was an upset victory his sophomore year against Grand Valley with a short bench.

“It was fun for four years,” he said. “I had great teammates and a great coaching staff. I wouldn’t want to have played for any other school.”

Instead of going to college to continue playing, Lendak is opting to go to trade school to become an electrician. When job security is an issue the way it is, Lendak found that taking up a trade would be the best way to guarantee a job down the line.

“I feel like it’s the career path for me that would best fit me in the long run,” he said. “I would love to play in college, but I just feel like I want to start looking at my life now. I feel like with my skill set, there’s nothing in college for me, so I feel like the trade route is better for me personally.”

This doesn’t mean his time with basketball is done however. Upshire has had discussions with Lendak and sees the potential for Lendak to join the coaching ranks one day down the road.

“You just see those kids that just understand it,” Upshire said. “We don’t know what it is, but you can understand it, they get it, and that someday they’d be a really good coach. We’ve been talking and wanted to see what he’d do with his career and told him that if he ever wanted to be a part of the program we’d be happy to have him around.”

The two have a strong bond that extends beyond the court.

“He’s been my coach for all of high school, he came in when I was a freshman,” Lendak said. “My relationship with him is outside of basketball as well. We text each other all the time how we’re doing, and his kid is just awesome. I just love him and his family.”

That connection all started from the riding that took place between a first-year coach and a first-year player.

“He’s been a huge inspiration toward me,” Lendak said. “He’s always pushed me and told me that I could do better than what I was. He saw my full potential, I just had to work hard to reach it because my main weakness was giving 100 percent all the time.

“He just found a way to find it within me and pushed me as hard as he could and I’m glad he was there for me.”