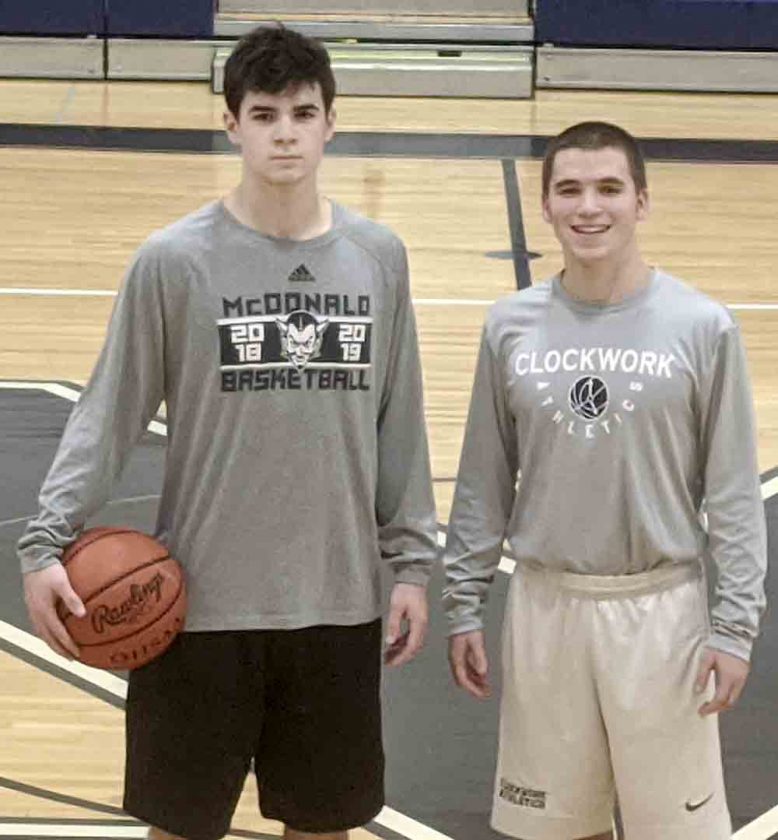 McDONALD — Zach Rasile stands at the foul line facing one of the baskets in the McDonald gymnasium.

It’s a Thursday afternoon and a local TV crew is setting up for a live broadcast of the McDonald girls basketball team against Western Reserve.

A 6-foot senior guard for the Blue Devils, Rasile takes the ball in his hands as Anthony Pugh rebounds for him. Pugh is a former standout Blue Devils backcourt player.

Dribble, dribble, bend the knees, raise the arms with basketball in hand, flip the wrist, watch the ball go through the basket — the routine remains steadfast.

During games, he does the same. The noise doesn’t even affect the fourth-highest scorer in Ohio high school boys basketball history.

“I just take a deep breath, just rely on my training,” said Rasile, who has 2,751 points in his Blue Devil career. “I take up so many shots, it’s really what it comes down to.”

Pugh, who runs Clockwork Athletics, a basketball skill development company, said there’s plenty of attention to detail. The two have been working together since the end of Rasile’s freshman year. Then, the McDonald senior year was an elite-level standstill shooter, a significant threat from 3-point range.

But Rasile’s game had to develop. The two worked off the dribble, perfecting pull-up jumpers and floaters. Rasile shoots 75 to 100 floaters before their workouts.

“If you saw the repetition and all the work he put in on that shot, you would know why he’s good at it,” Pugh said. “When we started working together, it was about developing his overall game. We knew what he was good at. We wanted to tweak what he wasn’t great at yet.”

Rasile, who has committed to West Liberty University next season, has honed his skills to be more than just the best 3-point shooter in Ohio high school history.

“Some players nowadays they don’t shoot it,” Rasile said about the mid-range jump shot. “If I can shoot it at a high rate, it’s an effective shot. That’s something we’ve worked on in the past.”

The two go once a week during the season and try to pick up another day if it’s available. In the summer, it becomes three to five days.

Yes, it can be exhausting.

“In the summer we go pretty hard,” Rasile said. “We do some conditioning. It does suck a little bit. I have fun with it. It’s what I like to do.”

There are some out there saying the McDonald senior shoots a lot of shots during games.

“If he was on your team, how many times would he shoot?,” Pugh said. “If he was on my team, he would be shooting more than he does currently. You’re going to have that because that’s the way the world is unfortunately. I would think of his caliber he is, I don’t see anything wrong with the amount of shots he takes. I’d encourage him to shoot a little bit more.

“Without a doubt, I might be biased because I work with him. I think he’s one of the best players in the state of Ohio. He should definitely be up there for consideration for the Mr. Basketball award if it were up to me. He doesn’t really care.”

Pugh would like you to know how much Rasile cares about his performance on the floor.

Cavs may part with Beilein

CLEVELAND — John Beilein has admitted that losing NBA games has hit him hard. Maybe too hard. The 67-year-old ...

So, there’s a chance?

GOODYEAR, Arizona — For now, Francisco Lindor isn’t going anywhere. And, if he had his way, he’d never leave ...

BEAVER TOWNSHIP — If he isn’t the busiest college president in the state of Ohio, then YSU President Jim ...

PITTSBURGH — Patric Hornqvist had two goals and an assist and the Pittsburgh Penguins defeated the Detroit Red ...

BRADENTON, Fla. — The son’s stay in town has outlasted the father’s. The irony isn’t lost on Jacob ...