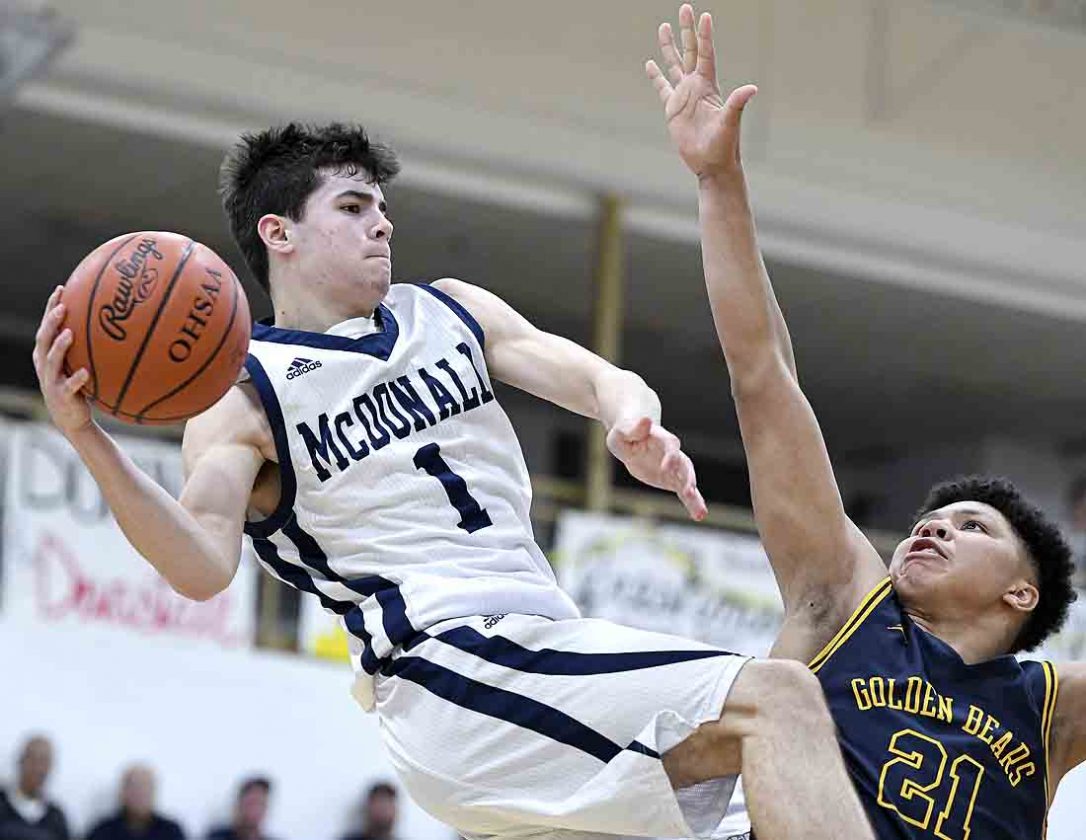 Correspondent photo / Robert Hayes Zach Rasile (1) of McDonald jumps to save the ball from going out of bounds as Raymond Hammond (21) of East defends Tuesday night in the Blue Devils’ 75-62 win over the Golden Bears at McDonald.

McDONALD — The regular season is winding down and the postseason bracket is set, but the McDonald Blue Devils have a few more opportunities to tune up before the tournament begins.

Tuesday evening’s matchup against Division II East looked to be a good way to prepare for the road ahead.

Prolific scorer Zach Rasile made a statement by putting up 41 points against the Golden Bears as a hot start helped McDonald cruise to a 75-62 victory. Rasile, the fourth-leading scorer in Ohio high school basketball history with 2,792 points, is 166 points away from third place. Former Ohio State University player Jay Burson, who played for New Concord John Glenn High School, had 2,958 points from 1981-85.

“When the schedule came out and they were on our schedule, it was kind of late scheduled game because we had an opening,” McDonald coach Jeff Rasile said. “We were thrilled to have them here and coach (Kevin Cylar) does a great job with them.

“It’s just another game and another grind. It’s another look, a different tactical look, so just thrilled to get a victory.” 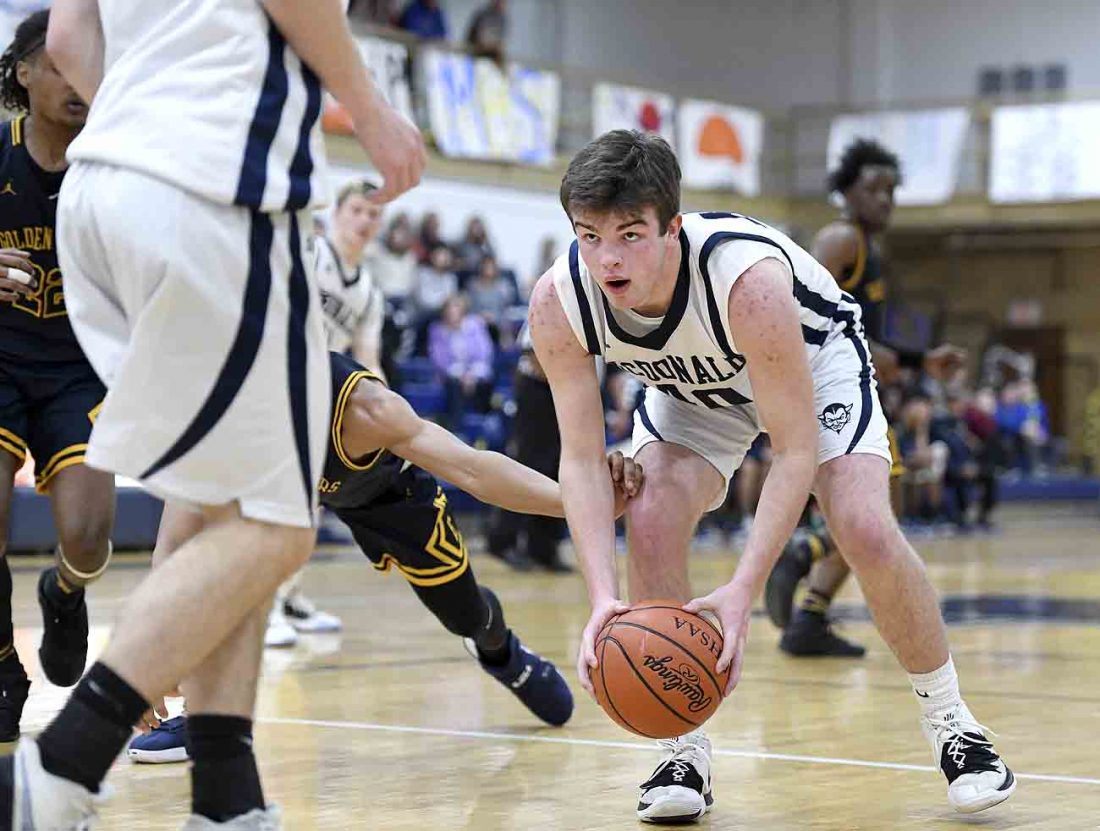 The Blue Devils jumped on East early, starting the contest on an 11-0 run and holding a 22-12 lead after the first quarter.

Zach Rasile had 13 of McDonald’s 22 points, and he felt that playing with an early lead was key.

“Well I think we get some momentum, so it kind of carries us through the rest of the game,” he said. “Usually we really don’t jump on teams like that, so that was nice to see for us — especially heading into the tournament.”

He went up to the charity stripe 21 times during the game and knocked down 17 of those attempts. Jeff Rasile said the early lead helped Zach have better looks throughout the evening.

“What Zach did is he grinded,” Jeff Rasile said. “Because he started off hot, we were able to back door him several times. He got to the free-throw line, so that was big. 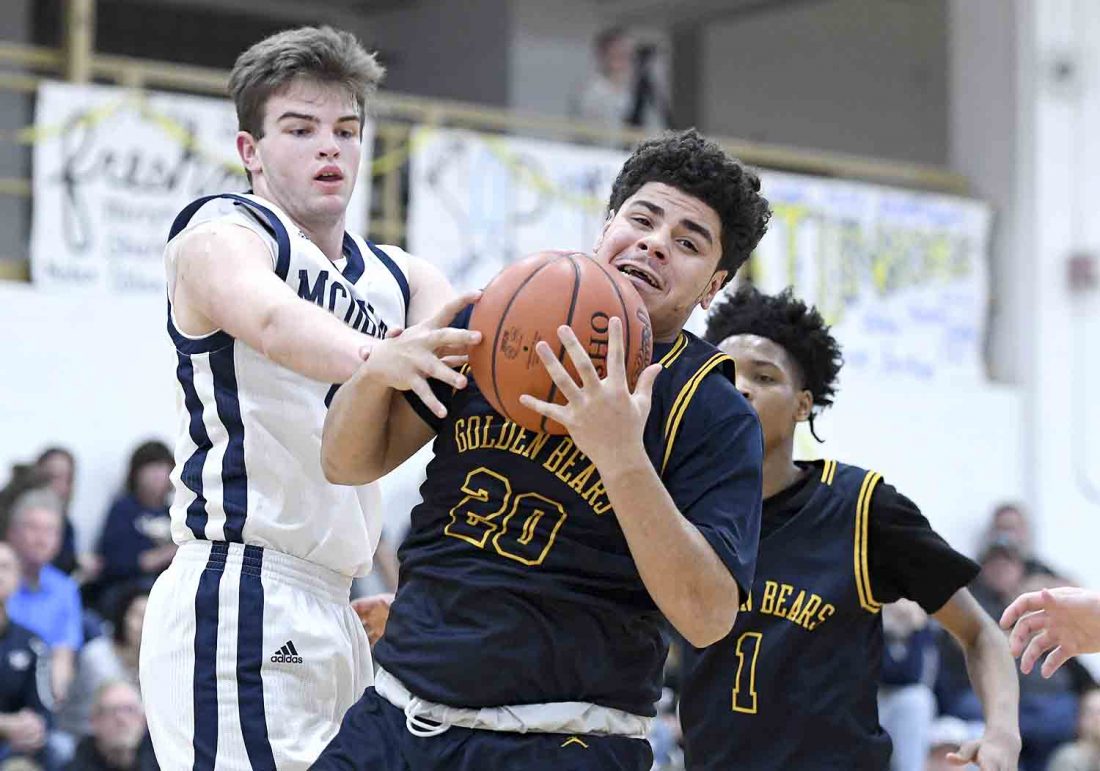 “He does his thing, at times I wish he would shoot a little more. I mean I was on him, you got to attack, you got to attack. He’s always going to make the right basketball play and you can’t ask for much more than that.”

Meanwhile, East falls to 5-15, but coach Kevin Cylar is looking forward to its Division II Boardman District sectional first-round game at Girard in a few weeks and has a lot of respect toward the Indians.

For his team, preparation will be key going into the postseason.

“You go hard in practice and you try to kind of duplicate what you’re going to see out there,” Cylar said.

“I’m sure Girard is a proud community and they’re going to come out fighting. So, what we have to do is make sure our reserve guys and our younger guys come out there and compete and have them prepared to go to war.”

John Clay led East with 15 points and was followed by Terry Hopkins with 14. Ramere Bledsoe chalked up 10.

McDonald (17-3) is a the first seed in the Division IV Struthers District and plays either Jackson-Milton or Heartland Christian at home in a sectional bracket final.

“There’s no easy games when you get to the tournament. One bad quarter could ruin your season,” Jeff Rasile said “We’ve played both teams. They’re going to come with a different strategy next time around.”

Zach Rasile feels there are still things to clean up.

“I think we can shoot the ball a little bit better across the board,” he said “I think we just need our confidence back. Otherwise, I think we’re playing hard. We’ll just keep taking it one game at a time.”