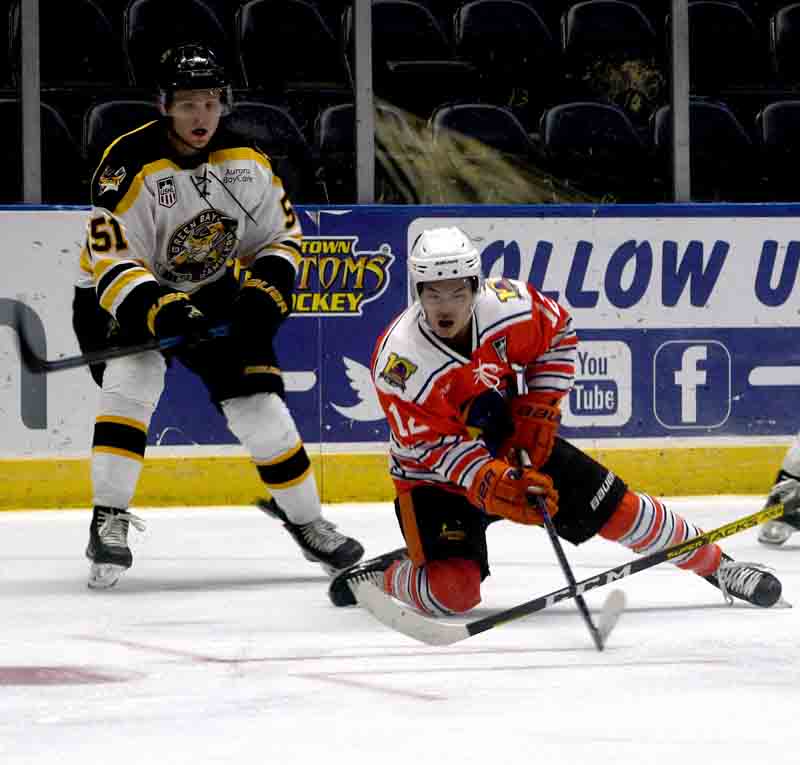 Staff photo / Brian Yauger Yusaku Ando falls to the ground while firing a pass to a teammate while Nicholas Pertrulo (51) tries to break it up. 3662: Youngstown Phantoms forward Jan Kern uses his stick to hold off Green Bay forward Camden Thiesing in pursuit of the puck.

Staff photo / Brian Yauger Yusaku Ando falls to the ground while firing a pass to a teammate while Nicholas Pertrulo (51) tries to break it up. 3662: Youngstown Phantoms forward Jan Kern uses his stick to hold off Green Bay forward Camden Thiesing in pursuit of the puck.

YOUNGSTOWN — Going into the third period, neither team had scored.

It looked like the first team to score a goal would score the win as well. Midway into the period, that team was Green Bay as the Gamblers scored three times in a 9-minute span to beat the Youngstown Phantoms, 3-0.

“It’s a one-goal game to me,” Phantoms coach Brad Patterson said. “They get one in the third that took a little energy out of our sails. I think the frustrating part you can look at chances for and chances against, and I think we generated a lot of chances for through the first 30-35 minutes, and for whatever reason, we didn’t finish.”

Despite not scoring, the Phantoms had no issues getting shots on net. Over the course of the game, the Phantoms sent 32 shots the way of Gamblers goaltender Gavin Enright, but Enright was able to shut them down.

Just over a minute into the game, the Phantoms had a golden opportunity to get the lead. John Beaton had a wide-open net and fired, but one of the Green Bay defensemen hit the ice just in time to stop the shot. 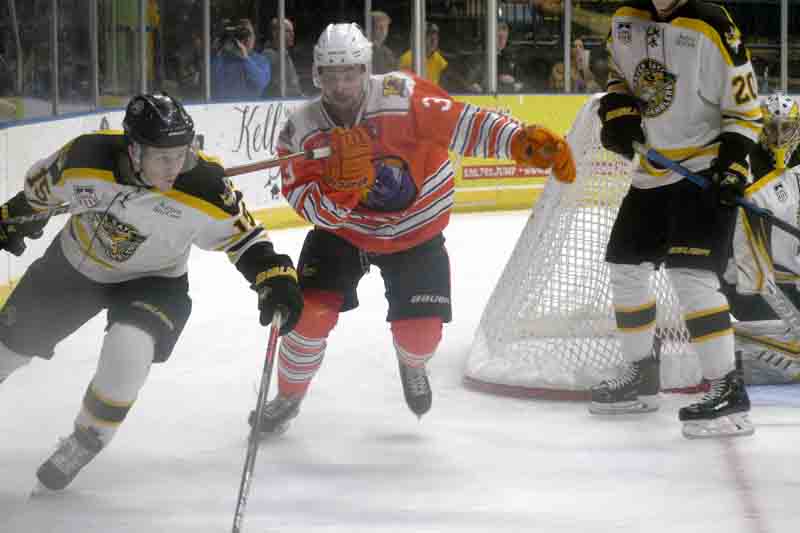 The second period was the same. Both teams traded chances, but neither team gave up any ground. The Phantoms spent most of the second period in the attacking zone but were unable to convert. Early in the game, despite the lack of scoring, Patterson liked what he saw.

“I thought probably in the first 30 minutes we were playing downhill, I liked our game,” he said. “I liked our offensive output apart from goals scored, I’m talking about chances for. Defensively, I liked what we were doing. As the game wore on, we gave up more than what we did in the first 40 minutes. Not to say we gave up a ton, but it was one of those games where one goal was going to be a big swing.”

Green Bay defenseman Dylan Moulton was that big swing, as 8 minutes into the third period, Moulton beat Phantoms goaltender Dominic Basse to give the Gamblers the edge.

With 4 minutes remaining, the Gamblers scored a controversial goal. A shot from Chad Hillebrand made it to Basse and the goal judge turned the light on. Basse protested, saying the puck didn’t cross the line. After a discussion between the referees and goal judge, there was no clear evidence one way or the other, so the ruling of a goal was upheld, and the Phantoms went down 2-0.

As the referee signaled that the goal was upheld, the energy was sucked out of the arena.

Less than 1 minute later, the Gamblers scored again, making it 3-0.

The Phantoms ended the weekend with zero even strength goals, which is something that can’t keep up if they want to have success, according to Patterson.

“We talked about this weekend being playoff hockey,” he said. “You don’t play three games back-to-back and you can’t get stuff done five-on-five, it’s going to be a struggle to pull points. I thought tonight we had some good looks, hit a couple posts, (and) ultimately it doesn’t go in. It’s tough.”

The Phantoms look to rebound with a two-game road series against the Cedar Rapids RoughRiders. Then they travel to Dubuque for another two-game series. The Phantoms return to Youngstown Feb. 14, when they’ll host the Muskegon Lumberjacks.