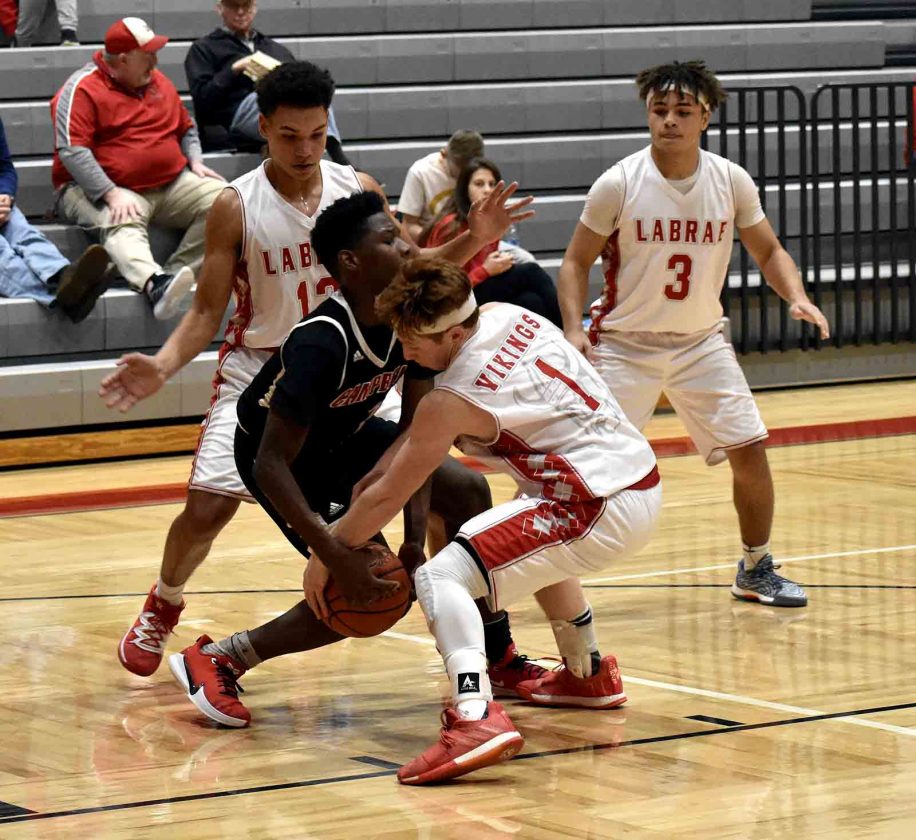 Staff photo / Brad Emerine LaBrae’s Devin Carter, right, comes to a jump-stop before feeding Landon Kiser for a layup during the second half.

LEAVITTSBURG — Coming off its biggest win of the season last Friday, the LaBrae High School boys basketball team needed an early wake-up call in order to get back to work against Campbell on Tuesday night.

The Vikings trailed by nine points in the first quarter, but responded in a big way to lead 40-28 at halftime en route to a 67-53 victory over the Rebels.

The contest was far from the excitement created during a 47-45 home win over Newton Falls in a contest of the top teams in the Blue Tier of the All-American Conference last Friday in front of a strong home throng. The Vikings moved to 12-3 overall and are 7-1 in the league, tied with Newton Falls.

The sparse crowd and listless play by the Vikings early on may have been a matter of not being hungry to face an opponent like Campbell, which dropped to 4-12 overall and 1-7 in league play.

“I’m not sure if it was us not coming out excited to play after the big win over Newton Falls or whether (Campbell) just caught us off guard a bit,” Vikings coach Chad Kiser said. “But one thing’s certain: We did not play well in that first quarter. 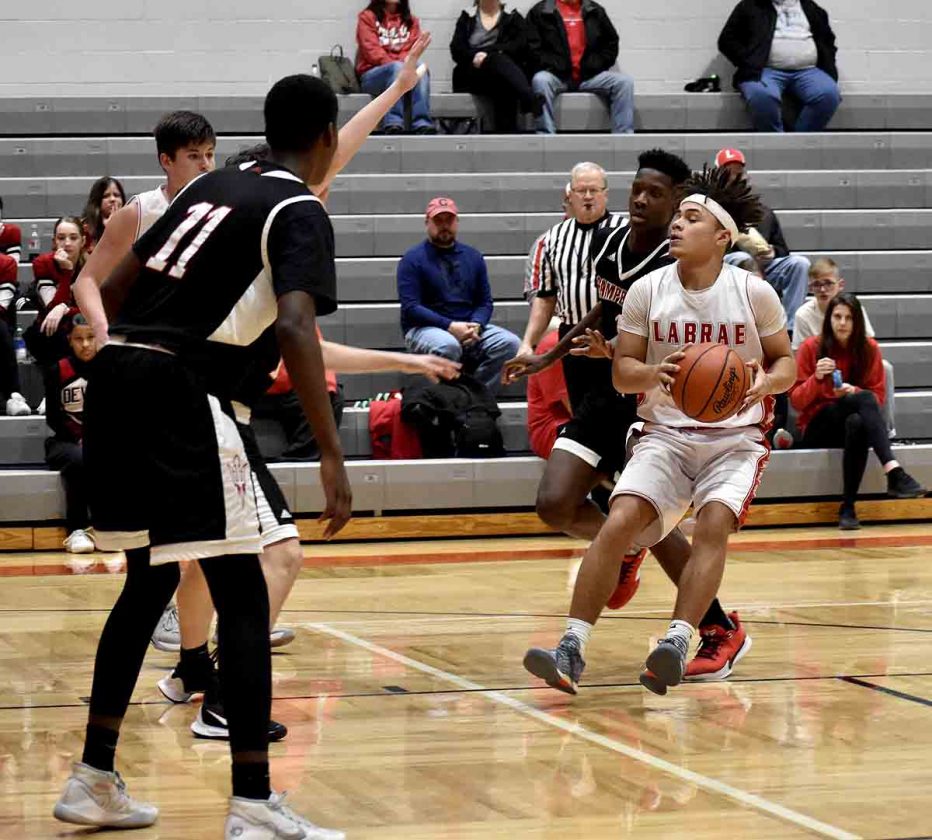 Staff photo / Brad Emerine LaBrae’s Devin Carter, right, comes to a jump-stop before feeding Landon Kiser for a layup during the second half.

“We went into the game trying to keep (Campbell) from driving because that was our weakness against Falls. We set up in a zone and they just shot us out of it. That Kevin Moore made four 3-pointers in the first quarter so we changed things up in the second quarter.”

Campbell’s Kevin Moore is a sophomore guard who finished with 23 points. His brother, sophomore Kayvon Moore, finished with 15 points. In fact, looking at the scoring sheet in the first half could have reminded one of a pop music hit by the Andrea True Connection back in 1976 — “More, more, more” — as the brothers combined for 22 points.

“When we were making shots, we were getting back and setting up our zone and that limited (LaBrae’s) transition. They’re pretty good in transition,” said Campbell coach Nick Canterino, whose team led 12-3 and 15-6 in the first quarter before settling for a 20-17 lead entering the second quarter. “We got some good looks and we were making them.

“But (LaBrae) threw a wrinkle at us. They started trapping and we didn’t expect it and it showed. We had a ton of turnovers and they turned them into points very quick.”

The Vikings’ second-quarter option, full-court pressure and trap defenses, proved to be the difference.

“We were fortunate that Devin Carter played such a great game,” Kiser said. “He made three 3s in the first quarter when we were struggling. He kept us in it actually. In the second quarter, we got a lot of transition points because we caught (Campbell) off guard and really pressured the ball and that led to a bunch of steals and layups for us.”

Connor Meyer, Landon Kiser and Aidan Stephens all contributed seven points as part of LaBrae’s 23-8 second-quarter advantage. Meyer finished with a team-best 18 points, while Stephens and Kiser, the coach’s nephew, both provided 15 points.

“We have some scoring balance and that allows us to take advantage of opponent’s defenses,” coach Kiser said. “Once everyone got into the flow, we played pretty well for over two quarters until it got sloppy in the final part of the fourth quarter. It was a bit of a wake-up call early and it shows the kids that they have to remain focused for an entire game, every game, if they want to be a good team and reach their goals.”

LaBrae led 53-41 entering the fourth quarter and stretched the gap to 65-44 with around 3 minutes remaining.

In addition to the Moore brothers, the Red Devils start a freshman, Dallas VanCobb, and a pair of juniors in Collin Michaels and Gabe Brunn. VanCobb chipped in seven points.

“Kayvon is one of the most athletic kids in the league and he rebounds well. His offense is coming along. Kevin can be one of the best players in the area, and he’s playing out of position. He’s not a normal point guard, but we’re forced to use him there right now. We’d like him to be off the ball more, but we can’t do that right now.