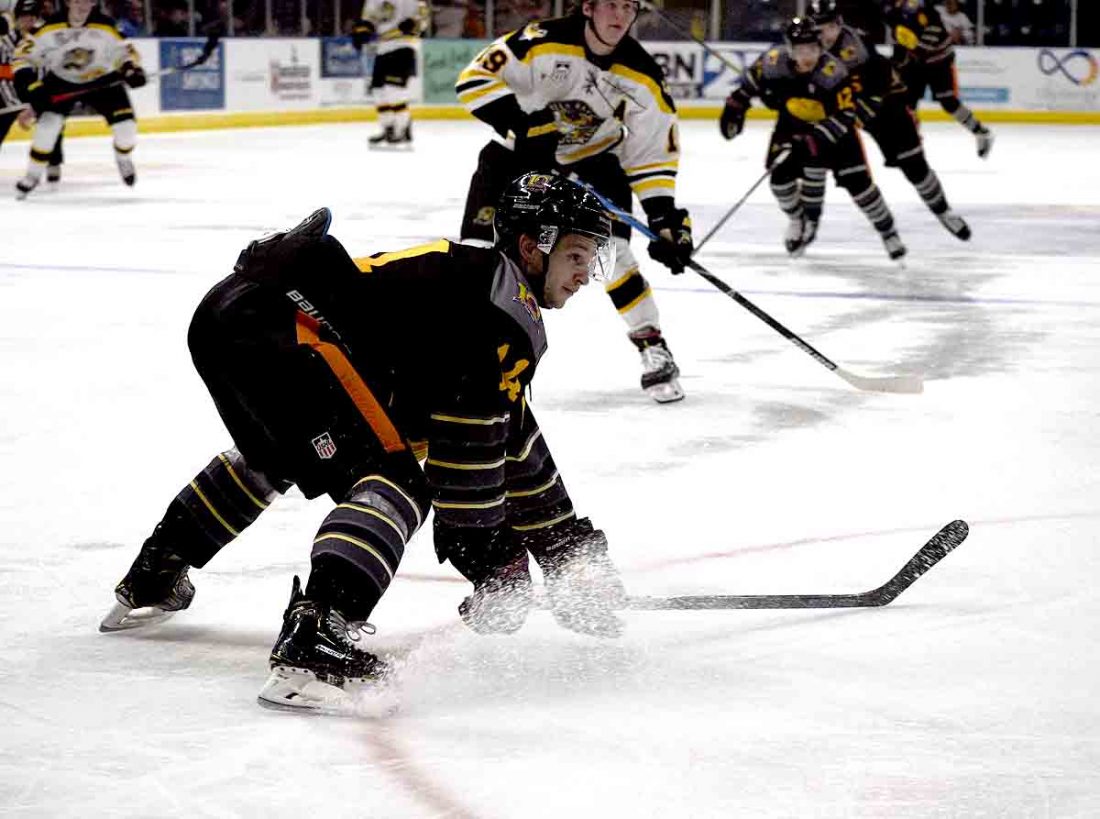 Staff photo / Brian Yauger Phantoms defender Caleb Price dives to the ice to try to block a Green Bay shot that went in for a goal.

YOUNGSTOWN — On Pucks and Paws night, the Youngstown Phantoms had a doggone tough time in a 4-2 setback to the Green Bay Gamblers Saturday night at the Covelli Centre.

“It was a tight game,” Phantoms coach Brad Patterson said. “I think they came out with some energy and some fire last night and I think we matched it early. I felt like there’s a couple times where we played on our heels and got away from it and credit to them, they stayed on their toes.”

Green Bay goaltender Nicholas Grabko made multiple great saves that deflated any momentum the Phantoms had gained, including a stellar grab when Youngstown’s Ben Schoen was an inch away from a score in the second period.

“I thought he was great,” Patterson said. “He made some big stops early in the game. I thought he made a couple tremendous ones in the first five or six minutes. In the third it was 3-2, we really put a push on and had a couple netfront chances. He competed and he earned it.”

At the midway point of the first period, Green Bay got on the board with a goal from Detroit Red Wings draft pick, Ryan O’Reilly.

Early in the second, Aidan Gallacher fired a slap shot from behind the faceoff circle that sailed right into the net to tie the score. That momentum didn’t last long as the Gamblers scored twice in a 5-minute span to lead 3-1.

In the closing minutes of the second period, Gallacher fired a shot from the same spot, and it was tipped in by Matthew Cassidy to bring the Phantoms within a goal.

All five goals by the Phantoms so far during this three-game series have come from the power play.

“I think our power play is clicking,” Patterson said. “Today, yesterday, we don’t score an even-strength goal. You have to get hard areas to score those, and I felt like we didn’t and that’s an area we need to adjust.”

Midway through the third, Green Bay forward Cam Theising got a bounce and drove down to score to make it 4-2. With goalkeeper Dominic Basse on the bench to give the team a sixth skater, the Phantoms fired a flurry of shots to try and pull back in the game but couldn’t.

“I think they played an extremely good game,” Patterson said. “They were up-tempo and continuously putting pucks in a spot so they could recover them and credit to them. They did that and they had their work boots on tonight. I think they deserved the breaks that they got.”

The two teams square off once more tonight. This is the only time this season where the Phantoms (15-16-4-1, 35 points) will play three games in three days against the same team.

“We went into this weekend thinking of it as a playoff series,” Patterson said. “We get the first one they get the second one. Two tight teams that are neck-and-neck. It doesn’t shock me that we’re going to game three.”