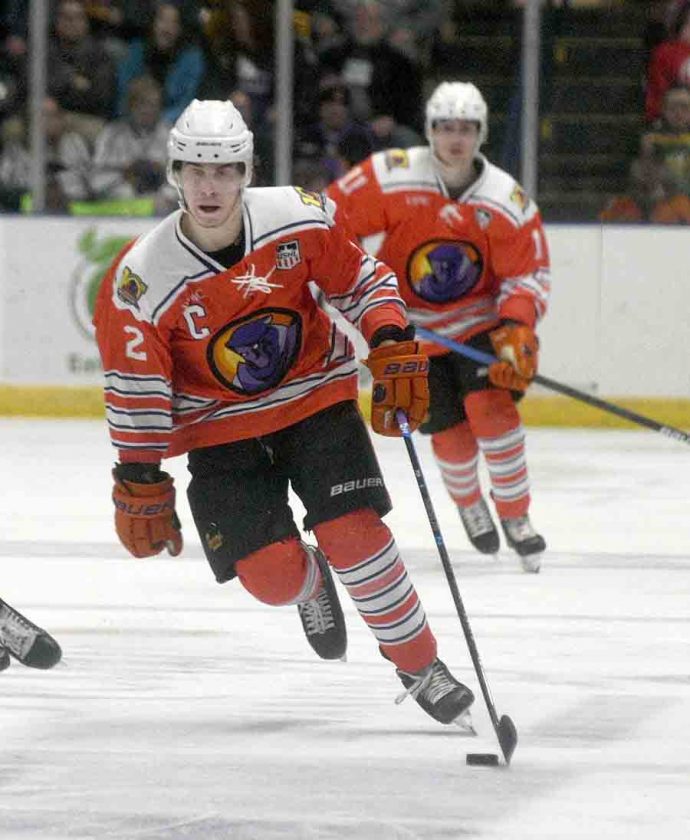 Staff photo / Brian Yauger Aiden Gallacher of the Phantoms carries the puck down the ice on Saturday.

His players heard the message loud and clear as the Phantoms rallied back from a 2-0 deficit to pull out a 5-3 victory.

“I thought the little things that we talked about last night, that I thought we were extremely poor, I thought we were much better,” Patterson said. “I felt like numerous times we’d let guys get off the hook and play in open ice last night, didn’t get our noses above pucks and were content to swing it open. Tonight we didn’t.”

The first period ended with the Phantoms in a 2-0 hole. It seemed like there may be a repeat of the night prior, but Patterson saw how much better his team was playing.

“Looking at our first period I really liked it,” he said. “Last night, that wouldn’t have been the case, but tonight I felt like we played with energy.” 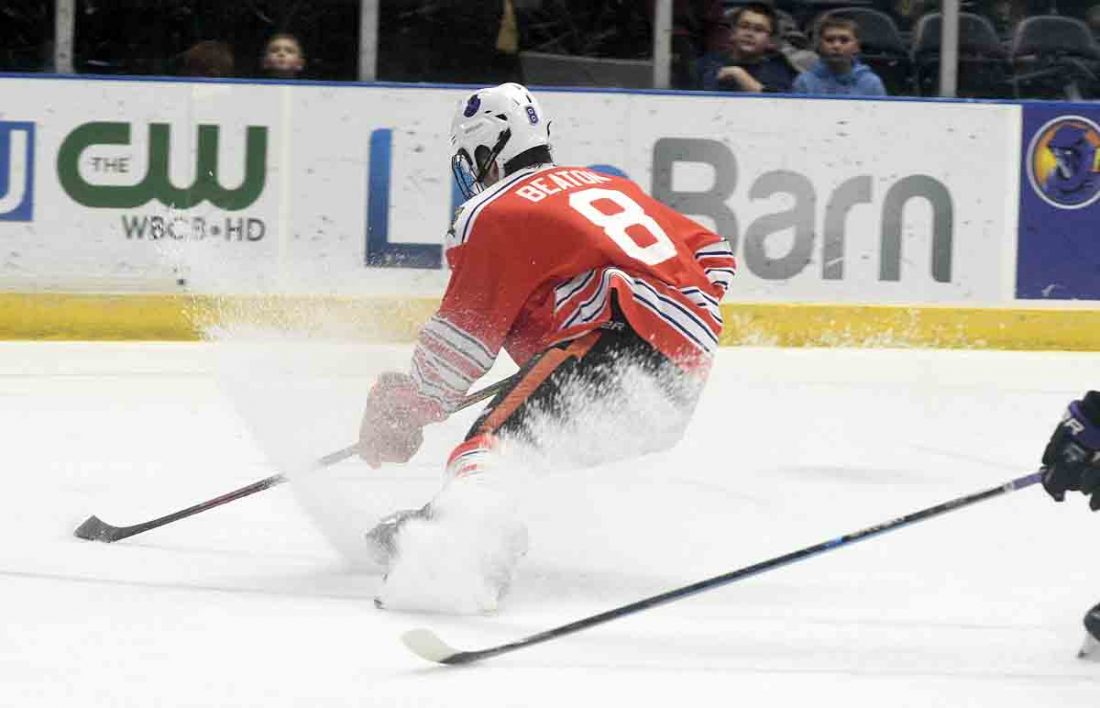 Staff photo / Brian Yauger Youngstown’s John Beaton (8) turns to make a pass to Matthew Cassidy who then scored to tie the game 2-2 during the Phantoms’ 5-3 win Saturday night at the Covelli Centre.

That energy began to translate to goals as Yusaku Ando got the Phantoms on the board with his seventh goal of the season.

Later on in the period, Matthew Cassidy hammered a pass from John Beaton past Tri-City goaltender Ryan Ouellette for a shorthanded goal to tie the game.

With momentum going the Phantoms’ way, all they had to do now was get the lead. That happened just under two minutes later, as Georgi Merkulov scored the go-ahead goal.

The Storm’s hero on Friday, Mitchell Miller tied the game with six minutes left in the game on a power play goal.

Keeping the game from going to overtime was Josh DeLuca. DeLuca snuck the puck past Ouellette to score the game-winner, a reward for his tough play according to Patterson.

“He deserves that,” Patterson said. “He plays those hard area and those hard minutes and never gets the praise that he should. Josh has got a great skill set to him as well and it’s exciting. Our bench was pretty excited when he scored.”

Defenseman Aiden Gallacher was named as the team’s captain Friday and was finally able to celebrate. Gallacher put the icing on the Phantoms’ cake, scoring the empty-net goal to seal the deal.

The decision to give Gallacher a letter was an easy one for Patterson. According to him, Gallacher, along with Trevor Kuntar, are role models on and off the ice.

“Aiden and Trevor have been wearing letters for us all year and both of those guys have been awesome,” Patterson said. “They’re everyday guys. Away from the rink you see them off working with youth hockey doing the little things.”

Also on the backend is new acquisition Caleb Price. Price was brought over from Lincoln in a trade. With Jayson Dobay out with an injury, Price was asked to step up and take on some heavy minutes.

Patterson thinks Price has steadily improved the longer he spends with the team.

“I think he’s got better every game and I thought he was pretty good coming in for that first weekend,” Patterson said. “It’s a tough thing to do to jump into a routine. He’s not only jumped in, but he’s playing key minutes for us.”

Next up, the Phantoms have three games in three nights as they welcome the Green Bay Gamblers to Youngstown. The first game is set for Friday at 7:05.