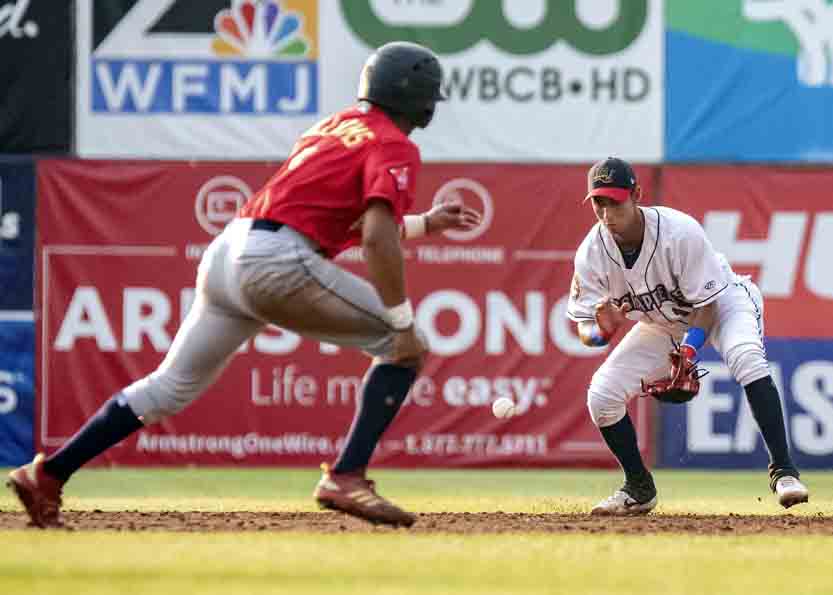 Special to the Tribune | Dianna Oatridge Mahoning Valley's Brayan Rocchio (11) fields a ground ball, forcing State College's Donivan Williams back to second base during their game at Eastwood Field on Thursday.

NILES — In front of their largest crowd of the season, the Scrappers fell victim to some perfectly placed baseballs — losing to State College, 7-1.

The game had a poor start for the Scrappers and didn’t get much better. The Spikes’ placement was just out of the infielders’ reach, getting four hits and ending the top of the first with a 2-0 lead.

“The first inning was a little difficult for us to play defense,” Scrappers manager Dennis Malave said. “They didn’t give us too many opportunities to make plays. Just some good hits for them and that put the game moving forward for them. We got down two and the tempo of the game was slow on our part.”

Offense came at a premium for the Scrappers, getting four hits in the first four innings.

The Scrappers bats might have been cold, but they weren’t completely frozen. Bryan Lavastida, Ray Delgado and Johnathan Rodriguez each collected two hits on the night. 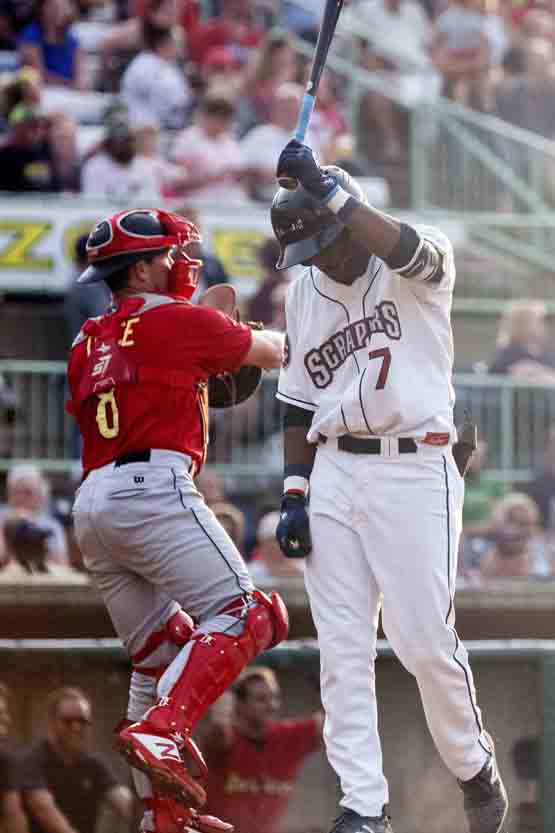 Special to the Tribune | Dianna Oatridge Mahoning Valley's Korey Holland (7) heads to the dugout in front of State College catcher Matt Duce (8) after striking out during their game at Eastwood Field on Thursday.

Despite winding up with seven hits, the Scrappers scored once in the bottom of the fourth inning. Rodriguez doubled on a fly ball to center, which would score Delgado.

In the top of the fifth, Spikes catcher Matt Duce hit a solo home run to right center field to extend their lead to 4-1. State College added one more in the sixth.

Jhonneyver Gutierrez went five innings and took the loss for the Scrappers. He gave up four runs, all earned. Gutierrez had one strikeout and walk, increasing his ERA to 5.02.

The Scrappers have been 2-for-8 in series-opening games. Malave said he was proud of the way his team is able to bounce back.

“This group of guys is very dedicated and very passionate about learning,” Malave said. “This is something we’re going to learn from and carry on into tomorrow’s game.”

The Scrappers have now lost seven straight games to the Spikes, looking to end that streak tonight at 7:05 p.m.

Davis was coach to several locals

Bill Davis spent the 1980s as an NFL executive with the Miami Dolphins, Cleveland Browns and Philadelphia ...

COLUMBUS — Kerry Coombs is returning to the Ohio State coaching staff, this time as defensive ...