Scrappers bounce back to beat Spikes 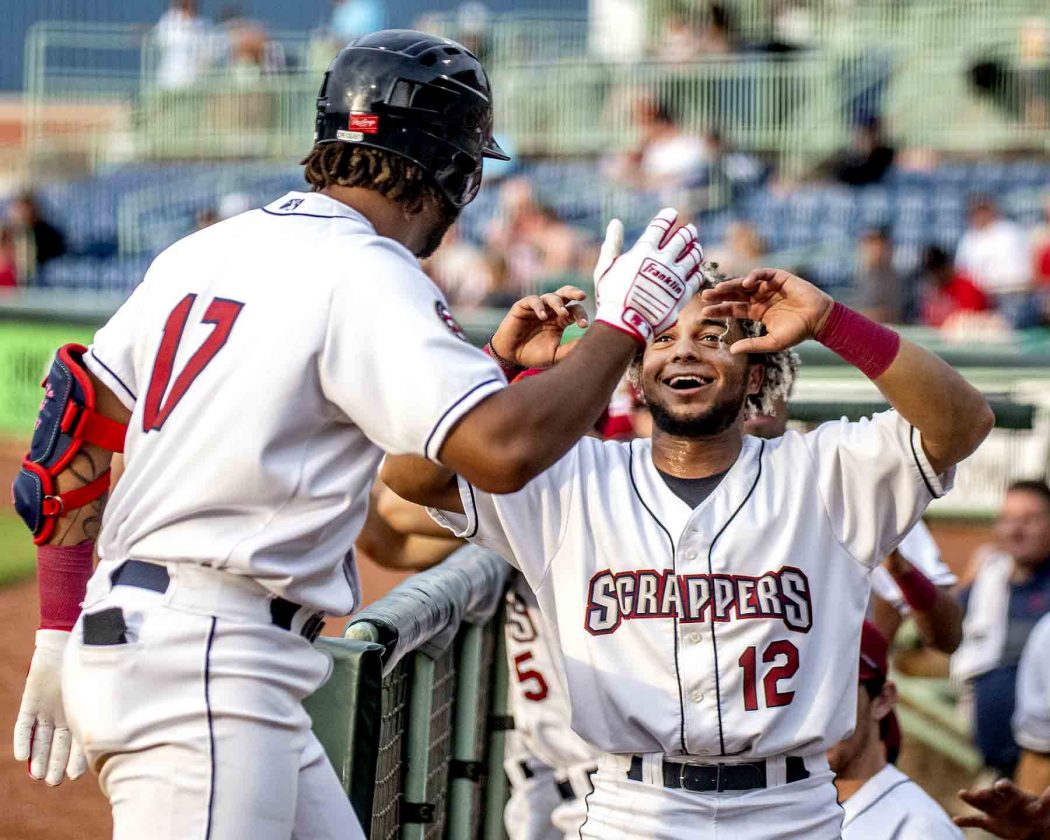 Special to the Tribune / Dianna Oatridge Mahoning Valley's Henderson DeOleo (17) celebrates with teammate George Valera (12) after hitting a home run during their game against State College at Eastwood Field on Saturday.

The Scrappers (12-10) snapped a two-game losing streak with a 6-4 win over State College at Eastwood Field.

Scrappers right-handed pitcher Luis Valdez recorded the win as he provided relief for starting pitcher Liam Jenkins. Valdez struck out two Spikes, while only giving up one earned run over two innings of work. The loss was handed to Spikes starting pitcher Jeremy Randolph with Scrappers southpaw Tim Herrin earning his sixth save on the year.

Although the game featured no postgame fireworks, the 2,527 spectators saw a colorful display of batting early in the game. First baseman Michael Cooper put the Scrappers on the board first with an RBI single. 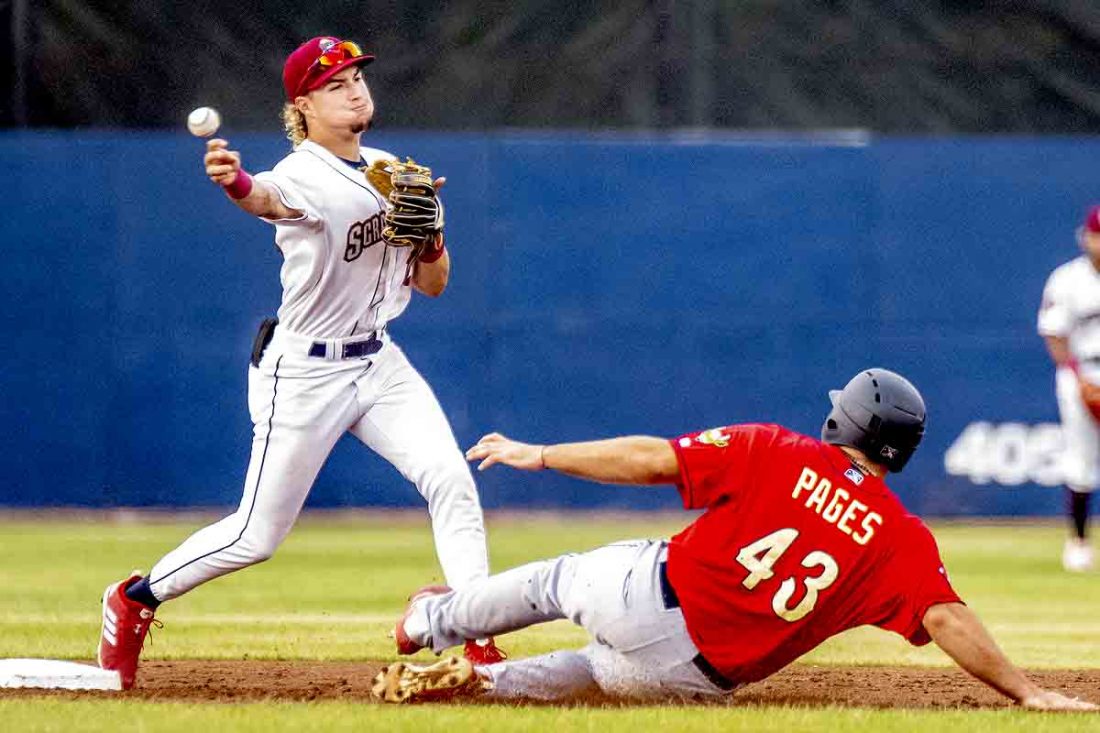 Special to the Tribune/ Dianna Oatridge Mahoning Valley's Raynel Delgado forces out State College's Pedro Pages (43) before throwing to first base for a double play during their game at Eastwood Field on Saturday.

“In recent games I was just trying to put the ball in play, because I’m kind of fast,” Alfonseca said after the game. “I was trying to do too much early in the season.”

State College pitcher Adrian Mardueno had the bases loaded in the bottom of the third with no outs, but gave up only an unearnerd run off of an RBI groundout by Bryan Lavastida to make it 4-0.

“It was good to see our guys taking good swings and pitches,” Scrappers manager Dennis Malave said. “The mindset these guys have is always positive, and it’s an aggressive mindset as well.”

Scrappers starting pitcher Liam Jenkins went four innings, giving up two runs, with only one being earned, while striking out two batters and walking four. In his final inning he ran into a little bit of trouble as a passed ball and sacrifice fly made it 4-2, Mahoning Valley in the middle of the fourth.

Second baseman Ray Delgado answered back, blasting a solo shot into the Scrappers batting cage behind the bullpen in right field to make it 5-2 after four. State College gained that run back in the top of the fifth inning off an RBI single by Spikes shortstop Moises Castillo to make it 5-3. 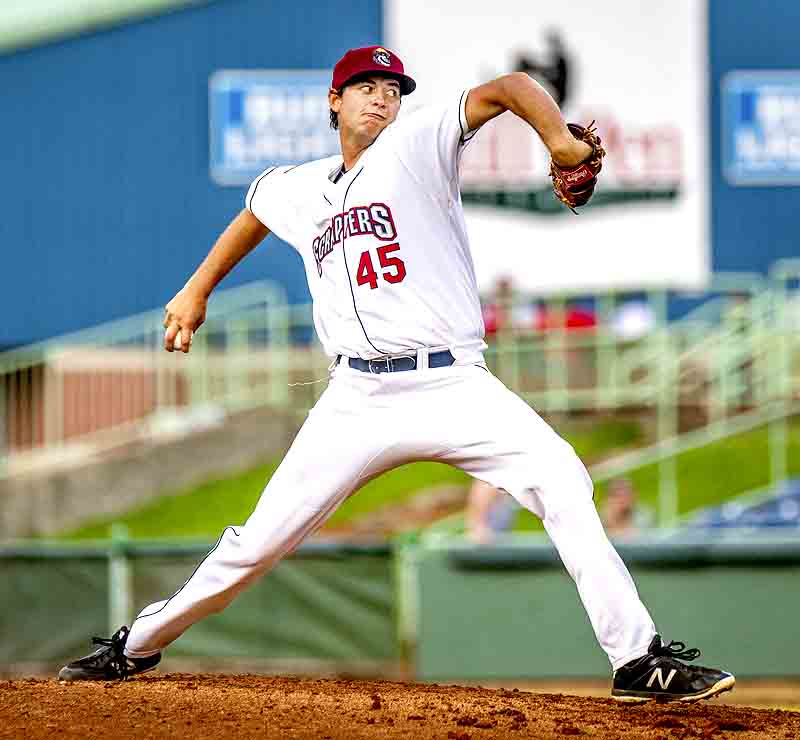 The Scrappers pitching held down the fort in terms of protecting the lead the entire game, their skipper noticed.

“Jenkins gave us four innings, and it was a good outing for him,” Malave said.

Late in the game the Scrappers manager tried his hand at the shift and wanted to get his guys acclimated with how to use it effectively.

“It’s just another opportunity for our guys to work on what they are going to see at higher levels and it also gives us an opportunity to understand the game more,” he said.

In the top of the seventh inning Scrappers reliver Nick Mickolajchak gave up a run on a wild pitch as Jonatan Machado scored to make it 5-4. In the bottom of the eighth the Scrappers tacked on an insurance run with an RBI sacrifice fly by Brayan Rocchio.

Alfonseca scored the run after stealing second and reaching third when pitcher Eric Lex threw the ball past the second baseman into center field on a pickoff attempt.

Herrin netted the save after going 1 2/3 innings, giving up one hit and striking out one. With a solid performance on both sides of the baseball, Alfonseca expressed a lot of excitement for his club after the game.

“We had to win this game to get back on track. We’re playing really good as of late even though we lost two straight games, but we’re not focused on that part because we know we are a good team. Everybody is doing their part,” he said.

The Scrappers sit 1 1/2 games behind the first-place Batavia Muckdogs in the New York-Penn League Pinckney Division. They will take on the Williamsport Crosscutters today at Eastwood Field with the first pitch scheduled for 4:05 p.m. The probable starter for Mahoning Valley will be left-handed pitcher Matt Turner who sits at 1-2 on the season with a 4.05 ERA.