DeFalco goes from Niles to YSU 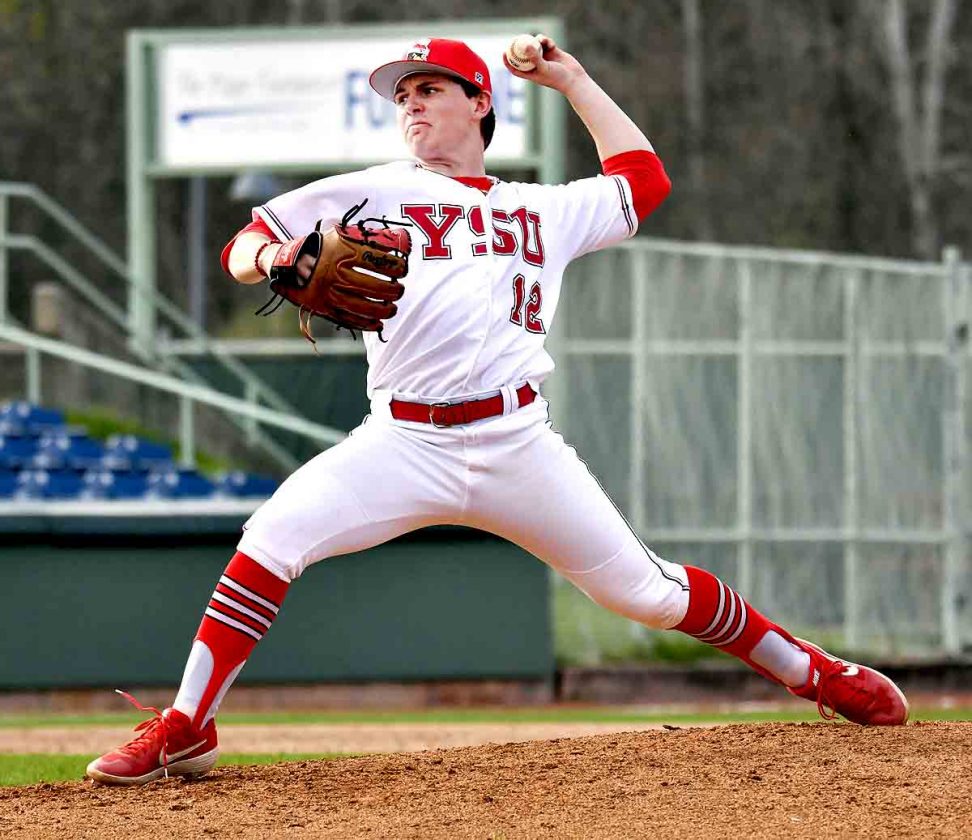 Marco DeFalco wasn’t expected to be a starting pitcher during his freshman campaign at Youngstown State, but due to several injuries, DeFalco had to step up this season, and gained valuable pitching experience.

“I came in and I was expecting 1 to 2 innings max in games, and a few injuries happened, and coach (Dan Bertolini) called on me to start, and I saw my opportunity,” he said. “I was a starter all in high school, and that’s what I really love to do.”

DeFalco had a great career as a starting pitcher at Niles, as he tossed three no-hitters and was a two-time AAC White Tier Player of the Year. He also played for the Astro Falcons in the Youngstown Class B League during summer ball.

“I can’t say enough about the Guarnieri brothers over there at Niles, they really prepared me for where I am now, and just all my teammates there. I know I got them in my corner, wherever I go, wherever I play,” DeFalco said. “So really, having them to help me grow into a man and just be ready for the college level has really helped me out tremendously. I can’t thank them enough.”

Bertolini has seen DeFalco put in the work.

“He pitched really well early, and it’s tough to be a freshman of his size, logging all those innings,” Bertolini said.

DeFalco started nine games for the Penguins this season, and has appeared in 14 games. The first win of his collegiate career came in a 10-8 victory over first-place Wright State, where he pitched 5 2/3 innings and only allowed three runs on five hits against a hard-hitting Raiders team.

His first career save at YSU also came against a big team, when he blanked the Pitt Panthers of the Atlantic Coast Conference to help guide the Penguins to a 4-2 victory over the Power Five program.

DeFalco appreciates the playing time he had this season.

“I’m sure three years down the road, I’ll be looking back at this and just be really glad that I got the opportunity to really grow and mature in my freshman year,” he said. “Coming into my sophomore year, I’ll feel more like an upperclassman rather than a lowerclassmen. I’ve been through a lot now, so I’ve closed in big situations, in big games, so I’m ready for anything.”

Having his parents at his games has helped him a lot, too.

“Always knowing I have someone here watching my games, to talk to after the games, it’s just great knowing that they’re there every single game. It’s just amazing.”

The Horizon League tournament starts Wednesday at Wright State University. YSU will play Milwaukee in a first-round single-elimination game on Wednesday at 4 p.m.

DeFalco helped the Penguins cruise to a 9-3 victory over the Panthers on Saturday afternoon in YSU’s regular season finale at Eastwood Field. He limited Milwaukee to only two runs during his 4 2/3 innings pitched.

“I want to win a Horizon League championship,” DeFalco said. “I know it means a lot to every single one of those seniors and everyone of the players in the clubhouse.

“I just want to bring one here, we haven’t had one here in awhile (2014), and it would just mean a lot to everyone, not just me, but to everyone in Youngstown and the community.”

Today marks another passage for many of us as the season turns to summer and we cope with the realities of our ...

The 11th season of Greatest Golfer of Youngstown aims to tee off this summer with its first event scheduled June 9 ...

CLEVELAND — Myles Garrett on one end. Jadeveon Clowney on the other. Just the thought of it elicited a quick ...

Passion of Krivonak ‘pitched’ to others

Stephen Krivonak passed away earlier this month at the age of 74, and the man known as “Sheeny” spent his final ...