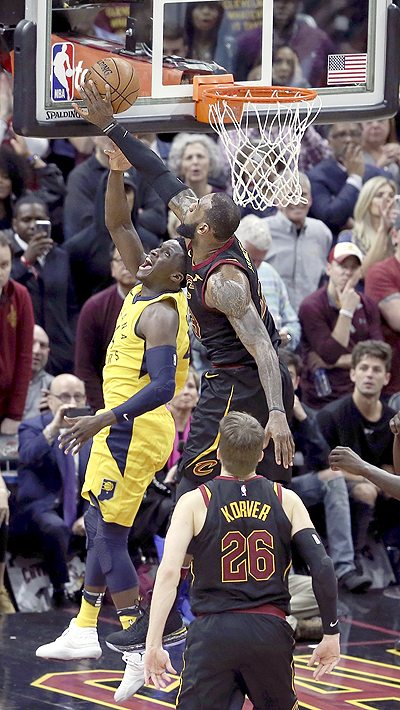 CLEVELAND — The game, the series, the season and perhaps Cleveland’s future were in jeopardy.

James dropped a 3-pointer at the buzzer, a crowning moment for another one of his brilliant performances, to give Cleveland a 98-95 victory over the Indiana Pacers on Wednesday night in Game 5, putting the Cavaliers within one victory of advancing in the Eastern Conference playoffs.

As Cleveland’s sellout crowd exploded, James hugged rookie teammate Cedi Osman before jumping on the scorer’s table to celebrate another of those moments that will define a career he dreamed of while growing up in Akron.

“As a kid you always have those 3, 2, 1 moments and that’s what it kind of felt like,” James said. “I felt like I was a kid all over again playing basketball at my house on makeshift hoops and my socks as a basketball.”

James finished with 44 points, 10 rebounds, eight assists and went 15 of 15 from the line.

“He does it at both ends every single night,” Cavs forward Kevin Love said. “That’s why he’s the best player in the world.”

Kyle Korver added 19 points and Cleveland’s much-maligned defense tightened just in time as the Cavaliers seized their first lead in the first-round series after being down 1-0 and 2-1.

Cleveland can close out Indiana with a win Friday night in Indianapolis.

But while James’ shot will long be remembered, the Pacers were stinging from his block they felt was illegal.

With the score tied at 95-all, Oladipo, who shot just 2 of 15, drove the left side and was at the rim when James swooped in for a block on a play reminiscent of his Game 7 block on Andre Iguodala in the 2016 NBA Finals.

However, Oladipo thought his shot hit the backboard first, and goaltending should have been called. TV replays showed the ball appear to hit the glass before Jams touched it.

“I got a step on him and I felt I even got grabbed,” Oladipo said. “It hit the backboard and he blocked it. It was a goaltend. It’s hard to even speak on it. That layup is huge.”

James smiled when asked about the play.

“Of course I didn’t think it was a goaltend,” he said with a laugh. “I try to make plays like that all the time. He made a heck of a move, got me leaning right and he went left and I just tried to use my recovery speed and get back up there and make a play on the ball.”

Oladipo’s shooting woes continued. He’s only 12 of 50 from the field in the last three games. He scored 32 in the Pacers’ Game 1 win, but the Cavs have been double-teaming him ever since.

The third quarter has been a major problem for Cleveland all season. The Cavs had tried everything to try and shake things up after halftime, even doing layup lines at the break in Game 4 like a high school squad.

Turns out, all it took was some defensive intensity.

Down by seven at half, the Cavs swarmed the Pacers in the third quarter, forcing five turnovers in the first six minutes and holding Indiana to one field goal over the first 6:52 while opening with a 19-3 run.

Cleveland outscored Indiana 32-17 in the third, when the Pacers shot just 5 for 16 (31 percent) and committed seven turnovers.

“We didn’t do anything new,” said guard Jose Calderon, who started his second game in place of George Hill. “We were just more aggressive.”

Calderon provided a huge lift, making a pair of 3-pointers and contributing several other hustle plays in 20 minutes. The 36-year-old has done whatever Cleveland’s needed.

James had enough to worry about with the Pacers that he didn’t want to discuss close friend Dwyane Wade’s future.

Miami’s star is mulling retirement after the Heat were eliminated Tuesday in Philadelphia. James spent four years playing in Miami with Wade, who began this season with the Cavs before being traded.

James said that following his last game against Wade he told him, “‘If it’s like our last time going against each other, then it’s been everything and more.” James wants to wait for Wade to make his decision and will then “give a more in-depth analysis of his career if he decides to hang ’em up.”

Pacers: Following Lance Stephenson’s aggressive, wrestling-like takedown of Jeff Green in the waning moments of Game 4, coach Nate McMillan said he reminded the fiery forward to be careful. “The officials are going to be watching that, Lance knows that and there are some times where I think they (the Cavs) are taking advantage.” … Dropped to 2-12 in their last 14 games in Cleveland. … James’ triple-double in Game 4 was the sixth against Indiana in the playoffs. James has done it to the Pacers three times.

Cavaliers: With his 21st 40-point game in the playoff, James tied the logo — Jerry West — for the second-most all-time. Michael Jordan scored at least 40 in 38 postseason games. …. Hill’s back has improved in the past few days, but he didn’t look close to playing while sitting stiffly in his locker-room chair before the game. … Browns Hall of Fame running back Jim Brown sat courtside.

Game 6 is Friday night at Indianapolis.

PITTSBURGH — Mitch Keller’s first go-round in the majors was a study in contrasts and a snapshot of where ...

NEW YORK (AP) — Mookie Betts, Gerrit Cole and a pair of high-profile matchups are set for opening day as Major ...