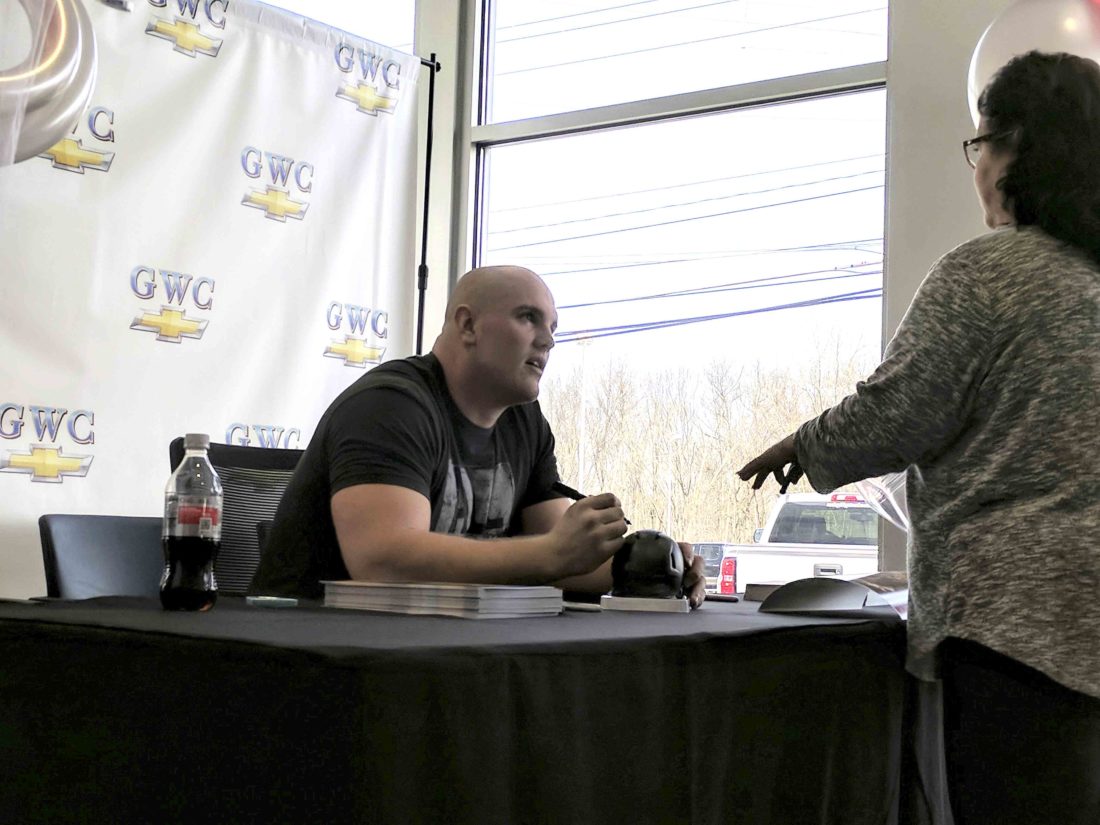 Tribune Chronicle / John Vargo Austintown Fitch High School and The Ohio State University graduate Billy Price, left, signs a mini helmet for Linda Williams of Niles during Price’s appearance at Greenwood Chevrolet in Austintown. Price is one of the top three centers in this year’s NFL Draft, hoping to be picked in the first two rounds.

AUSTINTOWN — Phil Annarella remembers seeing him on the court, dribbling, quickly moving his feet and posting up.

The Austintown Fitch High School football coach was told about an eighth-grader named Billy Price who came to a Falcons’ basketball camp.

Annarella noticed the agility Price possessed for a boy closing in on 6-feet in the body of a lineman.

“He was so athletic for a young man his size,” Annarella said.

Price eventually became an All-American offensive lineman at The Ohio State University and is one of the top three center prospects in this year’s NFL Draft, along with Warren G. Harding graduate James Daniels, who was a standout in his own right at Iowa. Price played guard his first few years at OSU. 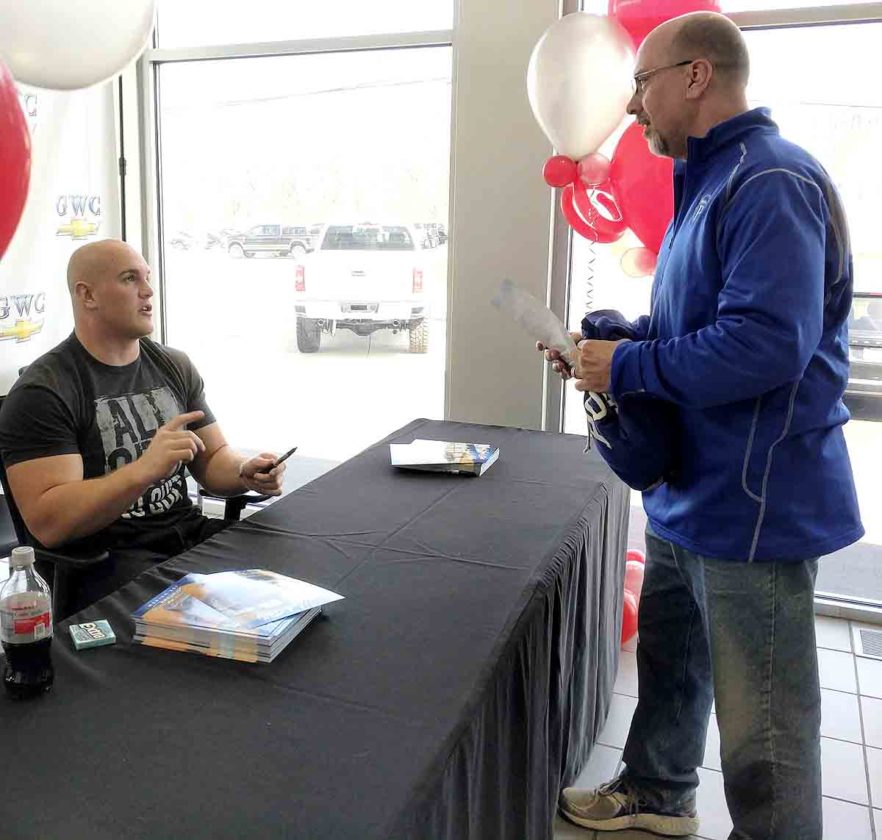 The two crossed paths during the interview process in which both have gone through a gauntlet of questions as franchises debate whether either is a fit for their teams.

They remember the times when Price was on the defensive line at Fitch, going against Daniels on the o-line for Harding. It’s those kinds of battles which molded Price into a great collegiate player and top-level NFL prospect.

“For me, it’s a matter of grit and being tough from this area,” Price said. “Nothing is handed to you, whether it’s Friday night and you’re playing Fitch-Harding. Those games are tough, very physical. It’s something you develop into college. You understand to work hard. You understand that discipline you have to have in order to be successful. I think it’s translates very well.”

Annarella, who coached at Harding in the 1990s, had a young man named Korey Stringer on those teams. That 6-4, 335-pound lineman became an All-American at OSU and a Pro Bowl selection with the Minnesota Vikings before tragically dying in the summer of 2001 due to complications brought on by heat stroke.

Annarella sees the similarities in Price and Stringer.

“Unless you knew both of them, you wouldn’t understand that,” Annarella said.

Price, at 6-foot-4, 305-pounds, personifies what Annarella’s programs are about — hard work and discipline. Just because you’re a high-level athlete doesn’t mean your academics are secondary. The Fitch coach demands his student-athletes pay attention to both aspects. Price exemplified everything that is Falcons football.

Through the interview process, Price visited with about nine teams. The Tennessee Titans, Minnesota Vikings and other NFL teams have their eye on the Ohio State standout, projected to go in the first or second round of this year’s NFL Draft. The first round is Thursday, while the second round starts Friday.

Annarella, who said he was contacted by the Los Angeles Rams, said Price is also a long snapper. That adds to the versatility.

“There’s nothing they’re going to dig up,” Annarella said. “If they were looking for dirt, they weren’t going to find any. I think that’s really important.”

One question on most team’s minds was the slight tear of his pectoral muscle during a bench press test at the NFL Combine in early March.

He was cleared on Thursday and starts bench pressing soon, putting him ahead of schedule. He’ll get an all-clear by early- to mid-June.

Price started in 55 games at OSU and was a stalwart on the Fitch offensive and defensive lines. No injuries at either stop.

“It shook you a little bit, made you question some things,” he said about the injury. “Again, you have to attack the rehab 100 percent. We were doing six-days-a-week rehab at Ohio State before I was taking these trips. We’re weeks ahead of schedule right now.”

He’ll watch the draft with family and loved ones. His father, Bill, who is part of the Fitch coaching staff, said he’s been a Rams fans since he could remember.

“Obviously that’s out of the question because they don’t have a first-round pick,” he said. “Minnesota, Buffalo, Detroit, Cleveland. No Steelers, and you can print that. They beat us in 1979 in the Super Bowl, so I don’t like them.”

Billy wants to show teams he’s a dependable player, that iron man on the line they’ve been seeking.

After football, he’ll have his life set as he studied business administration with specialization in operations management in Columbus. He had a couple of internships, most notably at Nike.

“That’s what you’re supposed to do,” Price said. “You’re supposed to set yourself for life, especially using a platform like Ohio State. The opportunities are endless. If you do the program right and you do things right in the area, coach (Urban) Meyer and Ohio State fans will go to the ends of the world to do anything for you.

“It’s exciting for that as well, but we’re going to have a long career in the NFL, stay healthy and be that guy.”

This opportunity was forged through countless hours of preparation in the gym and on the practice field.

That’s what Price shared with the young people in line to see him Saturday at Greenwood Chevrolet, aspiring to make their mark.

“Don’t dream too small,” Price said. “Anything is possible. Don’t be afraid of a challenge.”

He’ll find out his next step later this week.