Tenacious McDonald girls had shot to be state’s best 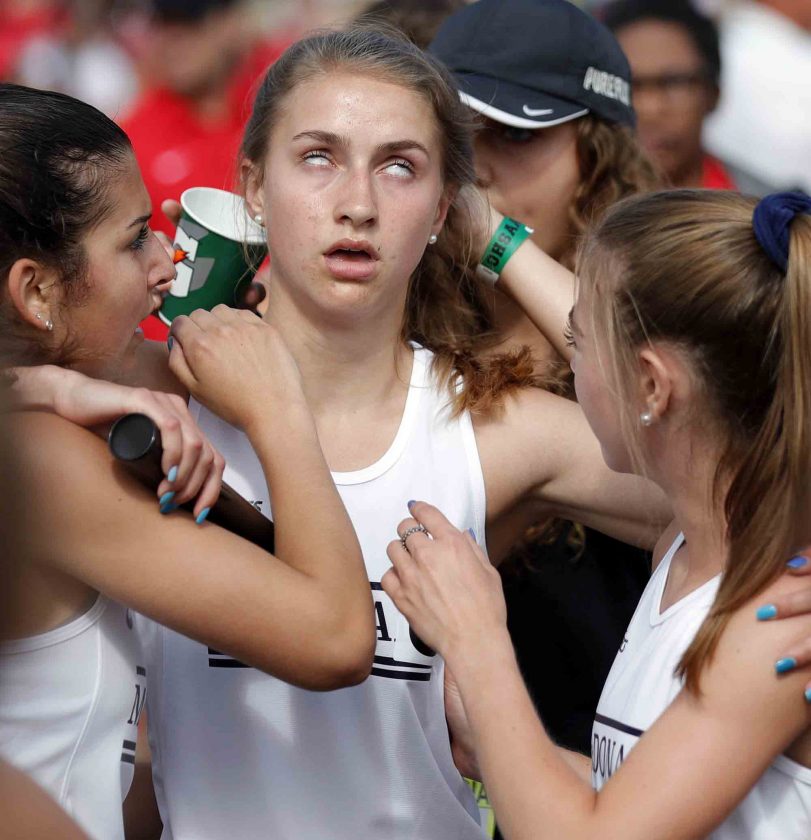 Sela Jones had the best view. Her friend and teammate crossed the finish line again.

The humidity was almost unbearable that day, taking a toll on the athletes on the all-weather track.

Bella Wolford won’t let it bother her. Her legs have to take her across the finish line. Anything less is unacceptable.

“Bella has been one of my favorite people to watch ever, especially in the 800 (meter run),” Jones said. “She always gives it her complete all. I love to see her fall over at the end. I love to be there when she falls over because that shows she put all of her effort on the course in cross country or in track and field. I’m going to miss seeing that.”

Wolford emphasized her McDonald High School girls track and field team, which finished seventh at last year’s Division III track and field meet, was one of the most hard-working teams in the state. 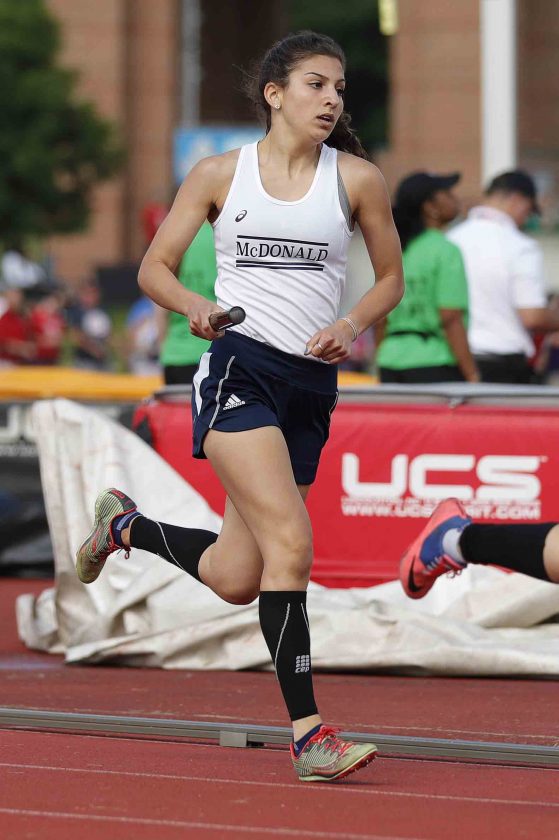 She finished fifth in the state 800 last season, just .05 seconds out of fourth.

Wolford exemplifies the gritty nature of this Blue Devils team.

“I want to think every time I was able to step out on the track I would give it my all and make sure I was giving my best, possible effort for everyone on my team,” Wolford said. “It’s really difficult with everything going on knowing you don’t get that opportunity to give it your all. That’s just how it goes.”

The COVID-19 pandemic — it has isolated the state because of Gov. Mike DeWine’s stay-at-home order. Schools are closed. Spring sports are canceled and no state meet.

Seniors Bri Gillespie, Anna Guerra, Wolford, Trinity Hobbs, Jones, Grace Kawecki, Gianna Mediati and Janessa Martinelli have combined to be the heart and soul of this McDonald girls track and field team, one that could have competed for a state team title. McDonald won the D-III title in 2014.

“Your heart just aches for them for the things they wanted to accomplish,” McDonald girls track and field coach Mary Domitrovich said. “Your heart aches for the seniors all over, not for what they’re missing out in their senior track and field season, but so many of the other things they’re missing out on as seniors. The mentoring they do to the underclassmen, it’s going to be felt for years. The juniors are missing out with those special things with the seniors. Our freshmen look up to seniors all the time. That will be missing, too. It’s sad.”

It started with the girls 4×800-meter relay, which has taken fourth in the state for the past three seasons. Guerra, Wolford and Jones have been part of those teams. Martinelli was on the team last season, but she didn’t get to run during cross country season this past fall.

She had goals, as did the other three and the rest of the McDonald team, trying to lead the 4×800 team beyond another fourth-place finish.

She tore 50 percent of her labrum, resulting in extensive surgery.

Martinelli said she had her femur popped out of place. The bone was re-shapen and put back into place. Muscles were put together. In her quad, the tendons were lengthened because of tightness.

She dealt with pain throughout her junior season. Physical therapy followed all last summer.

This track season was going to be her comeback.

“It kind of sucks,” Martinelli said. “I haven’t been able to have a senior season at all. That is what was kind of heartbreaking for me.”

Guerra cannot believe she’s not going to run the 4×800, get another shot at the state meet. She finished second in the girls 3200 last season with an eye on a state championship.

“I felt like I was in great shape coming into the season,” she said. “It is really disappointing, knowing what I could’ve done this upcoming state meet.”

Hobbs threw a personal best 126 feet, 1 inch to place second in the discus at the D-III Springfield District. She eventually headed to the state meet, but didn’t make it to the finals.

It was the fuel she needed going into this season.

She was working out all last summer, took some time off and then started lifting and conditioning in November with all eyes on another state trip.

Now, it’s about what might have been, Hobbs in the throws and Gillespie in the jumps and hurdles, including the middle distance and distance events, could’ve lifted McDonald up the D-III ranks.

“I’m going to miss it a lot, so many friends and relationships,” said Hobbs, who will compete at Malone University next season. “We all encouraged each other. We worked super hard in everything that we did as far as track goes.”

The 4×200 and the 4×400 relays have been successful for McDonald in the past and would’ve been this season. Wolford and Jones are instrumental in both events.

“It’s at the end of the meet and it might be dark by then,” Jones said. “Sometimes when it’s a nail-biter between teams, and you’ll wonder who’s going to come in second. It comes down to that last race. It would amp you up so much, and I know I’m going to miss that a lot when I don’t continue my season after this year.”

Guerra is running at the University of Kentucky next season.

“It is really exciting,” she said. “I think that’s what’s keeping me happy during this time, that I have something to look forward to. For me, it’s not like completely the end of running.”

Wolford is going to be competing for Kent State University, excited to be part of the Golden Flashes team.

“I know a lot of my teammates aren’t going to be going to the collegiate level,” she said. “I’ve been blessed to do that.

Domitrovich said she saw when these seniors were freshmen how special they were, how they never gave up no matter the circumstances. Her heart aches for this group of eight. She realizes the bigger picture of this quarantine and keep them positive.

Wolford perfectly exemplified the gritty nature of this team, one that had a shot at a team state championship.

“She has a special personality where there’s never give up clause with her,” Domitrovich said. “Even if she’s not feeling well, no matter what it is, you know when she steps out there, she’s going to put that all aside and still give whatever she has in the tank. She’s going to give it all.

“Her guttiness, her sheer determination, is going to be missed. Again, it would’ve been fun to see where that would’ve taken her — her senior year.”