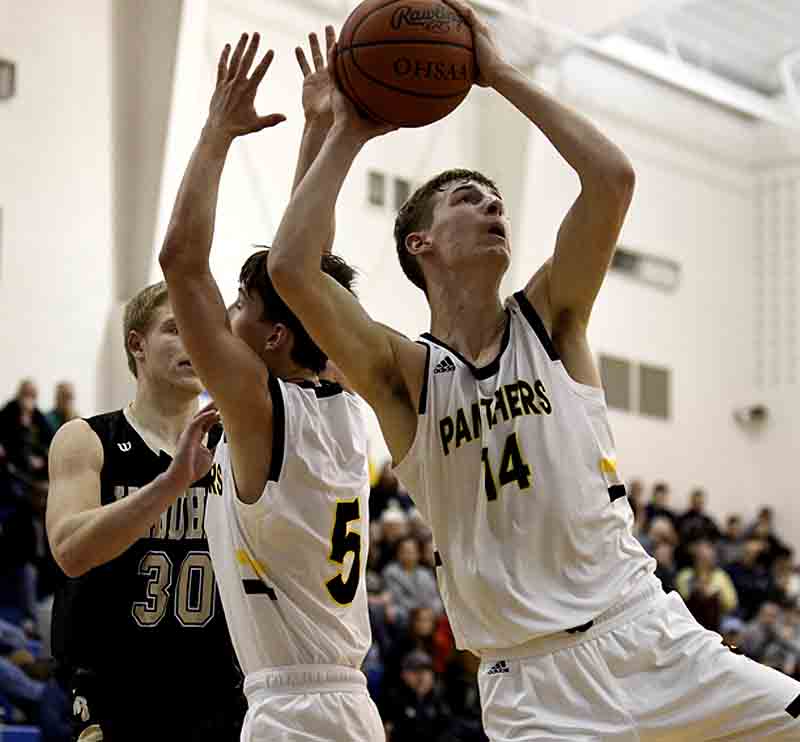 The basketball program at Bristol High School has seen many skilled players walk the halls over the years. Senior Matt Church is the latest to reach the 1,000-point mark.

Getting here wasn’t an easy endeavor. Church came into the program as a 6-foot-3 freshman who hadn’t developed his skills.

“Coming in as a freshman, I was a bigger kid for being 15 years old,” Church said. “My skill set hadn’t quite caught up to my size. Those first couple years I really relied on my work ethic and that’s kind of what got me on the varsity squad for a couple years. As I started to develop a bit more skill-wise, I started to catch up to the upperclassmen and my role started to increase.”

That development came from working, not just on the court. Church’s skills grew in the classroom.

“He’s had to work for everything he has,” Panthers coach Craig Giesy said. “He put a lot of time on his body in the weight room. He has a really high motor and is a really good person — 4.0 (GPA), valedictorian, president of his class all four years and president of the Beta Association of the state of Ohio.

“He’s just been a leader from the get-go, and not just in basketball. The first thing that comes to my mind is pride because it wasn’t a natural thing for him. He had to work for it and develop his ability to play the game.”

His ability got him to the 1,000-point mark in an important battle against Windham. The team was trailing and needed a spark.

“We were at Windham and we weren’t playing very well at the time, so it was the last thing on my mind,” Giesy said. “Him approaching that landmark and achieving that goal, that I’m sure was a goal of his even if he’d never admit it.”

In that game, Church didn’t realize it because he was focused on the team and not his own performance.

“The main purpose of that day was obviously to win the game,” he said. “I wasn’t really focused on (reaching 1,000). It was just kind of there, but I didn’t really know it was coming. So when I hit it, I was ‘Okay, I don’t have to think about it. It’s out of the way.’ “

Bristol lost that game, but finished the season 19-6, which for Church, was the fourth time in four years his team had 19 or more wins. According to Giesy, Church played in 101 games as a Panther, winning 85.

Church is going to be using those skills he picked up in the classroom in college as he enters the medical field.

Church is a role model to the younger kids, who strive to duplicate his work ethic.

“This is a prime example of what we want our kids to be like at Bristol,” Giesy said. “We want them to have the work ethic and carry themselves on and off the floor. He’s been a great piece for our program and even a better role model for the kids that are underneath him.”

Church will miss the family aspect of Bristol.

“Obviously a lot of schools are pretty small but like just across the board from the superintendent to the little kids in kindergarten, everyone knows everybody,” he said. “I know family is a term that’s used a lot, but it’s really fitting for the Bristol community because you literally know everyone.”