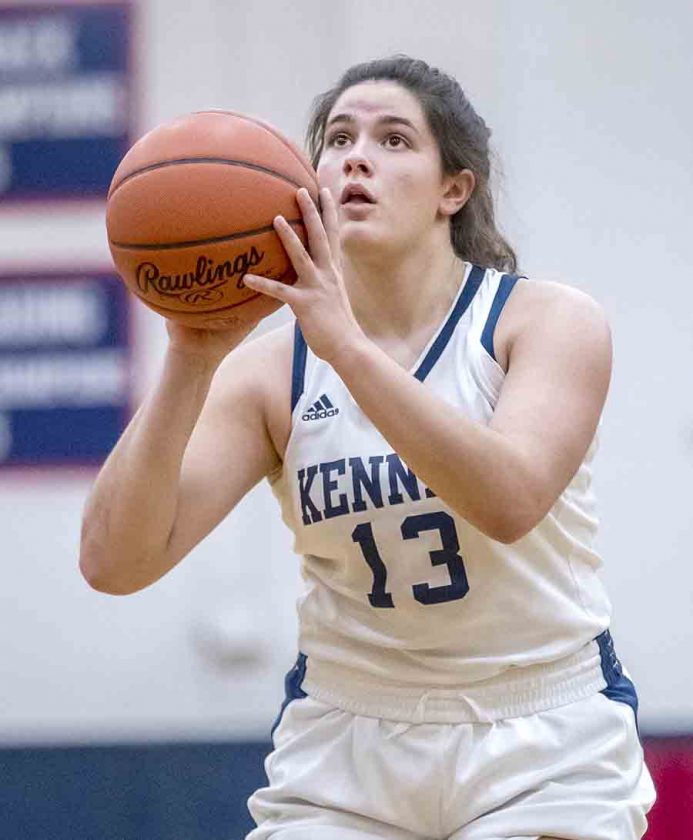 Caitlyn Condoleon saw the shot go in on Jan. 25 inside the Gillen Gymnasium.

John Condoleon, her coach, knew the sweat and toil she exuded through each and every practice and game. He should know. He’s not only her basketball coach, but father as well.

“I put the coach on hold for a little bit and the dad in me came out,” John said. “She’s meant so much to this team for four years and to this program, everything she’s done and accomplished. I couldn’t be more proud.”

Caitlyn broke Antonella LaMonica’s record set a couple of seasons ago. Caitlyn was a freshman when LaMonica was a senior at JFK. LaMonica currently is a sprinter on the Youngstown State University track and field team.

“It was something I’ve worked hard for, put a lot of time into,” said Caitlyn, who averages 27.2 points a game. “I saw her break the record. It’s something I put in my mind I really wanted to accomplish and really wanted to do, not only to make myself proud, but my teammates and my dad proud, my family, especially. It truly meant a lot to me.”

John said he wished LaMonica and Caitlyn could’ve played together for more than one year.

“To have Antonella here and do what she did with such a young team, because we were just starting the program again at Kennedy,” John said. “She went through a lot of tough times. She withstood that. It’s a testament to her, how good and tough of an athlete she was.

“Caitlyn, the last two years, is basically working with a very young team. Both showed so many leadership qualities, even in the losses. They were frustrating, but you never saw it on their faces. You never saw it in their demeanor.

“They were always positive working with the younger kids. It’s made it easy for me to coach two outstanding players like that.”

LaMonica said Kennedy would’ve advanced further in the postseason if the two had played together more than just one season.

“It would have been amazing to play with Caitlyn for more than one year, and a lot of fun,” LaMonica said. “She is one of my best friends and we had amazing chemistry on the court. We always pushed each other to get better and we wanted to win games. I believe we would have had a great opportunity to go even further in the playoffs if we would have had another year together.”

Caitlyn said she loved playing basketball with her friend.

What LaMonica will say is that Caitlyn will succeed at the next level.

“Caitlyn has become such a tremendous leader,” LaMonica said. “She is leading her team to a winning record and always wants to learn and improve her game. Her future is bright and I can’t wait to see her continue playing the game she loves at the next level.”