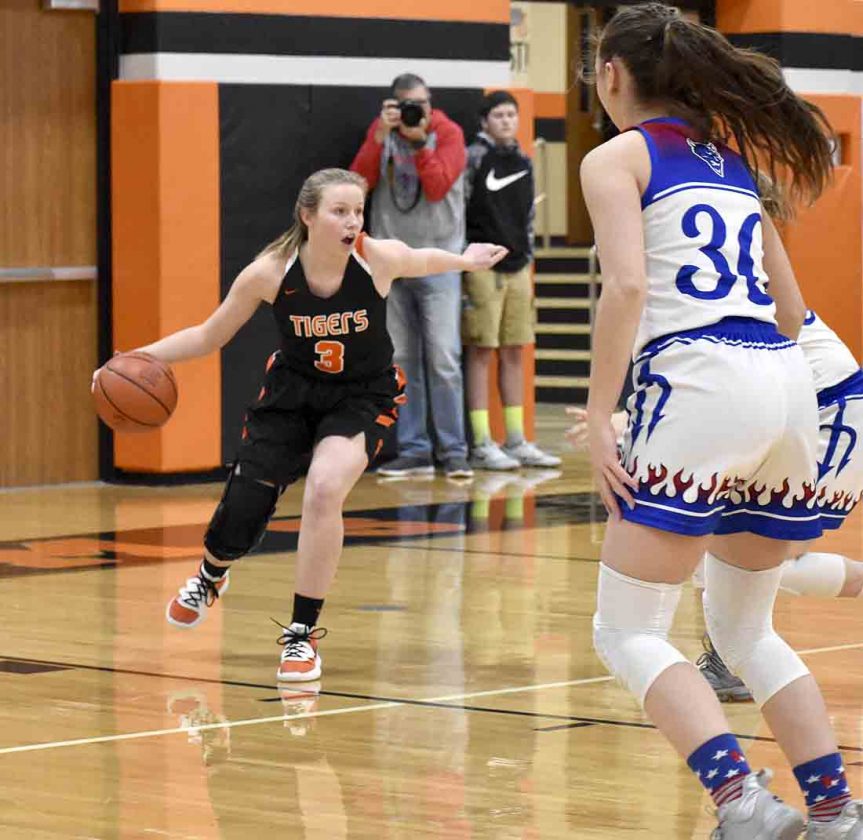 Staff photo / Brad Emerine — Allison Sembach (3) of Newton Falls tries to work through a trap by the Western Reserve defense.

Staff photo / Brad Emerine — Allison Sembach (3) of Newton Falls tries to work through a trap by the Western Reserve defense.

MINERAL RIDGE — With a 6-foot-2 cog in the middle and a number of strong perimeter shooters spreading the floor, the Western Reserve High School girls basketball team is diverse and dangerous.

Danielle Vuletich, a junior, scored 24 points, and classmate Olivia Pater added 17 on the strength of three 3-pointers as Western Reserve improved to 20-4 and advanced to Saturday’s district final at 4 p.m., back at Mineral Ridge.

“That’s the most diverse team we’ve played this season,” Newton Falls coach Mark Baker said. “They’ve got the big girl in the middle, they handle the ball well and they can really shoot it. They present a challenge for everyone.

“I’m proud of my girls and the effort they gave, and it was a good season to finish 16-8 with all the obstacles we faced this year with injuries and illness and what not.”

“We’re closing in on 170 made 3-pointers this year, which is a school record,” Western Reserve coach Steve Miller said. “With Danielle in there and four or five girls who are capable of catching fire from the outside, when we play well, we’re tough to beat.

“But the one thing that goes unnoticed is our defense. We’re really good defensively. We use four different presses, we can go fullcourt or halfcourt and we apply ball pressure. If teams can get past the ball pressure, it’s tough to drive with Danielle sitting back in there. Tonight, we forced a number of turnovers, made them start their offense out further than they would’ve liked, and we got a number of blocked shots, too.”

The Blue Devils broke away from a 7-all tie with a 9-2 run to close the first period with a 16-9 lead. Vuletich scored nine points in the period and Prater had five. Western Reserve led 28-15 at halftime, as Pater scored eight points and Vuletich added the other four.

While Western Reserve’s shooting cooled considerably in the second half, the Blue Devils’ defense took over. Western Reserve led 36-20 entering the fourth period.

Perhaps they were leaving something in the tank for the district final. They will play top-seeded McDonald or fifth-seeded Jackson-Milton, who played in the late semifinal Wednesday.

Western Reserve is familiar with both as fellow members of the Mahoning Valley Athletic Conference. Western Reserve and McDonald, who played in this district final last season, shared the league title this year at 11-1. Western Reserve lost 34-33 on Jan. 9 at home and won 51-46 at McDonald on Feb. 6.