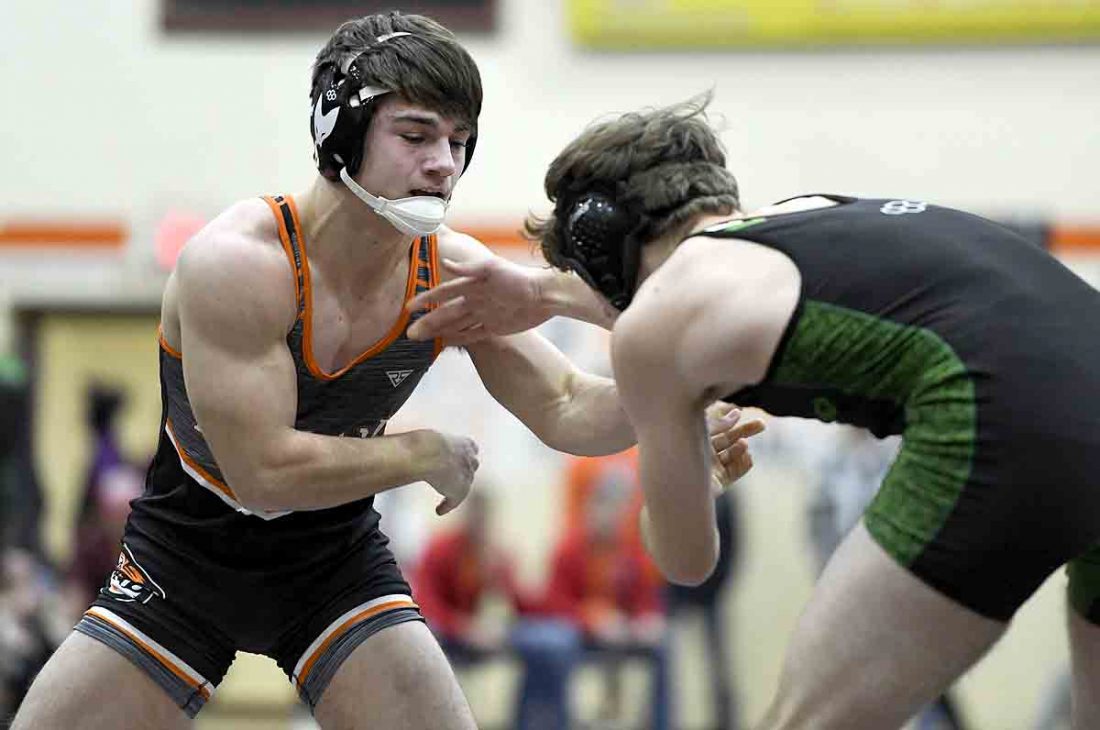 Correspondent photo / Robert Hayes Matthew Woomer, left, of Howland calculates his next move during the 145-pound championship match at the Howland Invitational Tournament on Saturday.

HOWLAND — Whenever an event is held for 59 consecutive years, there’s bound to be a lot of history behind it.

Matthew Woomer, a sophomore for the Howland Tigers, already etched his name in the Tigers’ history book last year when he became the first wrestler in school history to qualify for the state tournament as a freshman.

Despite not having competed yet this season due to an injury he sustained during the football season, Woomer was determined to be ready for the Howland Invitational Tournament, which is the second longest running annual tournament for wrestling in Ohio.

He didn’t disappoint in his first outing of 2020, as he went 4-0 to win his weight class (145 pounds) in the historic event at Howland High School.

“I know that I belong with all the people in the past from Howland,” Woomer said. “I know what kind of work I put in, so I believe I should be at the top of the podium every time here.” 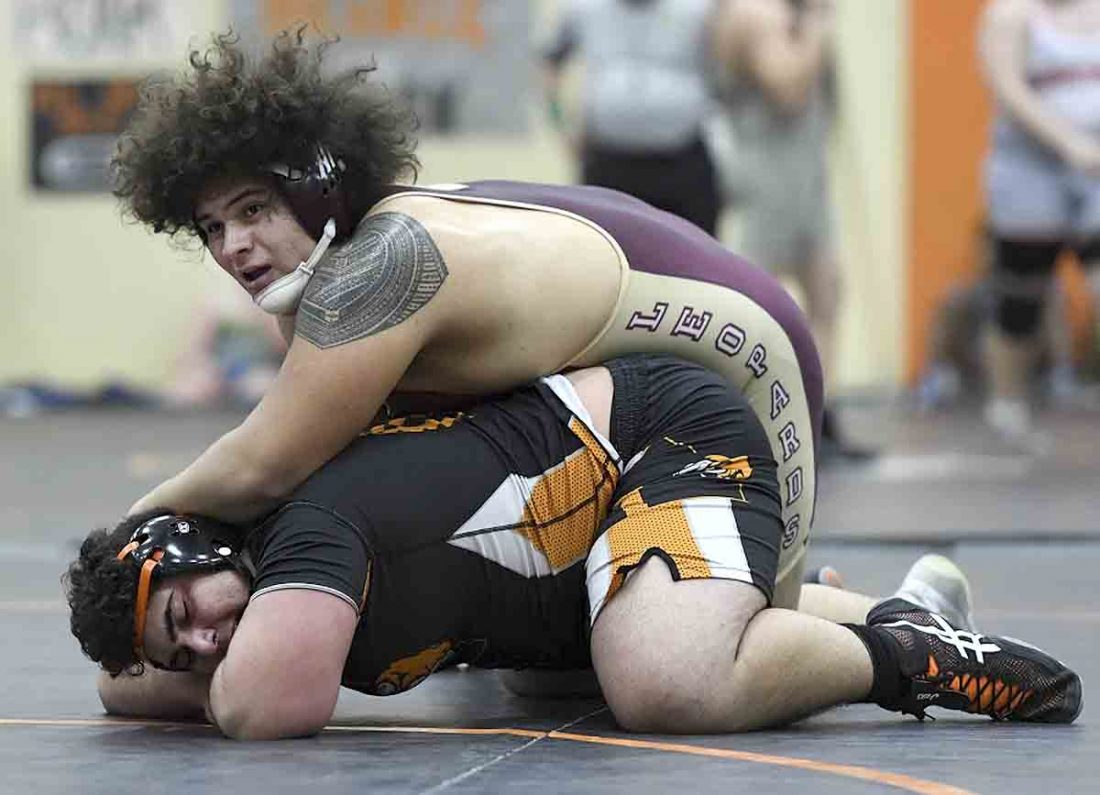 Howland coach Matt Zakrajsek was proud to see Woomer back out on the mat after missing time.

“This is pretty much his December-era, so I’m overall pleased,” Zakrajsek said. “His cardio could use some work and just overall sharpen some things up.

“But (he’s) wrestling at a pretty high level right now, and looking to keep pushing throughout the season and get ready for sectionals and districts, hopefully Columbus.”

Woomer defeated Warren Wright of Medina Highland in the 145-pound championship, and he said that the experience he gained during his freshman season helped him get off to a good start in his first varsity match of the year.

“I know what work I can put in the room, after practices, get to the gym and know what I have to do to compete at the highest level I can,” he said. “I’m excited for (the Eastern Ohio Wrestling League Tournament), then go to sectionals, districts and hopefully get to states again — getting on the podium and showing them what I’m all about.”

“It’s something that the community really looks forward to, at least the wrestling community,” he said. “A lot of alumni come back, alumni help work it. Tournaments in high school definitely couldn’t run without a lot of volunteer support.”

A pair of local wrestlers competed in the heavyweight final, with Howland’s Georgio Frazeskos facing off against Liberty’s Simi Moananu in the 285-pound weight class.

Moananu took down Frazeskos in the final match of the evening, pinning him in the third period, to improve his record to 21-2 on the season.

“Georgio is a very strong and fast kid,” Moananu said. “In my mind, in all my other matches I was all right, but come this match I know this guy is no pushover. Still no matter who it is, you should go 100 percent.”

This was the second time the two athletes have competed against each other and, despite not winning, Frazeskos felt he was more prepared this time around.

“Me personally, I’m only a fouth-year wrestler, so I think I know a little bit more,” he said. “Last time I didn’t really have a lot of go-to moves, and he didn’t expect it this year, so I was able to work him more for the match. He was able to pin me in the second period last year, but this year he still got the win, and like I said (he’s) a great athlete, but it was a lot better.”

Leopards coach Hadi A. Hadi has a roster with 17 underclassmen, no juniors, and five seniors, but he said his younger wrestlers have gained a lot of experience this year.

“The experience they’re getting here in this sport is priceless,” Hadi said. “It’s not like football where you’ve got freshmen standing on the sideline and they don’t see the field.

“These guys are getting in there, they’re seeing some success, which is very important, so they’re taking their licks and bumps and bruises, but they also saw some success today, which is great. They’ve seen some success on the year, so we’re hoping that’s going to translate into next season, and as they mature and move the system.”

Moananu missed his freshman and sophomore campaigns due to injury and came back last year during his junior year. As a senior, his favorite moment has been seeing the underclassmen learn from the older students.

“Both football and wrestling, we’ve got a lot of young guys. I love seeing that moment where you try to help these young guys out, and you see them progress.