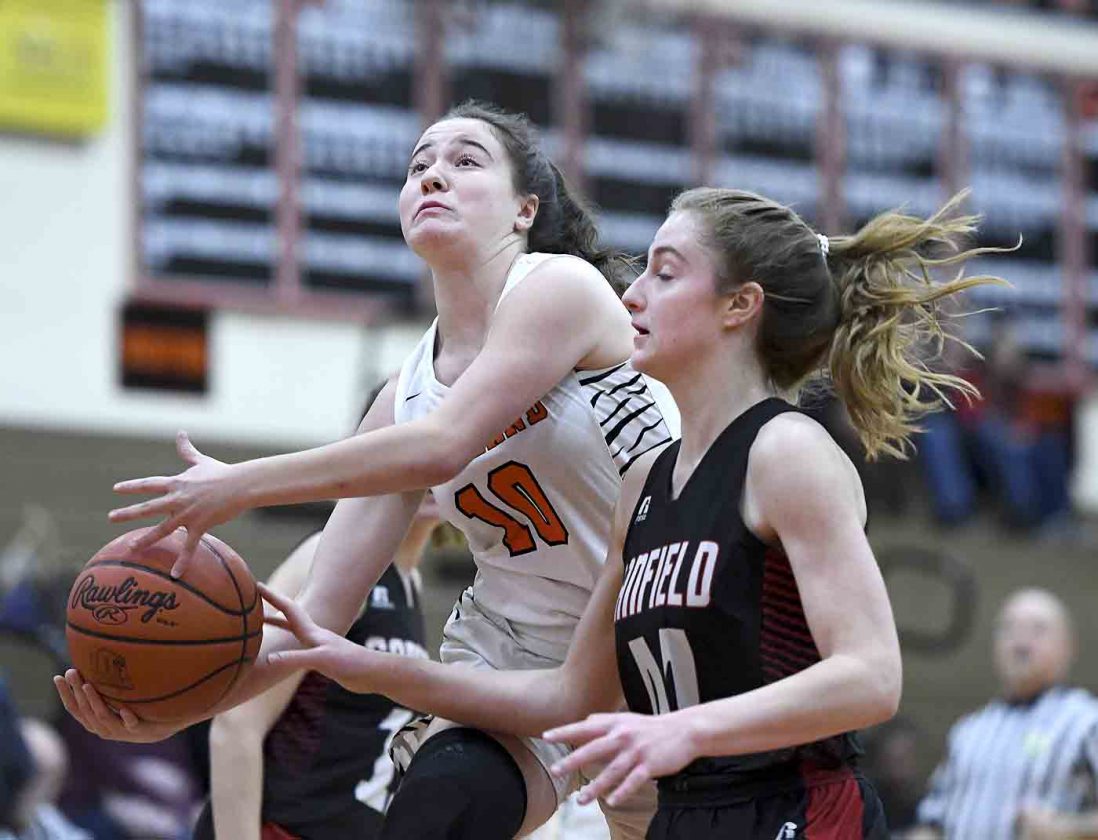 Correspondent photo / Robert Hayes — Kylie McClain, left, of Howland goes in for a layup against Canfield’s Grace Mangapora during the second quarter Wednesday night at Howland. McClain scored 14 points for the Tigers, who lost 52-45.

HOWLAND — Most would agree that Howland has one of the more unique gyms in the Mahoning Valley.

With its double-decked seating and recessed lower bowl that fans and players have to walk down to, it stands out from most other gymnasiums.

Canfield coach Matt Reel refers to the Tigers’ gym as “The Pit” and understands the Cardinals are always going to have a battle when they travel north to Howland.

The Cardinals survived that battle Wednesday night, coming out on top of the Tigers, 52-45, in an All-American Conference Red Tier game.

“It’s exactly what we expected,” Reel said. “We were talking about how difficult it is to win here, in what I call ‘The Pit.’ 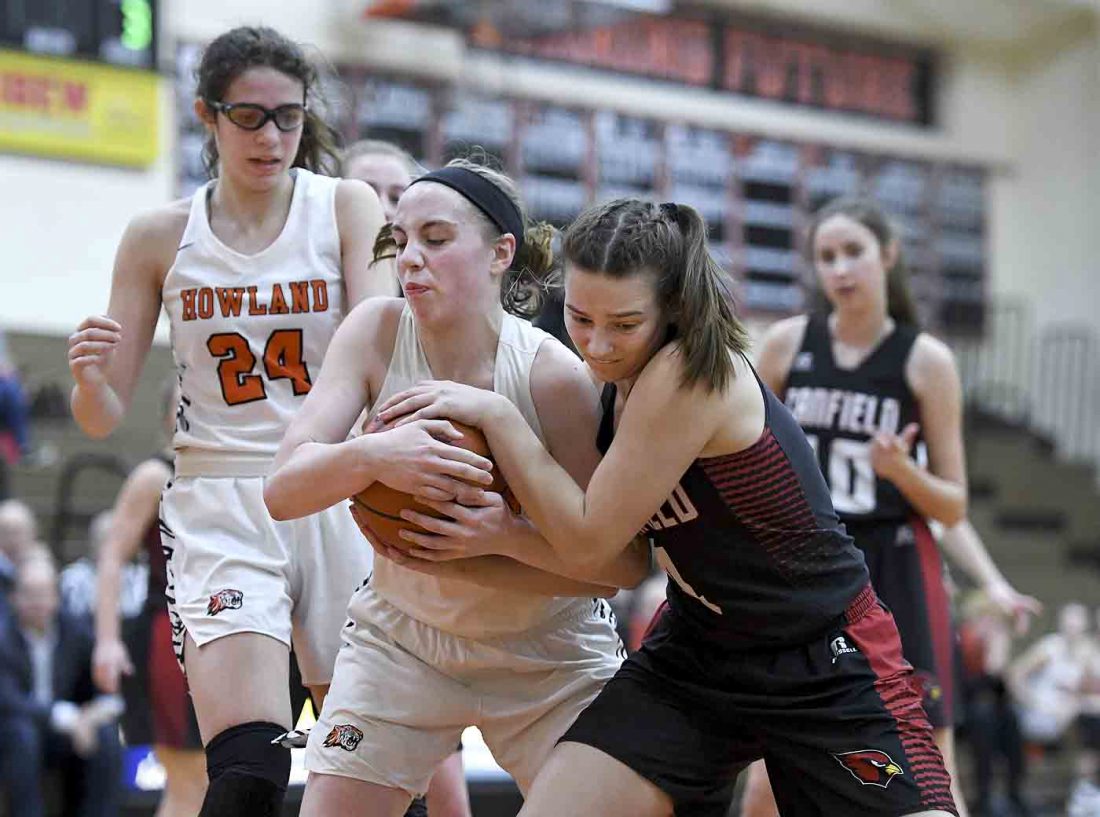 Correspondent photo / Robert Hayes — Courtney Clark (second from the left) and Aiden Orlovsky (right) battle for a rebound during the fourth quarter.

“You’re walking down the steps and it’s due to how well they’re coached, how good of players they have. So I’m just really excited for our girls, how hard they played and just responded to the real good challenge.”

Howland coach John Diehl said too many opportunities were missed by the Tigers.

With the postseason on the horizon, Diehl said a change of pace in practice might help his team.

“I guess we’ve got to practice harder a little bit. Game-like practicing is what we’ve got to do, I think maybe I’ve let them relax, maybe they’ve relaxed themselves a little bit,” he said. “The only reason you miss layups like that is because you’re going a click faster than you’re used to doing, and that’s why they missed them. I’m putting the blame on me.” 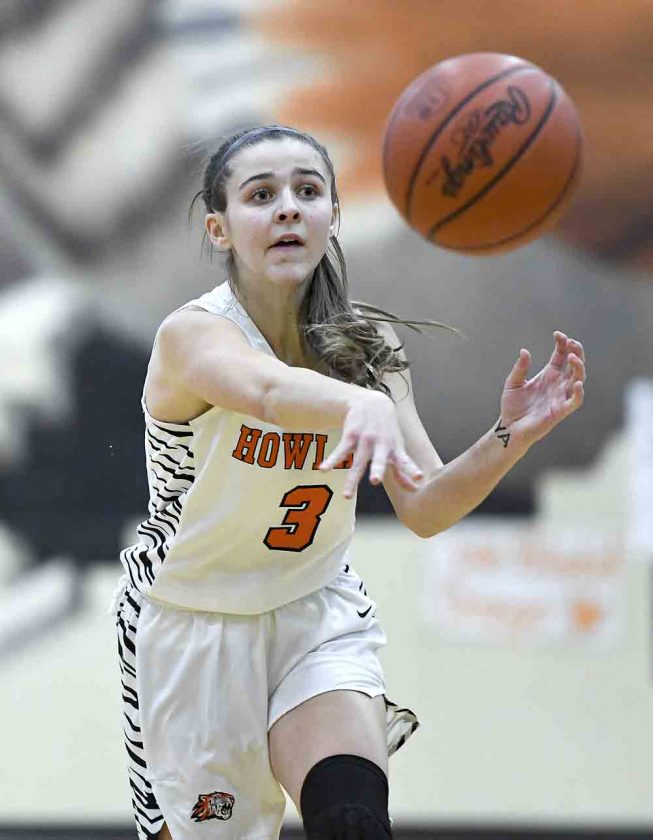 Correspondent photo / Robert Hayes — Ashley Chambers passes the ball to the outside during the second quarter at Howland High School.

Canfield took an early 11-4 lead after the first eight minutes of play, but Howland made a 6-0 run to start the second quarter after Ashley Chambers hit a shot to make it an 11-10 game. But that’s as close as the Tigers got to tying the Cardinals, who fired back with an 8-0 run themselves capped off by a 3-pointer by Morgan Carey.

Howland (8-7, 2-3 AAC Red) did cut the deficit to six points at 45-39 with Kylie McClain playing a major role in the Tigers’ potential comeback. Canfield point guard Marissa Ieraci made six free throws in the last few possessions of the game to seal the deal for her team.

Canfield (11-4, 4-1) never trailed at any point during the game and Wednesday night’s contest was the second time they defeated Howland this season.

Ieraci ended the game with a game-high 18 points, while also being 8-for-10 at the free throw line.

“I wouldn’t have gotten any of it if it wasn’t for my teammates. I think we really work well together on offense, working the ball together, so I really owe it all to them.”

Ieraci was moved over to the point guard position after Serena Sammarone graduated, and Reel said she’s doing well.

“She’s still growing on the job, she’s a first-year starter at point guard and I thought as the game went on she got more and more confident,” he said.

“Defensively she was excellent, and we expect her to make those (free throw) shots, because she’s always done it in her career.”

Mangapora had 14 points for Canfield, but was held to just four points in the first half.

Reel saw the game against Howland as another way to prepare for the postseason.

“We think every game we’re playing this year is really preparing us for the tournament and the tournament in Division I, it’s such a crapshoot,” he said. “You really don’t know who you’re going to have and every game you play is going to be really tough.

“So, I think this just really prepares us and we’re still trying to get a piece of that league title.”

Correspondent photo / Robert Hayes — Kylie McClain, left, of Howland goes in for a layup against Canfield’s Grace Mangapora during the second quarter Wednesday night at Howland. McClain scored 14 points for the Tigers, who lost 52-45.

Correspondent photo / Robert Hayes — Courtney Clark (second from the left) and Aiden Orlovsky (right) battle for a rebound during the fourth quarter.

Correspondent photo / Robert Hayes — Ashley Chambers passes the ball to the outside during the second quarter at Howland High School.