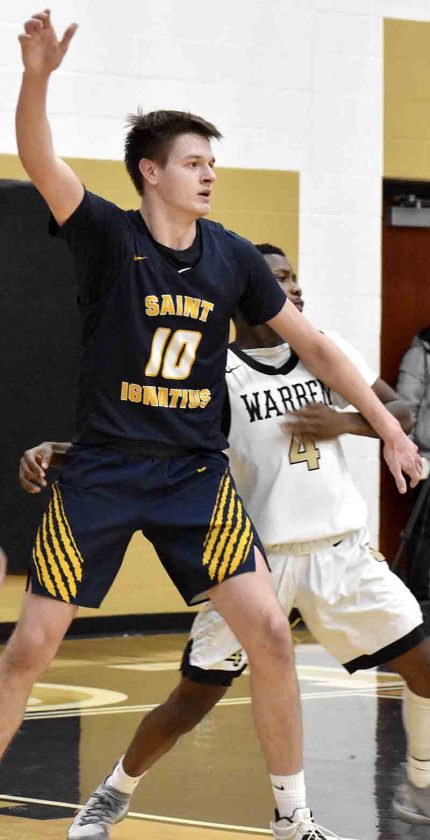 WARREN — The Warren G. Harding boys basketball team tasted a bit of its own medicine, and coach Keelyn Franklin is hoping the elixir left a bad taste in the mouth of his team.

Cleveland St. Ignatius forced six Harding turnovers in the first quarter and built a 14-4 lead that the Raiders never came close to recovering from, and the Wildcats left town with a 47-35 victory.

“Our turnovers led to easy points for them, but more than that, our transition defense was non-existent for a while,” Franklin said. “Turnovers are going to happen in every game, but we’ve got to sprint back and load up and make them play against a defense. We also have to locate their shooters in transition.

“When we did that, we played good defense. But in the first quarter, it was more or less a layup line. We were barely at halfcourt and they’re laying the ball in.”

Part of that problem stemmed from a stagnant offense that didn’t have a lot of patience against St. Ignatius’ tall, zone defense.

“Their length really, really bothered us today,” Franklin said. “We watched a lot of film on them and they didn’t show any zone at all. Then they come out in that zone and I said, ‘Oh, here we go.’ They go 6-6, 6-8, 6-3, 6-5, and we’re a smaller team and it’s kind of hard to manipulate that type of zone and get good shots consistently.”

With the Wildcats’ sizable, quick guards applying ball pressure and 6-foot-7 Henry Raynor and 6-8 C.J. Yarian effectively keeping the Raiders from penetrating, Harding’s offense stalled. When the Raiders tried to force the action, the six turnovers plagued them.

“We knew we had a size advantage on (Harding) and we were going on the second leg of back-to-back,” Ignatius coach Cam Joyce said. “They’re a quick team and we wanted to keep them out of the lane. So (the zone) was a dual purpose — save our legs a bit and make them shoot from outside. We needed to keep (D’Muntize) Owens away from the hoop and give him little room to shoot from the perimeter as well. They struggled to finish over our size.”

The closest Harding got the rest of the way was 18-14 in the middle of the second quarter, but St. Ignatius led 24-17 at halftime and 36-27 entering the final quarter.

“You could see some (of the lagging transition defense) unfold,” Franklin said. “We were aggressive trying to get to loose balls or tipped balls or long rebounds. We were trying to get there, but (St. Ignatius) would beat us to the ball and then throw it over top of us to guys breaking wide open the other way for layups.

“We haven’t seen that since this summer, but we cleaned that up and we’ve stopped taking as many risks and we’ve been making teams play us five-on-five. We’re a great defensive team when we get back on defense.”

Yarian’s putback with 2:55 left in the game gave the Wildcats their largest lead at 43-27. He finished with six points and Raynor had 12, including a pair of dunks. Point guard Chase Toppin led Ignatius with 16 points, with 10 of those coming in the first period.

Owens led the Raiders with eight points and Johnny Graham had six on a pair of 3-pointers. Without much transition scoring and unable to get offensive rebounds, Harding resorted into a perimeter-only shooting club and finished 17-for-63 from the field.

“We’ll get back to work and get things figured out again,” Franklin said. “It’s a long season and we need to bounce back and not let this turn into a bad stretch.”

We all must work for the common good