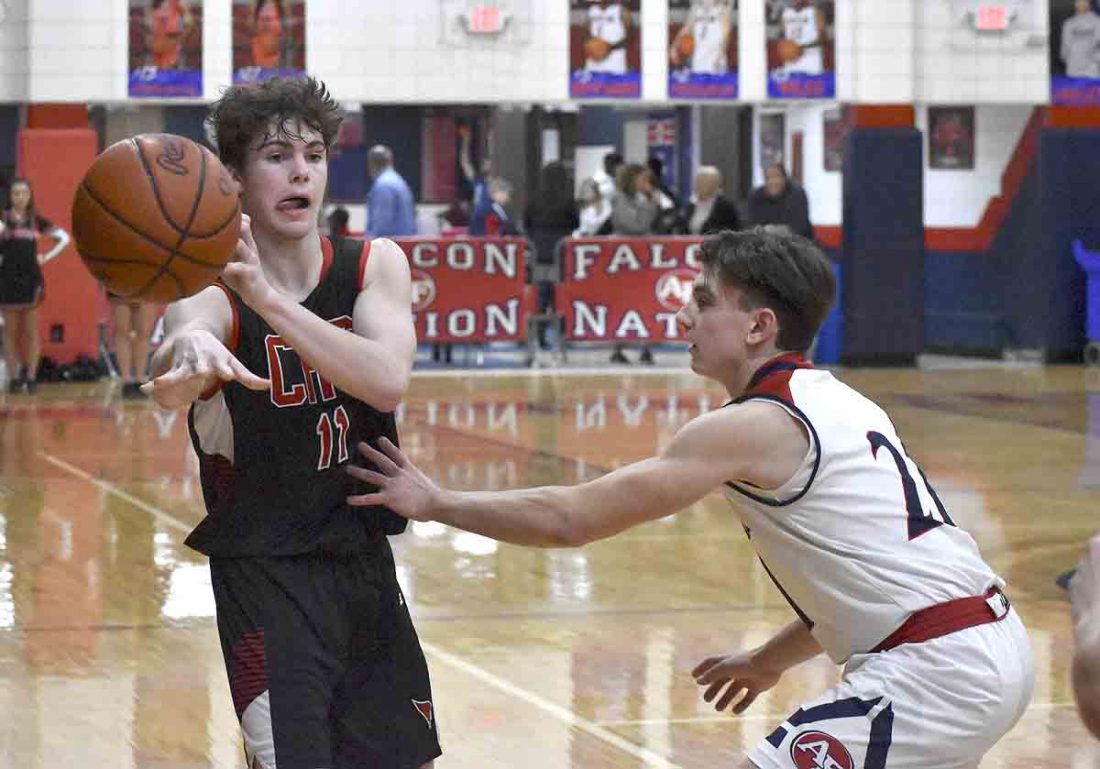 He cleared his mind at halftime.

The Austintown Fitch standout dominated the third quarter and helped the Falcons pull away from Canfield, 65-51, in a rivalry matchup at Fitch High School.

Simons scored 12 of his game-high 26 in the third quarter, when the Falcons (6-4, 2-0 All-American Conference, Red Tier) stretched a five-point lead to 11 and took control of the game.

“Usually we have a good third quarter,” said Simons, a 6-foot-3 junior guard. “We just come out and try to bring the intensity out of half. Those two fouls early for me really slowed down the offensive production, but we kept it close, which gave us the ability to spring forward in the third.

“I didn’t have to worry about foul trouble that much, so I could come out and play freely on offense and defense.”

Joe Bruno was the catalyst for Canfield, scoring nine points in the first half with the offense running through him. Leading 32-27, Fitch switched to a zone defense in the second half, which caused the Cardinals some problems.

Bruno, who finished with 14, constantly had players in his face, and the offense seemed to be disrupted by Fitch’s switch.

“They played that zone a little bit, and sometimes that eliminates some of shooters’ touches,” Canfield coach Todd Muckleroy said. “We don’t have a lot of guys who can shoot it from the outside, so we have to penetrate gaps. That zone kind of took us out of our rhythm a little bit, so it was a good move there.”

While Canfield’s offense scrambled for production in the second half, Simons and the Falcons started to flourish.

With much of the focus on Simons after his big third quarter, senior Kris Brown began to find his stroke. He was integral in closing out the Cardinals, who cut the lead to 50-44 with 6:32 left in the fourth quarter before Fitch finished on a 12-7 run.

Brown scored 11 of his 25 points in the fourth, including going 5-of-6 from the free-throw line.

“With someone like (Simons), it makes someone like Kris Brown better,” Muckleroy said. “He had a good game tonight too. Certainly that’s one of the secondary things that having a good player does. It makes your other players, who are good players, even better. That’s the best part about Todd Simons.”

The victory was a big one for the Falcons.

Aside from starting 2-0 in the league, they beat a cross-town rival and executed well in a number of areas. That’s especially important because Fitch’s next game is against undefeated Boardman (8-0, 1-0), another rival that is one of the area’s top teams.

“It was a really good team win,” Fitch coach Brian Beany said. “I’m proud of the guys. We’ve got two big ones next week in conference play, so we’ve got to enjoy this one tonight and get ready for Boardman on Tuesday.”

The versatile Simons will need to have another big night, and Beany is confident he and the Falcons will be ready for the challenge. Watching them overcome some early adversity was another positive sign to Beany.

“I told (Simons), ‘In the second half, you’re out there playing like you have no fouls.’ We just had to get him through that first half,” Beany said. “That was one of the few times all year he’s gotten some early (fouls) and had to sit. Most of the time he can go through.

“And I said it before to the paper: Every time we play, he’s one of the top two players on the court. It doesn’t matter who we play, he’s always going to be up there, and he’s going to get his.”