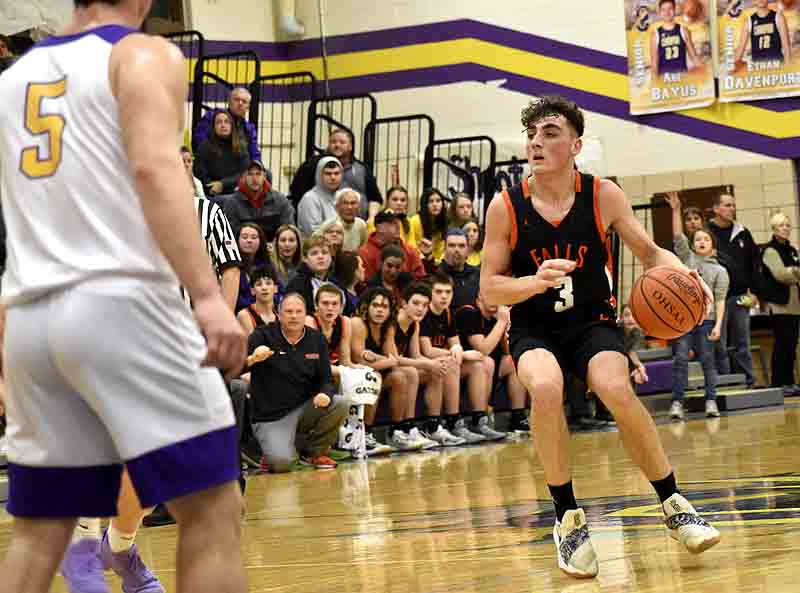 Staff photo / Brad Emerine — Josh Honeycutt of Newton Falls squares up to make a deep 3-pointer during the Tigers’ 63-56 league victory at Champion on Tuesday night.

Staff photo / Brad Emerine — Josh Honeycutt of Newton Falls squares up to make a deep 3-pointer during the Tigers’ 63-56 league victory at Champion on Tuesday night.

CHAMPION — With Champion leading Newton Falls by one and just over 2 minutes remaining in their boys basketball game Tuesday night, Josh Honeycutt and Joey Kline made the key plays as the Tigers fended off the gritty hosts, 63-56.

Honeycutt made a steal and passed to Kline for a layup to give the Tigers the lead. After the Flashes missed a field-goal attempt, Newton Falls slowed the pace until Kline found Cole Marquette under the bucket for another lay-in and a 59-56 lead.

“I thought Josh and Joey played very well, as did everyone,” said Newton Falls coach Roy Sembach, who was excited to escape and head home after his troops improved to 13-1 overall and 7-0 in the All-American Conference, Blue Tier. “We were fortunate to build a good lead and get out of here with a win because Champion was definitely scrapping hard, and it was a physical battle all game. We were without one of our starters, Ian King, who is home ill, so we asked some other guys to step in and they played solid defense and played within themselves.”

The Golden Flashes had consecutive turnovers in their next two possessions. After the first, Champion coach Nathan Kish opted to try to force a turnover rather than foul. Champion twice thought they should’ve gotten a 5-second call on Newton Falls’ ball handler.

With just four fouls, Champion began trying too late to put the Tigers at the free-throw line. Honeycutt found an opening, skirted the baseline for a lay-up, was fouled and converted the old-fashioned three-point play to give the Tigers a 62-56 lead with 18 seconds left. He made one of two free throws in the final seconds to account for the final points. 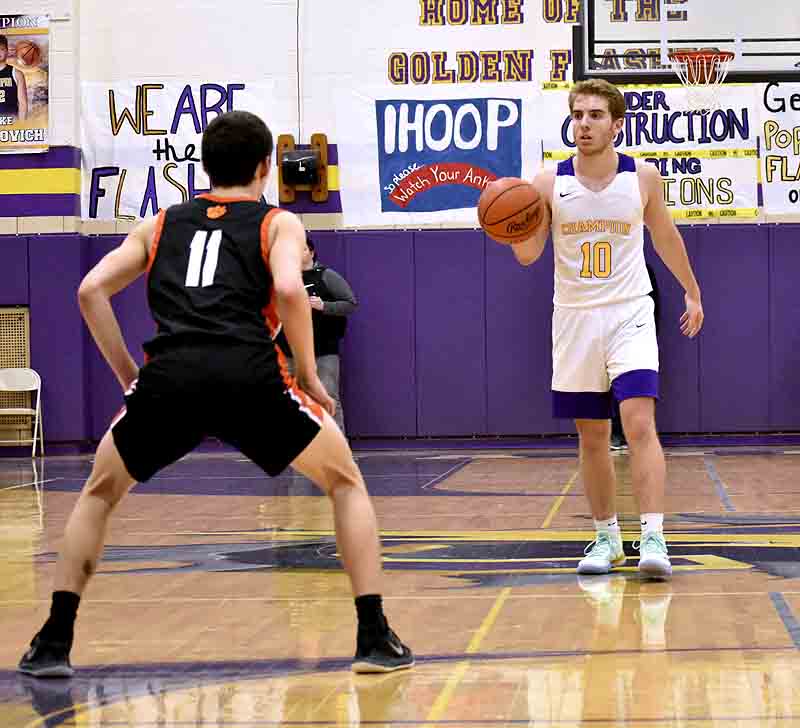 “(Champion) took a 56-54 lead with a 3-pointer (by Chase Lindsay) with around 3 minutes left and we never let them score again,” Sembach said. “I thought we showed a lot of poise right there, with Josh, Joey and Adam Honeycutt leading the way. Cole scored a pair of buckets under pressure and off good passes in that stretch.”

The Golden Flashes (7-7, 3-4) had consecutive turnovers and a missed jumper during the game-ending stretch.

“I think we spent a lot of energy and effort to get back into the game after that rough second quarter, and we looked a little slow and made some bad passes there in the final two and a half minutes with the game on the line,” Champion coach Nathan Kish said. “It was a tough hole to climb from. I was glad to see the fight, but you can’t beat a team as good as Newton Falls when you don’t play well for a full four quarters.”

Bayus left the game with his third foul when Newton Falls had a 16-12 lead. The Flashes stayed right with the Tigers and trailed just 26-23 with 2:47 left in the half. That’s when the Tigers exploded for a 13-0 run that spanned just 2:05. Adam Honeycutt began and ended the flurry with 3-pointers and he scored 11 of his 13 points in that stretch.

“We’ve got a lot of playing experience and leadership and I think we move the ball around well,” said Josh Honeycutt, who finished with 20 points. “It’s fun playing with this group because we can all score and we play strong defense. I think we lost a bit of our defensive focus there for a while and we knew coming in here that we’d get Champion’s best.”

Bayus scored 14 points in less than three quarters of playing time. He sat briefly in the first period after getting two fouls, played 16 seconds in the second quarter and eventually fouled out with 18 seconds remaining in the game. Austin Willforth scored 15 points to lead Champion and Nick Stahlman supplied 12 points. Lindsay scored nine, all on 3-pointers.

“We felt we could play right with them, but we got into some foul trouble in the second quarter and that’s when (Newton Falls) made their big run on us,” Kish said. “We knew we had to have Abe Bayus in there to protect the rim and when he got his third foul (at the 7:44 mark of the second quarter), we had to sit him. Things kind of fell apart late in the half.”